The International Campaign to Abolish Nuclear Weapons (ICAN) just won the Nobel Peace Prize. I am on the Global Council of Abolition 2000, a member of ICAN, instrumental in the Nuclear Ban Treaty, I wrote about last week HERE. 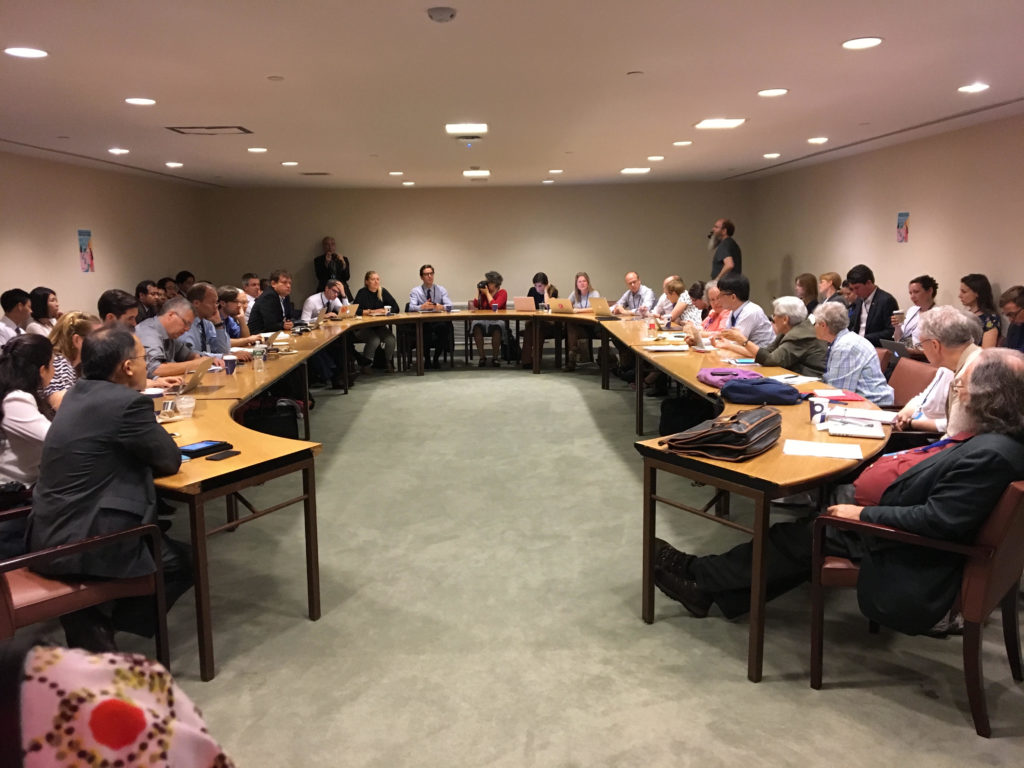 At the 3 week negotiations for a Treaty on the Prohibition of Nuclear Weapons July 6, 2017, ICAN meeting of civil society at our UN conference room, preparing for the approval of the Treaty on July 7.

July 7, after approving the Ban Treaty, joy and gratitude: 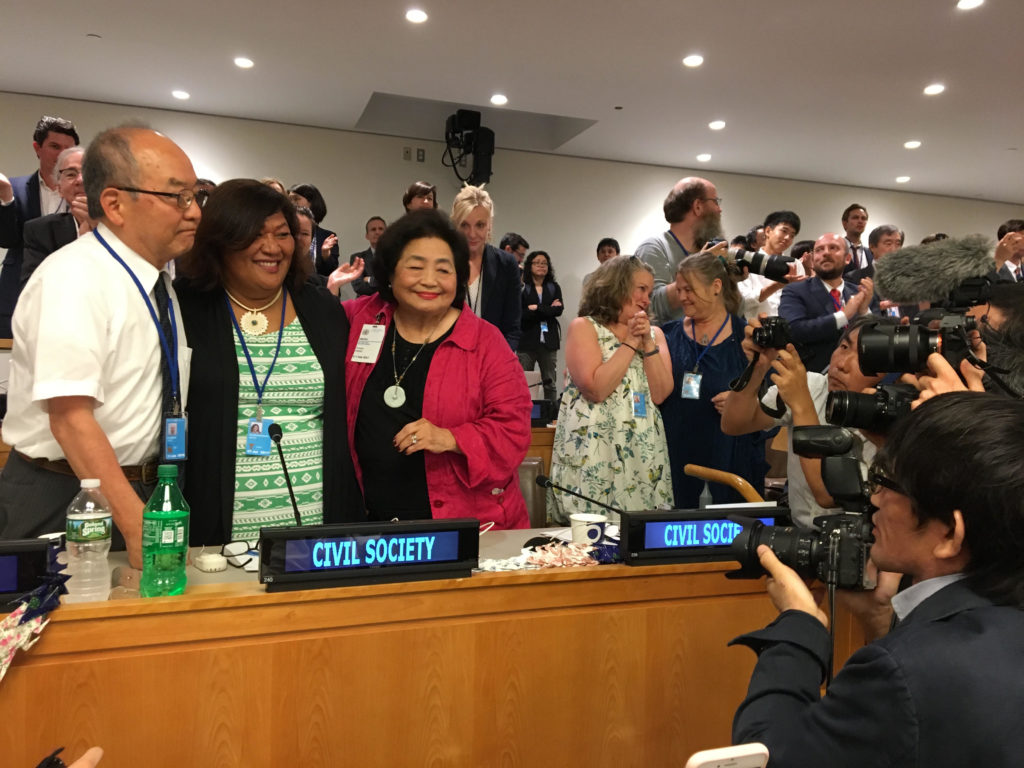 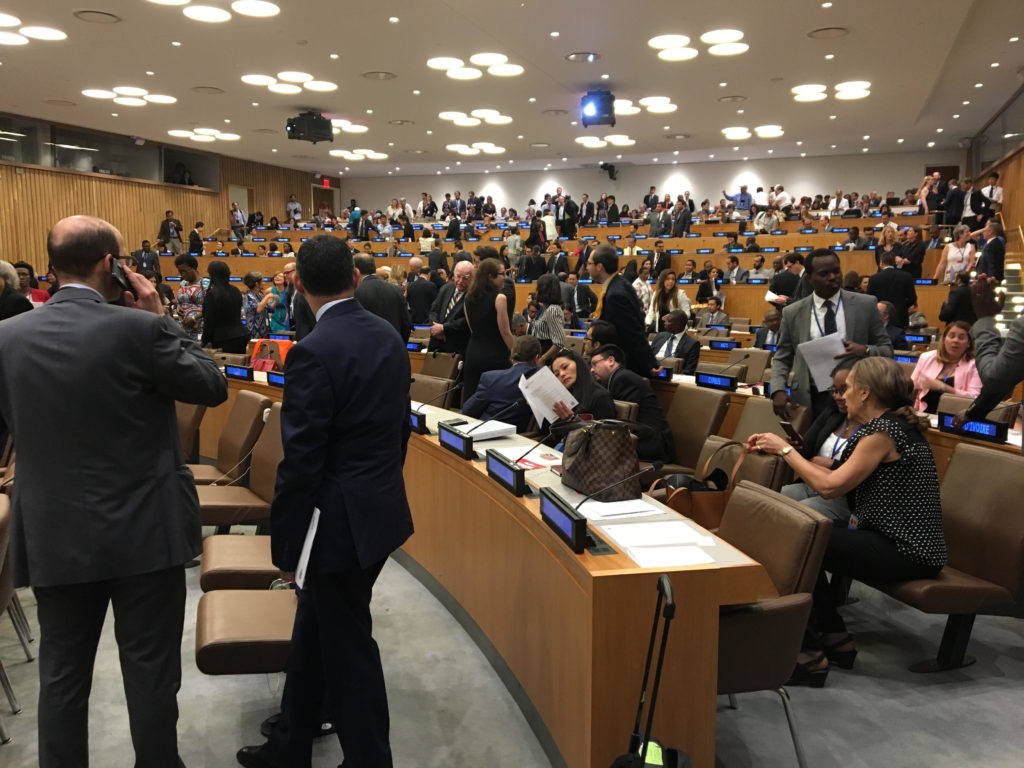 Virtually no one is addressing the underlying causes, including war itself. We can pioneer the next frontier – an initiative addressing underlying causes, highlighting the concept of “second order change” to accelerate the evolving body of work towards replacing war and transcending nukes.

The Ban Treaty shifts collective dynamics. The Nobel Peace Prize magnifies this by quantum leaps, opening the door wider for us to enter.

I remember my Aha! moment when discovering the TRANSCEND method of transforming conflicts, like my “Aha!” learning the concept of “Second Order Change” in family therapy and systems theory. Rather than treating the symptom (eliminating nuclear weapons), you treat the relationship system, the underlying conflict. See the nine-dot problem HERE from the book Change: the principles of problem formation and problem resolution, Watzlawick, P.,Weakland, J.,  & Fish, R..1974

These ideas instantly opened up of a new category of thinking and possibilities for solving problems, simply explaining a compelling, promising, and self-evident phenomenon, like learning something I didn’t know that I already knew.

Recently, I discovered a concept about not having enough concepts. Reading cognitive linguist George Lakoff’s work on framing, I discovered “hypocognition,” another Aha. It means low thinking, the inability to see things or have ideas for which we have no language or framework.

“Hypocognition,” was coined by Robert Levy, psychiatrist and anthropologist. He observed people in Tahiti with no words for “grief” and “sorrow,” necessary to express human experiences. Instead, people described themselves as feeling “sick” or “strange” afterwards.

Dominant thought forms shape thinking and feeling in ways that limit ideas about what is possible. We need words, frames, concepts and categories that allow us to imagine transformative solutions. 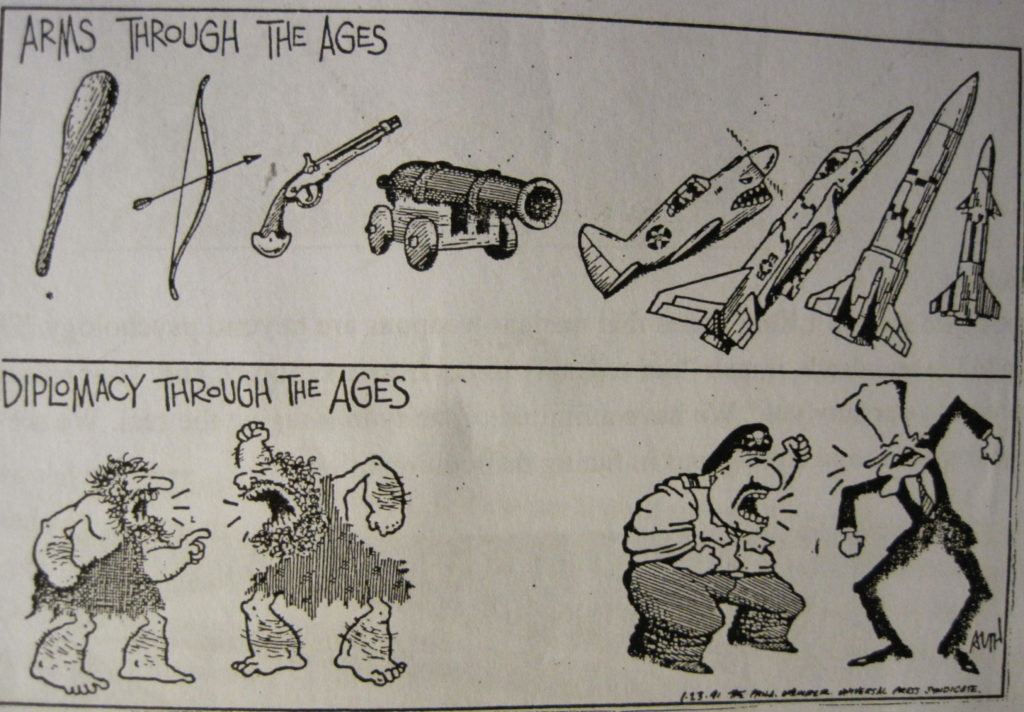 The Belief in Coercion

The US mindset, among others, emphasizes egocentric, one-sided rhetoric, policies, tactics and strategies that embrace coercion – pressure, punishment, sanctions, isolation, threats, deterrence and violence.  They do not consider knowledge about conditions under which coercion provokes escalation– akin to political malpractice. Johan Galtung has written about the “Naïve theory of sanctions.”

Claiming diplomacy doesn’t work with “those people,” they can’t be trusted, and only understand “force,” we apply more and more pressure. Pundits forget or misrepresent the successes of the negotiated Agreed Framework under Clinton in halting NK’s nuclear program and improving relations, which deteriorated when Bush called them the “axis of evil” and threatened them.

Now, in tit-for-tat escalation, threats, provocative military exercises and severe sanctions are followed missile and nuclear tests. Kim’s behavior is anything but unpredictable.

TRANSCEND provides a methodology for “second order change,” offering viable, creative solutions to problems that seem insurmountable.” It is more attractive and sustainable than “conflict resolution” and compromise in which both parties feel dissatisfied.

“Conflict transformation” creates a new reality that includes and transcends the needs and goals of both parties, using analysis, diagnosis, prognosis and therapy to bridge incompatible goals, to identify legitimate goals of basic human needs for safety, respect, dignity, identity and sovereignty.

For example, Johan Galtung transformed an eight-year conflict between Peru and Ecuador over land, by creating an international peace park that would benefit both countries.

We can correct for hypocognition, by teaching new ways of thinking, and demystification of flawed concepts. I coined “Benecognition™” meaning beneficial thinking, language, frames, and concepts that increase options for creative solutions, and hopefully “Ahas.” Here are some examples.

Quantum physics, a deeper theory of nature, deals with subatomic energy and fields. Quantum Politics understands complexity, unseen forces, psychology, perspective taking, empathy and deep cause and effect, including time, history and memory of past trauma and the need for healing.

Coercive policies produce blowback. Absorbed by our own security needs, we overlook how our actions provoke destabilizing insecurity, fear, moral outrage, defiance, mistrust, vulnerability, feelings of inferiority and humiliation in others.

In physics, the Heisenberg Uncertainty Principle states that one cannot observe a phenomenon without accounting for the effect of the observer. Light appears as either a particle or a wave, depending on how we set up the experiment.

My “Political Heisenberg Insecurity Principle” beyond the “bad guy” mentality, understands that our actions, rhetoric and strategies influence whether an enemy, Kim Jong un, appears as static (particle) or dynamic (wave), depending on how we set up the “experiment,” whether we induce fear, humiliation and back into a corner, or reassurance and respect.

People are more dangerous when afraid, as are we. When afraid, people regress and may act impulsively. Psychologist Ralph K. White said, “The Madness that is carrying the world closer and closer to nuclear war has at its core a psychological explanation:

Each side, though fundamentally afraid, misperceives the nature of the danger it faces. Each side imagines that it faces an inherently, implacably aggressive enemy, when it actually faces an enemy as fearful as itself – an enemy driven mainly by fear, to do the things that lead to war.” (Fearful Warriors.)

During the Cuban Missile Crisis, the Kennedy brothers recognized the need to act respectfully and allow a face-saving way out. We cannot underestimate the destructive power of envy and humiliation, a cause of violence. Humiliation carries a narcissistic wound that contains an implicit demand for rectification to restore dignity.

“We are small in terms of people and area, but in terms of dignity we are the most powerful in the world. We will die in order to protect that dignity and sovereignty.”

GRIT is a strategy that creates an arms race in reverse, described by Charles Osgood. One side unilaterally initiates tension-reducing moves to be reciprocated, ratcheting down tensions, building “an atmosphere of mutual trust within which negotiations on critical military and political issues can have a better chance of succeeding.”

Deterrence, a theory, can break down under certain conditions and flip into spiral dynamics. Political psychologist Richard Ned Lebow states, “Deterrence can provoke the very behavior it seeks to prevent.” Ralph K. White, who wrote about empathy for the enemy (USSR), claimed deterrence works best when accompanied by drastic tension reduction.

Threatened parties will desire their own “deterrent,” believing that possessing the world’s greatest means of destruction means that you will be taken seriously. NK Minister Ri Yong Pil, also told Evan Osnos “The United States is not the only country that can wage a preventive war.” We need to be wise rather than tough.

The policy of Mutually Assured Destruction-MAD is resurfacing. Assuming that threatening Kim Jong un with nuclear annihilation will bring him to the table is dangerously irresponsible. Vamik Volkan, psychoanalyst and former president of the International Society of Political Psychology, observed that some would rather die physically than psychologically.

It is time for a policy of reassurance for Mutually Assured Survival.

The most experienced, mature, and wise people recommend beginning with a policy of “Freeze for freeze” whereby the US and South Korea stop joint military exercises in exchange of NK’s halting testing. This reduces tension, fear and humiliation, a face-saving way out and creates a field for dialogue and to apply the TRANSCEND method.

The way to be secure is to make your enemy more secure.

Diane Perlman, Ph.D. is a member of the TRANSCEND Network for Peace, Development and Environment and a Visiting Scholar, George Mason University School for Conflict Analysis and Resolution. dianeperlman@gmail.com. www.consciouspolitics.org

Anticopyright: Editorials and articles originated on TMS may be freely reprinted, disseminated, translated and used as background material, provided an acknowledgement and link to the source, TMS: North Korea: Quantum Politics, the TRANSCEND Method and Second Order Change, is included. Thank you.