21 Apr 2022 – On January 8th, 1918, President Woodrow Wilson proposed at the joint session of the United States Congress his Fourteen Points for the post WWI settlement. He also drafted the Covenant for the League of Nations, which was formally included in the Treaty of Versailles. For this Wilson was awarded the Nobel Peace Prize in 1919, while the Parliament of his own country was not approving the institution of the League of Nations.

After 20 million deaths in WWI and 70-85 million in WWII, a new attempt was made to prevent similar wars by creating the United Nations in 1945, initially with 50 member states. Now they are 193, but the effectiveness of the UN is highly reduced by the existence of the right of veto enjoyed, strangely, by nuclear nations within the Security Council. Once more, the interests of militaristic nations prevailed over the aim of international organisations for peace.

Professor Boaventura de Sousa Santos, a sociologist at the University of Coimbra (Portugal) has recently suggested that Europe is “sleepwalking” into another World War with its involvement in Ukraine (Transcend Media Service, 11 April 2022), which he consider a war by proxy between Russia and USA. He may have a reason to think so. After the fall of the Berlin wall, the former Soviet satellite states in Eastern Europe seized the opportunity to adopt the political structure they preferred and, of course, they decided on the model of democratic European states. At this point one would have hoped that, without a corresponding Warsaw Pact (1955–1991), NATO would have gradually dissolved as well.

No way, the weapons industries don’t disarm. The USA, which practically leads NATO (just as the Soviet Union was leading the Warsaw Pact), enrolled, on the contrary, nine ex-Soviet satellite states into its military alliance. If one considers that the United States also maintain about 800 military bases in more than 70 countries and territories abroad (UK, France and Russia have, combined, only 30 bases abroad), the preoccupations of Russia for its own “security” should have generated some preventive considerations, instead of waiting for the criminal invasion of Ukraine.

It is also of interest to note that nuclear weapons are not a deterrent to war and that they represent a danger just by existing, because of the several cases of close avoidances of a nuclear exchange following misunderstandings in communication between nuclear hostile states (Green, R. “Security without nuclear deterrence” Astron Media, Christchurch, NZ, 2010).

On the same day of the above TMS article (11 April 2022) a webinar was organized by the Bulletin of the Atomic Scientists on the theme of the Ukraine war and the possibility of nuclear weapons being used. Three very qualified guest speakers (Francesca Giovannini, Harvard University; Pavel Podvig, Princeton University; Manpreet Sethi, National Defense College of New Delhi) were followed by 250 participants (me included, ID 87161898979). The speakers generally discarded the danger that nuclear weapons could be used and discussed the possibility of reaching a peace agreement. Interestingly, at one point Prof. Giovannini exclaimed “I am shocked by the absence of the United Nations”.

The participants were instructed to send short questions for individual speakers, who chose which one to answer. I sent the following question:

“Why the media, governments and our speakers ignore the current UN resolution of eliminating nuclear weapons?”

In fact, the very existence of nuclear weapons has strongly inhibited the effectiveness of military assistance to Ukraine. I was shocked by the following statement of Dr Podvig towards the end of the program:

“I have noticed that one participant has mentioned the UN resolution about prohibiting nuclear weapons. In reality, this is only a moral statement without any practical implication.”

I will send the present text to Antonio Guterres, Secretary-General of the United Nations since 2017, and ask him what he thinks about such an eccentric opinion of Dr Podvig.

To date the UN resolution of prohibiting nuclear weapons has been signed by two-thirds of member nations and signed and ratified by 57 member nations, which take us halfway into a legal enforcement. This historical resolution (L.41 of 27 October 2016) should be implemented as soon as possible, or the UN are just a joke. It is an anomaly that nuclear weapons are the only weapons of mass destruction not yet prohibited under international law in a comprehensive and universal manner, such as biological and chemical weapons, cluster bombs, and antipersonnel landmines (“The legality of nuclear weapons”, website DirittoConsenso, 19 June 2020; “UN resolution to ban nuclear weapons in 2017” website of ICAN -Nobel Peace Prize 2017, 23 March 2022).

Furthermore, in the same letter I will point out to Antonio Guterres that both the invasion of Ukraine and the subsequent shocking disregard for the life of civilians are particularly inappropriate events for 2022. Therefore, exceptional events require exceptional remedies. It would be an appropriate decision, I think, if the Secretary-General would exceptionally apply a temporary removal of the Russian Federation as a member of the UN.

The UN is an institution that promotes peace and their member states should demonstrate to be coherent with such an aim. The public would also find some relief from having to listen to the obscene lies about the war in Ukraine that Russian representatives systematically tell at the UN meetings. 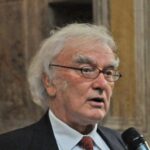 Piero P. Giorgi holds a BS Hons in Biology (Bologna) and a PhD in Neurology (Newcastle/Tyne). He has been teaching and doing research in biomedical sciences, medical history, and peace studies in six universities of four different countries (Italy, United Kingdom, Switzerland, and Australia). After 25 years at the University of Queensland, during his retirement in Australia he is continuing to study and teach about violence and nonviolence. He is currently affiliated to the University of Otago – National Centre for Peace and Conflict Studies (New Zealand) and the University of Bologna – Department of Education, MODI (Italy). Contacts: pieropgiorgi@gmail.com –  Blog: www.pierogiorgi.org

Anticopyright: Editorials and articles originated on TMS may be freely reprinted, disseminated, translated and used as background material, provided an acknowledgement and link to the source, TMS: Is the UN Able to Promote Peace in 2022?, is included. Thank you.