The Great Housing Mission of Venezuela (GMVV), launched by Commander Hugo Chávez in 2011, provides decent homes to low-income families at a low cost or free of charge, depending on their income. 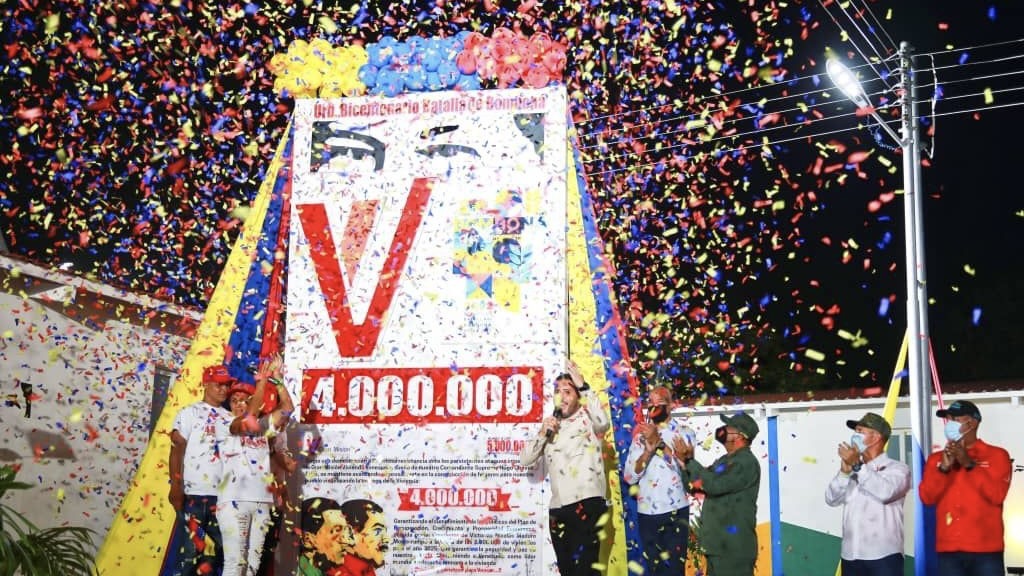 10 Apr 2022 – On April 7, the socialist government of Venezuelan President Nicolás Maduro celebrated the delivery of a record 4 million homes to its citizens as part of a social housing program called the Great Housing Mission of Venezuela (GMVV). During a joint radio and television broadcast, President Maduro emphasized that the handing over of the 4 million homes was a “historic” event and a “world record.” “Nothing and no one is going to stop us,” he added.

The GMVV’s 4 millionth house was handed over in the “Bicentennial Battle of Bomboná” urban development, located in the Sotillo municipality in Anzoátegui state by Governor Luis Marcano. During the telecast, Governor Marcano proudly reported that “those who today inhabit these 200 homes were working on its construction.”

In this regard, President Maduro ratified his commitment to continue building decent homes for the Venezuelan people, and vowed to deliver 5 million homes by 2024. “Today we reached the record of 4 million homes of the Great Housing Mission of Venezuela, built by the hands of laborers, community members, and workers. I swear to you that we are going to reach 5 million homes, that is the goal for the months of April and May of the year 2024,” he said.

The head of state highlighted that his country is a world leader in guaranteeing housing rights despite suffering from the economic blockade imposed by the United States and the European Union. “We are the government that has built the most houses, you will never see this (news) in the big Western media, which have waged a media war against Venezuela and those we have defeated,” he said. The president also stressed that the government achieved the milestone in the midst of the crisis due to the COVID-19 pandemic.

President Maduro recalled that the GMVV was an initiative promoted by Commander Hugo Chávez to provide decent housing to the Venezuelan working class, and thereby “demonstrates the success of the Bolivarian socialist model.”

The Venezuelan president also made a series of announcements to strengthen the housing program for the benefit of the population.

He announced the revival of the production by the State company Petrocasa, guaranteeing the supply of raw material by Pequiven, to achieve a production plan of 15,000 metric tons of processing PVC (polyvinyl chloride) components by 2024 and boost the manufacturing of doors, panels, windows, and other inputs with the material.

Likewise, he ordered to revolutionize the financial apex of the GMVV with a method of capturing private sources of resources under the modality: invest, save and build your home with the incorporation of the stock market, which will be executed using the Petro Inmobiliario mechanism.

The Great Housing Mission was launched by Commander Chávez in 2011 to provide safe and dignified homes to families affected by the intense rains recorded between the end of 2010 and the beginning of 2011. Subsequently, the program was extended to the rest of the population to tackle affordable housing shortages in the country. Under the social program, the government builds and allocates homes to low-income people at a low cost or free of charge, depending on their income.