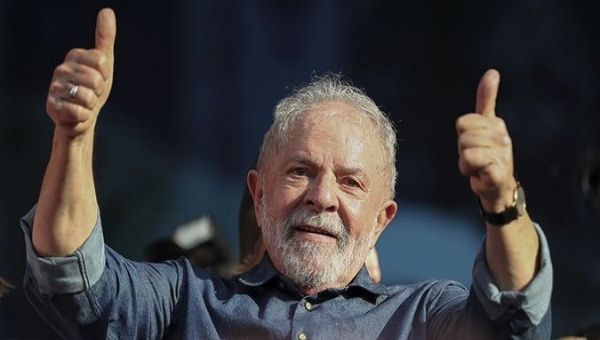 Lula remains the top favorite for the presidential election with 44 percent support and Bolsonaro with 30 percent. may. 07, 2022.  Photo: @_infoLibre

Luiz Inácio Lula da Silva, founder of the Workers’ Party (PT) and former president, presented  his pre-candidacy on Saturday, 7 May. Lula reiterated his aspiration to “lead Brazil back to the future, through the paths of sovereignty, development, justice and social inclusion, democracy and respect for the environment”.

“It is a very special moment in my life, special for counting on you, for being able, for the first time, to unite all the progressive political forces around my campaign”, said Lula at the event in Sao Paulo to launch the Vamos Juntos Por Brasil movement, which gathers political parties, unions and personalities supporting his pre-candidacy.

He pointed out that “we want to return (to power) so that nobody dares to challenge democracy again. And thus fascism returns to the sewer of history, where it should never have come from”.

He said that “we have a dream. We are moved by hope. And there is no greater strength than the hope of a people who know that they can be happy again”.

For Lula, the country is going through a grave crisis, “one of the most serious in our history, obliges us to overcome possible differences to build together an alternative path to the incompetence and authoritarianism that govern us”.

At the same event, former governor Gerardo Alckmin, electoral dupla of the former labor leader as vice president, denounced the situation in which Bolsonaro’s government is destroying Brazil and Lula is the “only path” of hope in the country.

“The upcoming elections will be a great test for our democracy. Lula is today the hope that Brazil has left. He is not the first, nor the second, nor the third, he is the only path of hope for Brazil”, remarked Alckmin, in his statement transmitted by video at the Expo Center Norte in São Paulo.

"We need to change #Brazil once again.. We need to return to a place where no one ever dares to defy democracy again. We need to send fascism back to the sewer of history, where it should have been all along," #Lula Da Silva stated at a rally in #SaoPaulo.https://t.co/v00j2f2GVc

The former president certified that he aspires to represent a coalition of seven center-left parties in the polls. “To those who have not yet joined us, our arms are open to receive all those who want to recover this country”, he insisted.

To date, the petista leader remains the top favorite for the presidential election with 44 percent support and Bolsonaro with 30 percent, according to the latest poll prepared by the Institute of Social, Political and Economic Research and commissioned by the firm XP Investimentos.