‘By Deliberately Ignoring Risk, the World Is Bankrolling Its Own Destruction’

20 May 2022 – It is often said that a pessimistic person is an optimistic but well-informed person. Here, a good number of people may believe that human wit and inventiveness are capable of facing both the current and the looming disasters, like the impact of climate change, for instance. 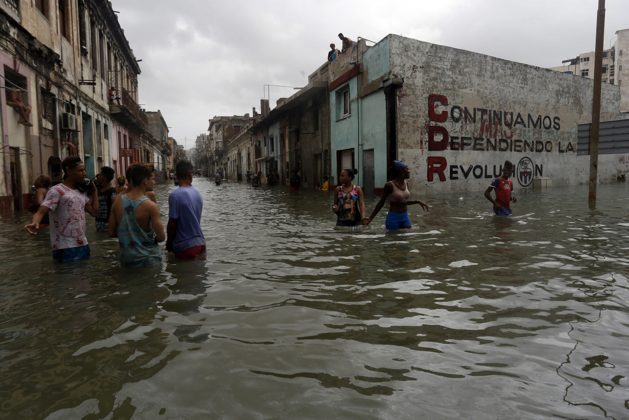 “The good news is that human decisions are the largest contributors to disaster risk, so we have the power to substantially reduce the threats posed to humanity, and especially the most vulnerable among us” Credit: Jorge Luis Baños/IPS

Others, instead, may think that such human ingenuity will once more address the symptoms rather than the causes provoking them. Thus, they would be right to want to be informed and aware of the root causes of such disasters in order to push for eradicating them.

Anyway, and regardless of people’s level of optimism or informed-optimism, the big problem may fall on the shoulders of ruling politicians, those who are so heavily influenced by big business that they act as mere decision-announcers rather than makers.

Likewise the other international specialised bodies and the world’s scientific communities, the UN Office for Disaster Risk Reduction (UNDRR) reminds that human activity and behaviour is contributing to an increasing number of disasters across the world, putting millions of lives and every social and economic gain in danger.

The risks of optimism and underestimation

Its Global Assessment Report specifically blames these disasters on “a broken perception of risk based on optimism, underestimation and invincibility,” which leads to policy, finance and development decisions that exacerbate existing vulnerabilities and put people in danger.

“The world needs to do more to incorporate disaster risk in how we live, build and invest, which is setting humanity on a spiral of self-destruction,” said Amina J. Mohammed, United Nations Deputy Secretary General, who presented the report Global Assessment Report on Disaster Risk Reduction 2022.

“By deliberately ignoring risk and failing to integrate it in decision making, the world is effectively bankrolling its own destruction. Critical sectors, from government to development and financial services, must urgently rethink how they perceive and address disaster risk”

“Disasters can be prevented, but only if countries invest the time and resources to understand and reduce their risks,” said Mami Mizutori, Special Representative of the UN Secretary-General for Disaster Risk Reduction and Head of UNDRR.

“By deliberately ignoring risk and failing to integrate it in decision making, the world is effectively bankrolling its own destruction. Critical sectors, from government to development and financial services, must urgently rethink how they perceive and address disaster risk.”

Meanwhile, the scale and intensity of disasters are increasing, with more people killed or affected by disasters in the last five years than in the previous five, and the number of disaster events is projected to reach 560 a year – or 1.5 disasters a day – by 2030.

Adding to the long term impacts of disasters is the lack of insurance to aid in recovery efforts to build back better. Since 1980, just 40% of disaster-related losses were insured while insurance coverage rates in developing countries were often below 10%, and sometimes close to zero, the report said.

A growing area of risk is around more extreme weather events as a result of climate change, recalls the group of experts from around the world who drafted the report as a reflection of the various areas of expertise required to understand and reduce complex risks.

In it, they called for reforming national budget planning to consider risk and uncertainty, while also re-configuring legal and financial systems to incentivise risk reduction.

“The good news is that human decisions are the largest contributors to disaster risk, so we have the power to substantially reduce the threats posed to humanity, and especially the most vulnerable among us.”

Such reiterated calls for reframing countries’ national budgets to address the priority areas, including disaster prevention and risk reduction, have been shockingly falling in deaf ears.

How else to explain that in 2021, the world military expenditure passed 2 trillion US dollars for the first time, according to the Stockholm International Peace Research Institute (SIPRI), which has also informed that global nuclear arsenals grow as states continue to modernise, thus sharply increasing the dangers of an unimaginable number of victims of the most devastating death machinery?.

There is always enough money to fund destruction

Also, how to passively hear that a number of European countries have just doubled their military budgets amidst a looming economic and social crisis impacting their citizens?

And how else to explain that the world’s politicians continue to subsidise fossil fuel with six trillion dollars in just one year, being fully aware that such fuels harvest the lives of millions of humans?

The unwanted to be seen war on Nature

“Humanity is waging war on nature. This is senseless and suicidal. The consequences of our recklessness are already apparent in human suffering, towering economic losses and the accelerating erosion of life on Earth,” said António Guterres, the UN Secretary General, in his forward to the recent report “Making Peace with Nature: A scientific blueprint to tackle the climate, biodiversity and pollution emergencies.”

Too many empty promises

Meanwhile, none of the agreed global goals for the protection of life on Earth and for halting the degradation of land and oceans has been fully met.

For instance, by deliberately ignoring the growing risks, three-quarters of the land and two thirds of the oceans are now impacted by human activities.

And one million of the world’s estimated 8 million species of plants and animals are threatened with extinction, while many of the ecosystem services essential for human well-being are eroding.

Also, how else do you understand that nearly 1 billion people worldwide live in extreme poverty and are disproportionately affected by stoppable and preventable land degradation, which threatens their shelter, food, water and income?