John Shipton said Julian Assange was stripped naked and put in an empty cell to prevent him from killing himself over the home secretary’s decision to sign his extradition order. 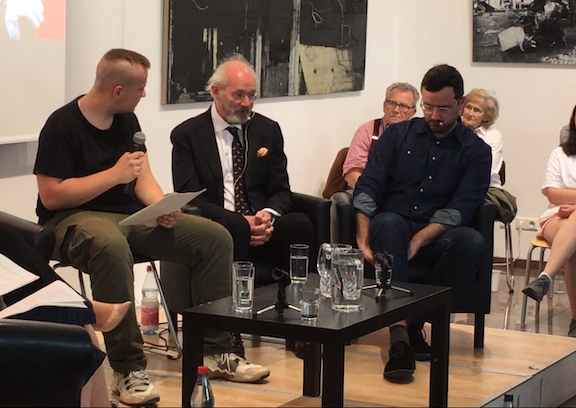 22 Jun 2022 – After British Home Secretary Priti Patel signed Julian Assange’s extradition order on Friday [17 Jun] the authorities in Belmarsh prison stripped Julian Assange and threw him into a completely empty cell in an attempt to prevent his suicide, Assange’s father has said.

It was just one more instance in which the prison humiliated his son, Shipton told  a rally on Tuesday night at the offices of the junge Welt newspaper in Berlin. About 300 people attended, with an overflow crowd watching on close circuit TV in the courtyard.

“The ceaseless malice that has descended upon Julian,  a deluge of malice, the strip-searching of Julian … this is the latest humiliation,” Shipton said. “The staff of the jail, their concern after hearing he has to be extradited to the United States, thought he may commit suicide. Their solution was to strip him naked, and put him in a bare cell.”

Testimony was heard from expert defense witnesses during Assange’s extradition hearing that he might try to end his life in prison once he learned he was going to the United States.

It is not the end of the road for Assange legally, however. His lawyers have until July 1 to file for an appeal of Patel’s decision to the High Court.  They also intend to apply for a cross appeal of issues such as the political nature of the charges, the threat to free speech and the reported C.I.A. plot to kidnap or kill Assange before his arrest.

Shipton and Gabriel Shipton, Assange’s brother, are in Berlin to lobby the German government to put pressure on the United States to drop the case against Assange.

But Shipton said he would like to hear a public statement from Germany in support of his son. “We’d like Tobias to confirm what he’s said.”

A German government spokesman on Monday said however that Germany was unlikely to intervene with either the U.K. or the U.S. “This is a legal process that is already in motion, so I would be a little wary of political intervention,” he said, the French Press Agency (AFP) reported.

Joe Lauria is editor-in-chief of Consortium News and a former correspondent for The Wall Street Journal, Boston Globe and numerous other newspapers, including The Montreal Gazette and The Star of Johannesburg. He was an investigative reporter for the Sunday Times of London, a financial reporter for Bloomberg News and began his professional work as a 19-year old stringer for The New York Times. Email: joelauria@consortiumnews.com