‘Rationality Is Not Permitted’: Chomsky on Russia, Ukraine and the Price of Media Censorship 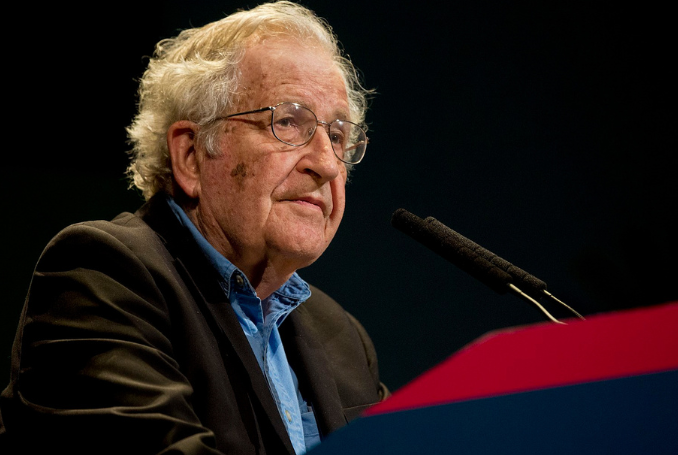 23 Jun 2022 – One of the reasons that Russian media has been completely blocked in the West, along with the unprecedented control and censorship over the Ukraine war narrative, is the fact that western governments simply do not want their public to know that the world is vastly changing.

Ignorance might be bliss, arguably in some situations, but not in this case. Here, ignorance can be catastrophic as western audiences are denied access to information about a critical situation that is affecting them in profound ways and will most certainly impact the world’s geopolitics for generations to come.

The growing inflation, an imminent global recession, a festering refugee crisis, a deepening food shortage crisis and much more are the kinds of challenges that require open and transparent discussions regarding the situation in Ukraine, the NATO-Russia rivalry and the responsibility of the West in the ongoing war.

To discuss these issues, along with the missing context of the Russia-Ukraine war, we spoke with Professor Noam Chomsky, believed to be the greatest living intellectual of our time.

Chomsky told us that it “should be clear that the (Russian) invasion of Ukraine has no (moral) justification.” He compared it to the US invasion of Iraq, seeing it as an example of “supreme international crime.” With this moral question settled, Chomsky believes that the main ‘background’ of this war, a factor that is missing in mainstream media coverage, is “NATO expansion”.

“This is not just my opinion,” said Chomsky, “it is the opinion of every high-level US official in the diplomatic services who has any familiarity with Russia and Eastern Europe. This goes back to George Kennan and, in the 1990s, Reagan’s ambassador Jack Matlock, including the current director of the CIA; in fact, just everybody who knows anything has been warning Washington that it is reckless and provocative to ignore Russia’s very clear and explicit red lines. That goes way before (Vladimir) Putin, it has nothing to do with him; (Mikhail) Gorbachev, all said the same thing. Ukraine and Georgia cannot join NATO, this is the geostrategic heartland of Russia.”

Though various US administrations acknowledged and, to some extent, respected the Russian red lines, the Bill Clinton Administration did not. According to Chomsky, “George H. W. Bush … made an explicit promise to Gorbachev that NATO would not expand beyond East Germany, perfectly explicit. You can look up the documents. It’s very clear. Bush lived up to it. But when Clinton came along, he started violating it. And he gave reasons. He explained that he had to do it for domestic political reasons. He had to get the Polish vote, the ethnic vote. So, he would let the so-called Visegrad countries into NATO. Russia accepted it, didn’t like it but accepted it.”

“The second George Bush,” Chomsky argued, “just threw the door wide open. In fact, even invited Ukraine to join over, despite the objections of everyone in the top diplomatic service, apart from his own little clique, Cheney, Rumsfeld (among others). But France and Germany vetoed it.”

However, that was hardly the end of the discussion. Ukraine’s NATO membership remained on the agenda because of intense pressures from Washington.

“Starting in 2014, after the Maidan uprising, the United States began openly, not secretly, moving to integrate Ukraine into the NATO military command, sending heavy armaments and joining military exercises, military training and it was not a secret. They boasted about it,” Chomsky said.

What is interesting is that current Ukrainian President Volodymyr Zelensky “was elected on a peace platform, to implement what was called Minsk Two, some kind of autonomy for the eastern region. He tried to implement it. He was warned by right-wing militias that if he persisted, they’d kill him. Well, he didn’t get any support from the United States. If the United States had supported him, he could have continued, we might have avoided all of this. The United States was committed to the integration of Ukraine within NATO.”

The Joe Biden Administration carried on with the policy of NATO expansion. “Just before the invasion,” said Chomsky, “Biden … produced a joint statement … calling for expanding these efforts of integration. That’s part of what was called an ‘enhanced program’ leading to the mission of NATO. In November, it was moved forward to a charter, signed by the Secretary of State.”

Soon after the war, “the United States Department acknowledged that they had not taken Russian security concerns into consideration in any discussions with Russia. The question of NATO, they would not discuss. Well, all of that is provocation. Not a justification but a provocation and it’s quite interesting that in American discourse, it is almost obligatory to refer to the invasion as the ‘unprovoked invasion of Ukraine’. Look it up on Google, you will find hundreds of thousands of hits.”

Chomsky continued, “Of course, it was provoked. Otherwise, they wouldn’t refer to it all the time as an unprovoked invasion. By now, censorship in the United States has reached such a level beyond anything in my lifetime. Such a level that you are not permitted to read the Russian position. Literally. Americans are not allowed to know what the Russians are saying. Except, selected things. So, if Putin makes a speech to Russians with all kinds of outlandish claims about Peter the Great and so on, then, you see it on the front pages. If the Russians make an offer for a negotiation, you can’t find it. That’s suppressed. You’re not allowed to know what they are saying. I have never seen a level of censorship like this.”

Regarding his views of the possible future scenarios, Chomsky said that “the war will end, either through diplomacy or not. That’s just logic. Well, if diplomacy has a meaning, it means both sides can tolerate it. They don’t like it, but they can tolerate it. They don’t get anything they want, they get something. That’s diplomacy. If you reject diplomacy, you are saying: ‘Let the war go on with all of its horrors, with all the destruction of Ukraine, and let’s let it go on until we get what we want.’”

By ‘we’, Chomsky was referring to Washington, which simply wants to “harm Russia so severely that it will never be able to undertake actions like this again. Well, what does that mean? It’s impossible to achieve. So, it means, let’s continue the war until Ukraine is devastated. That’s US policy.”

Most of this is not obvious to western audiences simply because rational voices are “not allowed to talk” and because “rationality is not permitted. This is a level of hysteria that I have never seen, even during the Second World War, which I am old enough to remember very well.”

While an alternative understanding of the devastating war in Ukraine is disallowed, the West continues to offer no serious answers or achievable goals, leaving Ukraine devastated and the root causes of the problem in place. “That’s US policy”, indeed.

The interview with Noam Chomsky was conducted jointly with Italian journalist Romana Rubeo.

One Response to “‘Rationality Is Not Permitted’: Chomsky on Russia, Ukraine and the Price of Media Censorship”