Colombia’s First Leftist President Will Bring Historic Change, if the US Lets Him

Colombia is the latest Latin American country to turn from the right, and possibly stand up to Washington, with the inauguration of ex-guerrilla President Gustavo Petro. 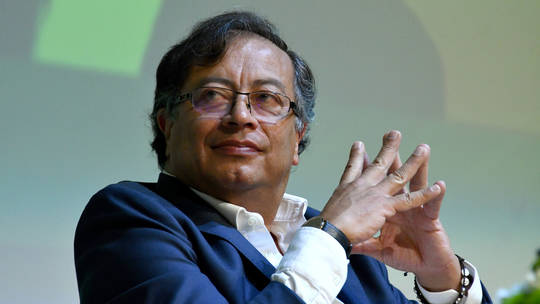 7 Aug 2022 – It’s a historic day in Colombia, as the country inaugurates former guerrilla Gustavo Petro as its first leftist president, and Francia Marquez as its first vice president of African descent. This was unthinkable not long ago, and before this unlikely team now lie the combined challenges of standing up to US domination and fixing decades of social injustice.

The last time it appeared Colombia would have a leftist president was in 1948 with the candidacy of the fiery and popular Liberal Party leader Jorge Gaitan. Tragically, Gaitan was assassinated before the election, leading to the period of ‘La Violencia’, in which between 200,000 and 300,000 Colombians were killed over the following decade. In the melee which immediately followed Gaitan’s assassination, a young Fidel Castro and Gabriel Garcia Marquez, who would later become life-long friends, would briefly encounter each other in the streets of Bogota. It is uncertain who was behind the assassination of Gaitan, though one of the main versions, and certainly my belief, is that it was the newly-created CIA, which became the US’ regime-change instrument for decades to come.

Even after La Violencia, Colombia has continued to be marked by gruesome political violence, even to the present time, with over 220,000 killed in such violence since 1958. In recent years, this violence has mostly been carried out by US-backed military and paramilitary death squads closely aligned with the right-wing governments which have seamlessly governed Colombia since 2002. The state violence since 2002 has been staggering, with the military murdering at least 6,400 and possibly 10,000 people from 2002 to 2008 alone. Meanwhile, over 92,000 Colombians have been disappeared, and over 5 million Colombians are internally displaced, amounting to one of the largest numbers of internally-displaced people in the world.

Given this landscape and the numerous death threats both Petro and Marquez received during the presidential campaign, and for years before, many have feared they could suffer the same fate as Gaitan. Indeed, the two campaigned behind bullet-proof shields to protect them from the very real threat of assassination. This threat has not abated simply because they have been elected, and just surviving their full term in office will be a very real feat.

The threat Petro and Marquez pose to the system and powers-that-be, both in Colombia and Washington, is their promise to break the hold that the rich oligarchs have had over Colombia for centuries and to redistribute wealth by shifting the tax burden and boosting the social safety net in order to benefit the poor and the disenfranchised indigenous and black population. Colombia is, by design, one of the most unequal societies on Earth, and those on the top will not cede their wealth, land, or power easily, and the US, which dominates Colombia through this elite, will not allow this to easily happen. In addition, Colombia, the only NATO partner in this hemisphere outside of North America, is the US’ closest ally in Latin America and the base of operations to dominate the region. The US, still wedded to the Monroe Doctrine, will resist mightily any attempt of Petro and Marquez to change this.

Washington is already panicking at the fact that, with the election of the two, five of the largest economies in Latin America are now being led by leftist presidents, and this may soon become six if Luiz Inácio Lula da Silva, the current front-runner in Brazil, is re-elected this year. US officials are open about the fact that they wish to maintain control over the region’s vast resources, and these leftist presidents, who wish to use their countries’ resources for the benefit of their own people, stand in the way of this control. The head of US Southern Command, General Laura Richardson, made it clear recently that the focus of US operations in the region is to maintain control of the region’s “off the charts” resources. As she explained, “60% of the world’s lithium is in the region; you have heavy crude, you have light sweet crude, you have rare earth elements, you have the Amazon…”  The US has no intention of letting these resources slip through its fingers.

In short, the real threat of regime change looms over the new Petro/Marquez administration in Colombia, and it will take vigilance and international solidarity to ensure that this threat is not realized. Latin America desperately needs the type of social change that Petro and Marquez promise, and we must ensure that there is no repeat of the fate which befell others like Gaitan, or President Salvador Allende in Chile, who promised the same.

Daniel Kovalik teaches International Human Rights at the University of Pittsburgh School of Law, and is author of the recently-released No More War: How the West Violates International Law by Using “Humanitarian” Intervention to Advance Economic and Strategic Interests.