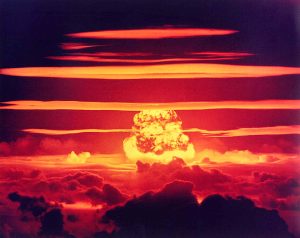 10 Aug 2022 – The Bulletin of the Atomic Scientists’ Doomsday Clock is closer to midnight than it has ever been. It’s time to get the US and the 8 other nuclear powers to sign the Treaty on the Prohibition of Nuclear Weapons.

The United Nations by a vote of 122-1 in 2017 adopted a Treaty on the Prohibition of Nuclear Weapons. It entered into the force of law on January 22, 2021, following ratification by more than 50 countries. The world’s 9 nuclear powers so far have refused to ratify the Treaty. They are now officially Nuclear OUTLAW states. Those nuclear-weapon outlaw countries are the United States, Russia, China, Great Britain, France, India, Pakistan, North Korea, and Israel.

August 6th marked the 77th anniversary of the US dropping a nuclear bomb on Hiroshima, Japan killing an estimated 237,000 people directly or indirectly out of a total population of 330,000. Aug. 9th marks Nagasaki day. The bombs were 13 kilotonnes of TNT equivalent. Nuclear weapons are now about 200-500 kilotonnes.

The escalating war tensions between the US and Russia over Ukraine, and the US and China over Taiwan raise the risk of the possible use of nuclear weapons again, by accident or design. Any use of nuclear weapons could quickly escalate to a global nuclear war, and the end of civilization, and possibly human life on earth. A major nuclear war could result in what has been called “Nuclear Winter,” where Earth temperatures plummet due to soot and debris blocking out sunlight for years. The result — crop destruction and mass starvation.

Humanity is playing with nuclear fire as if climate catastrophe was not bad enough. What’s needed are local and global grassroots peace movements to sound the alarm and demand actions to move back from the brink of nuclear destruction. We need to redirect military funding to reduce CO2 emissions, and other factors damaging the environment, and to fund other urgent unmet human needs.

Hawaii has the largest percentage of land controlled by the military of any state in the US. There are 142 U.S. military bases and installations in Hawaii that occupy 224,897 acres of Hawaiian land. It needs to be emphasized that the independent nation of Hawaii has been under 129 years of illegal US occupation. Hawaii is the US command, staging, and training ground, for nuclear war for more than half the earth’s surface. In the center of Hawaii Island, is the Pohakuloa Training Area (PTA), also known as the Pohakuloa TOXIC Area, since it is contaminated with military radiation and a toxic stew of other contaminants. PTA has been bombed for more than 75 years. PTA covers more than 133,000 acres which equals more than 200 square miles – as large as the island of Guam. B-52 and B-2 strategic nuclear bombers fly non-stop nuclear war training missions from Louisiana, Missouri, and Guam to bomb Pohakuloa. The world needs more aloha, not more bombing and war!  Ban Nukes Now!