China and Russia Partner to Inject Stability into World – SCO

China and Russia’s leaders agreed to take a guiding role as great powers to bring stability and positive energy to the world. 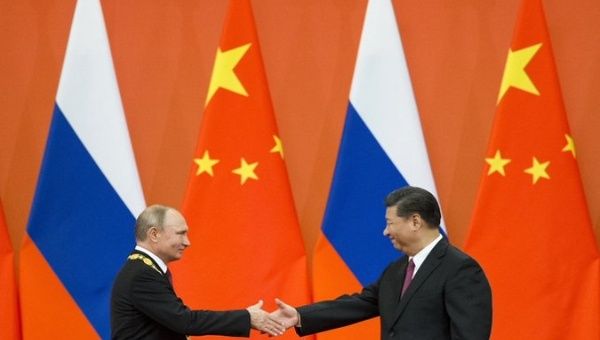 15 Sep 2022 – President Xi Jinping of China and Vladimir Putin of Russia met during the Shanghai Cooperation Organization (SCO) summit held in Samarkand, the capital of Uzbekistan.

“China is willing to make efforts with Russia to assume the role of great powers and play a guiding role to inject stability and positive energy into a world rocked by social turmoil,” said Xi Jinping.

For his part, Putin referred to the trade relationship between the two nations. Last year, the trade turnover amounted to 140 billion dollars, and in the first half of this year, it has increased by 25 percent, according to the Russian leader.

Putin praised China’s stance on the ongoing conflict in Ukraine, calling it a “balanced approach.” The president further said that Russia supports the “one-China principle” in relation to the U.S. provocative approach toward Taiwan.

JUST IN: Russian President Vladimir Putin on Thursday praised China's Xi Jinping for his "balanced" position on the Ukraine-Russia conflict, the two leaders met on the sidelines of the Shanghai Cooperation Organization (SCO) summit in Samarkand, #Uzbekistan. #SCO pic.twitter.com/Uw5CdddTW8

“Attempts to create a unipolar world have lately been quite ugly and unacceptable to the majority of nations on this planet,” Putin added.

The SCO is “an effective mechanism of multilateral cooperation,” built on “the principles of equality and mutual benefit, respect for each other’s sovereignty and refusal to interfere in internal affairs.”

Chinese purchases of Russian energy products have increased amid Europe’s attempts to reduce its dependence on Russian gas and oil and punitive Western sanctions against Moscow related to the Ukraine conflict.

The Government of #China stated that the nation remains on alert for the possibility that the U.S. government may try to increase its military presence. Foreign Minister Wang Yi stressed "the US is trying to control China through #Taiwan" pic.twitter.com/dn84bOgxUl