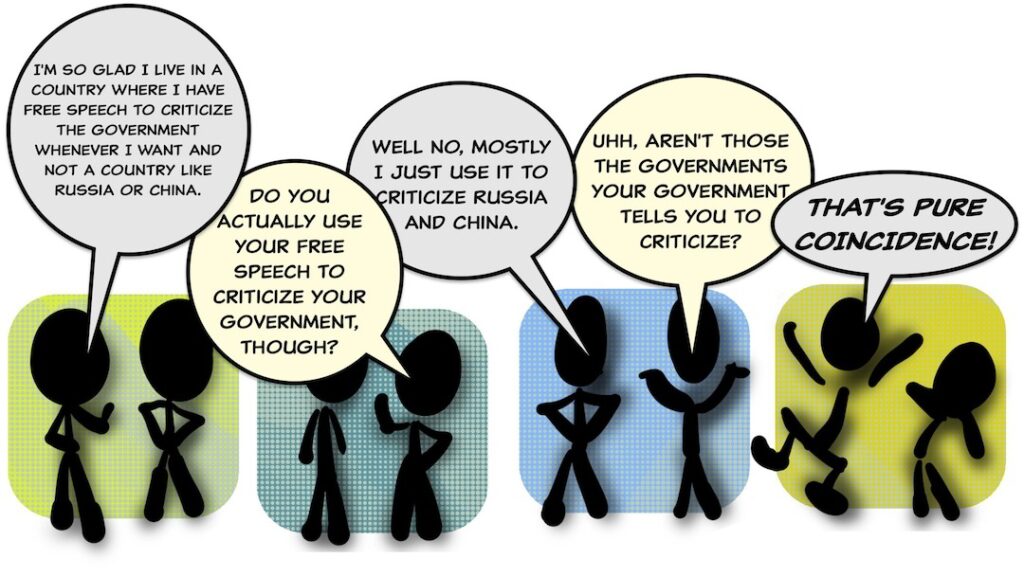 29 Aug 2022 – None are more hopelessly enslaved than those who falsely believe they are free.

None are more hopelessly ignorant than those who falsely believe they’re informed.

Free speech in a liberal western democracy means you have the freedom to say whatever you want about the abuses of your government, and the press has the freedom to hammer you with propaganda to ensure that you never do.

In a liberal western democracy you are free to criticize your government, but instead you are propagandized into criticizing the impotent puppets who get rotated in and out of office while your government continues doing all the same evil things regardless of who gets elected.

In liberal western democracies you are free to call the president “Drumpf” or “Brandon”, but you are not free to know who’s actually calling the shots in your country underneath the official government.

In liberal western democracies people say, “I’m so glad I don’t live in a country like Russia or China where people are forbidden to criticize their government. I live in the west, where I’m free to criticize Russia and China all I want.”

It doesn’t matter if you have freedom of speech if those in power can control what you will say. And in liberal western democracies, this is exactly what happens.

We grow up saturated with US empire propaganda in the west. We marinate in it. It pervades our consciousness. But because it’s all we’ve ever known, most of us don’t even notice it.

“If we were being propagandized, I’m sure we’d have heard about it in the news,” we tell ourselves.

But the news is the propaganda. And it will never report on that bombshell story.

Propaganda is the single most overlooked and underappreciated aspect of our society. In controls how the public thinks, acts, votes and behaves, but hardly anyone ever talks about it. Because the sources they’ve been trained to look to for information never say anything about it.

And they say it with complete freedom. Sure if what they’re saying goes against the interests of the western empire they won’t be allowed to speak on any large platforms where they might infect the mainstream herd with wrongthink, and sure if what they’re saying is really inconvenient they might get banned from even speaking on any of the major online platforms, but they still get to speak. Alone, where no one can hear them. Preferably into a hole in the ground.

That’s why when some people hear my objections to the empire, they say “Well at least where I live we’re allowed to criticize our government!”

If speech wasn’t free people would realize they’re being oppressed, but if people started using their speech to voice real grievances about real power, they would swiftly discover that their speech is being ignored and power is doing as it likes. So inconvenient speech is curtailed by propaganda, by censorship, by algorithm manipulation and by media marginalization.

People are kept hopelessly enslaved by giving them the illusion that they are free, and any voice which interrupts that illusion is silenced by whatever means necessary.

That’s what free speech means in a liberal western democracy. You can say whatever you like, as long as it’s what they like.