A great reformer in his country’s tormented history. 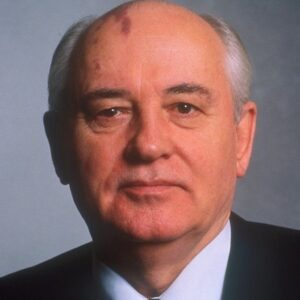 31 Aug 2022 – In March 11, 1985, Mikhail Gorbachev became leader of the Soviet Union. Within a few weeks, the full-scale reformation he attempted to carry out both inside his country and in its Cold War relations with the West, particularly the United States, began to unfold. Perestroika (“restructuring”)—as Gorbachev called his reforms—officially ended with the Soviet Union and his leadership in 1991. The historic opportunities for a better future it offered Russia—and the world—have been steadily undermined ever since.

Usually forgotten is that the wave of democratization at the end of the 20th century began in a place, and in a way, that few had expected: in Soviet Russia, under Gorbachev’s leadership as the head of the Soviet Communist Party. Indeed, the extent to which his democratic achievements during nearly seven years in power have been forgotten or obscured is a measure of historical amnesia.

Lost in historical misrepresentation are his two great achievements inside his country. By 1991, Gorbachev had led Russia closer to a real functioning democracy than it had ever been in its thousand-year history; and the parliamentary and presidential elections he introduced in 1989­­–90—in the then-Soviet system—remain Russia’s freest and fairest to date.

It seems especially important to remember this history now, when there is renewed talk about democracy and authoritarianism, and its roots and risks, and as the US shepherds countries along the presumed democratic path. Recalling Gorbachev’s evolutionary democratization reminds us that whatever the merits of various US pro-democracy programs aimed at Russia, they played no role in the onset or unfolding of democratization in Moscow. Indeed, when Russians used to say their country had more democracy under Gorbachev than later, they point out that Boris Yeltsin’s election as Soviet Russian president in June 1991 was the first and the last time in the Soviet Union’s history that the Kremlin allowed executive power to pass to an opposition candidate.

Glasnost (literally, “openness”), or the ending of seven decades of government censorship, was Gorbachev’s other signature domestic democratic reform. I worked for three months in 1989 for the leading glasnost newspaper, Moskovskie Novosti (Moscow News), and I still remember how, step by step, from 1985 to 1991, the mechanisms and taboos of censorship were dismantled, Here, too, the result was astonishing: virtual freedom of the press, both print and broadcast, at least in the national media. Russian journalists I know still regard their freedom under Gorbachev more favorably than what followed under both Yeltsin and, certainly, his successor, Vladimir Putin: oligarchical control and corruption of the media, a resurgence of state interference in their work and the killing of journalists. Gorbachev cared so deeply about glasnost, he even invested in independent journalism, committing part of his Nobel Prize money to Novaya Gazeta, and its editor Dmitry Muratov, who received the Nobel Peace Prize last year.

In October 2009, my late husband and longtime Nation contributor Stephen Cohen and I conducted a wide-ranging Nation interview with Gorbachev at his Foundation offices in Moscow. “When did the Cold War actually end?” we asked.

“Without perestroika, the Cold War simply would not have ended,” Gorbachev said. “Sometimes people ask me why I began perestroika. The domestic reasons were undoubtedly the main ones, but the danger of nuclear war was so serious that it was a no less significant factor. Something had to be done before we destroyed each other.” Gorbachev was perhaps the most radical thinker about security to ever lead a major power—and certainly the most committed arms reductionist to ever lead a nuclear country. He was revolutionary when in the 1980s he called for the abolition of nuclear weapons. And he reversed generations of perilous military buildup, a struggle among others that won him the Nobel Peace Prize. Due in large part to his leadership, by 2015, 85 percent of the US and Russian nuclear arsenals had been decommissioned from their heights.

Yet Gorbachev’s vision of an alternative security framework—“New Thinking,” as it was called—remains not only unfinished but increasingly under threat. The broken promise of no NATO expansion eastwards was a stab in Gorbachev’s back, a rebuke to his common sense and his humane vision of a “common European home” stretching from Lisbon to Vladivostok, as outlined in his 1987 UN Speech.

The escalating war in Ukraine, with its barbarism toward Ukrainians (and Russians), with its nuclear risks, led Gorbachev to a quiet despair in his last months. He began reading Pushkin at the clinic he lived in—an antidote to the news.

I could not end without a reflection on Mikhail Sergeevich, as Steve and I always called him, as a person and a friend. We were grateful to him for our visas, received in March 1985, a week after he came to power; we had been denied visas, together and individually, from 1980–82.

Our marriage coincided with perestroika. Steve spent the first day after our wedding at the UN with Gorbachev. On our first anniversary, in 1989, we were with President George H.W. Bush and Gorbachev on Malta when they declared the end of the Cold War. And we thought of our daughter, Nika, as our perestroika baby because she was conceived in Russia during the Gorbachev years, made her first visit to Moscow in July 1991, and has visited some 40 times since then.

In a moving moment, a year after his beloved wife, Raisa, died, Gorbachev remarked to Steve that our marriage and partnership reminded him of his with Raisa because we too seemed inseparable (and took walks together).

Gorbachev told Steve how deeply influenced he was by his writings, especially his biography of Nikolai Bukharin. On Steve’s 70th birthday, Gorbachev contributed to a book in his honor. “I have known Stephen Cohen a long time. We have often met and discussed various historical and political questions. These frank conversations made us friends.”

In 2020, on Steve’s passing, he wrote, “He was one of the closest people to me in his views and understanding of the enormous events that occurred in the late 1980s in Russia and changed the world.” Gorbachev continued, “I always considered Steve and you my true friends. During perestroika and all the subsequent years, I felt your understanding and unwavering support.”

Decades later, little, if anything is left of the historic opportunities Gorbachev opened up for his country and the world.

Whether or not one views Soviet democratization and the fundamental insight that true security can be achieved through demilitarization and cooperation as Gorbachev’s lost opportunity, he is nonetheless an essential figure in the modern history of democratization. As he turned 90, outliving by decades the historic breakthroughs he introduced, and having watched many of his democratic achievements being squandered, Gorbachev, always an optimist during the years I’ve known him, said he was an optimist no longer. It may be that actuarial realities had made him melancholy. In an interview in Novaya Gazeta a year or so ago, Gorbachev spoke out more bluntly than ever before against the Putin regime for undermining reforms he had introduced.

Only history will eventually decide Gorbachev’s ultimate reputation. In his own country, a younger generation has come to be interested in his era and its markers. Yet many Russians still revile him; they blame him (along with Yeltsin) for destroying the Soviet Union and for the economic and social misery that followed. Other Russians, however, view him, as I do, as a leader of vision and courage. If democracy eventually returns to Russia, Gorbachev will (and should) be remembered as the greatest reformer in that nation’s tormented history.

Katrina vanden Heuvel is editorial director and publisher of The Nation and served as editor of the magazine from 1995 to 2019. She has edited or co-edited several books, including The Change I Believe In: Fighting for Progress in the Age of Obama (2011) and Meltdown: How Greed and Corruption Shattered Our Financial System and How We Can Recover (2009).