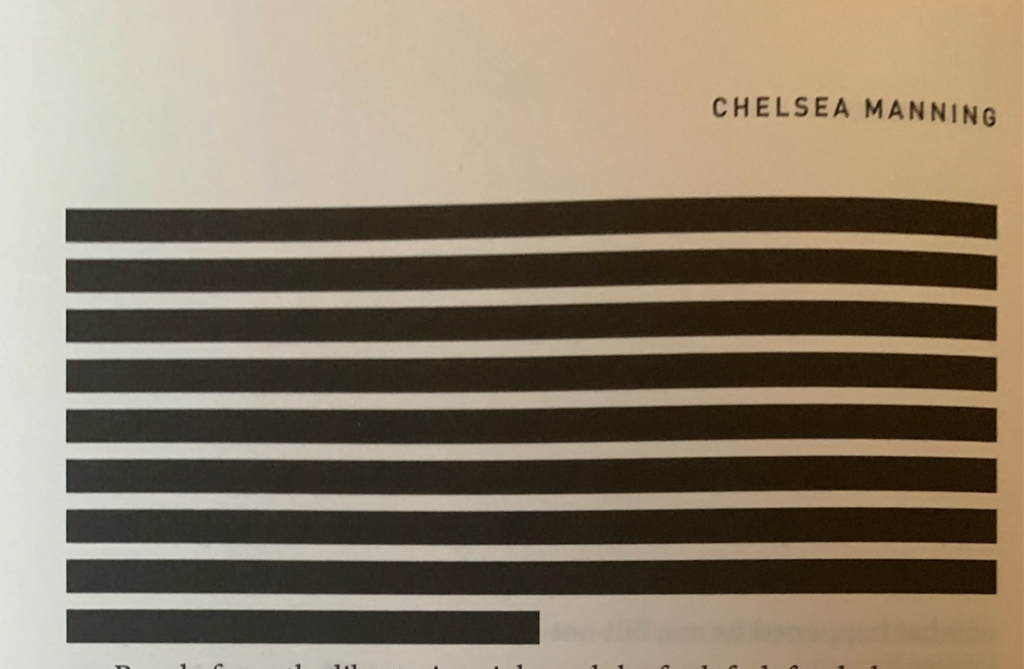 22 Oct 2022 – The United States government censored parts of Chelsea Manning’s new book, where she attempted to describe the information she provided to WikiLeaks in 2010.

Manning says she wrote README.txt because she had not really been able to tell her story, and this book was a “first draft of history” from her perspective.

“While I did testify a little bit during the court-martial, my voice has been kind of lost during this whole process,” Manning declared on “CBS Mornings.”

However, the US government used the publication review system to block her from highlighting any of the documents from the Afghanistan War Logs, Iraq War Logs, or US Embassy cables that garnered widespread news headlines. 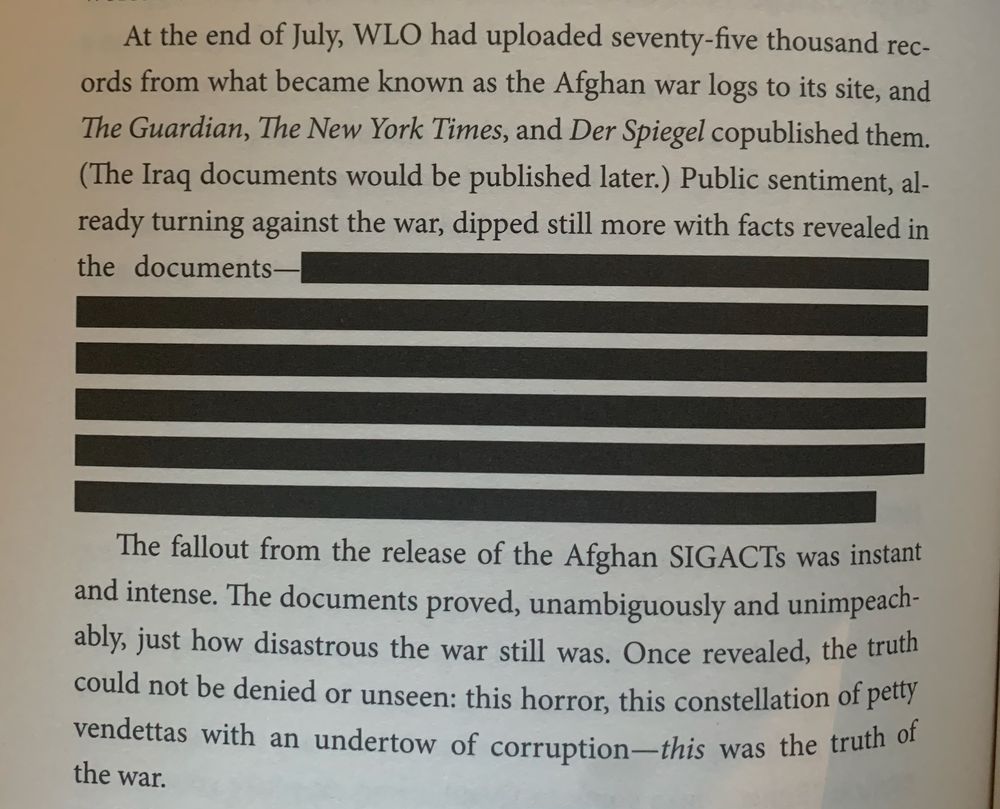 “At the end of July, WLO [WikiLeaks organization] had uploaded seventy-five thousand records from what became known as the Afghan war logs to its site, and The Guardian, The New York Times, and Der Spiegel copublished them,” Manning recalls. “(The Iraq documents would be published later.) Public sentiment, already turning against the war, dipped still more with facts revealed in the documents—”

The dash on the page leads to six black bars that hide what Manning had hoped to highlight for readers.

Text resumes with, “The fallout from the release of Afghan SIGACTS [war logs] was instant and intense. The documents proved, unambiguously and unimpeachably, just how disastrous the war still was.”

Specifics from the disaster that were detailed in the files Manning revealed are stricken from the pages.

Manning was detained and held in harsh confinement at the Quantico Marine brig when the Iraq War Logs were released. She was “too disconnected to notice, too preoccupied with surviving with my faculties intact” to know that her disclosures were still the subject of “international media attention.”

“What I now know is in late October, a larger group of journalistic outlets—The New York Times, The Guardian, Al Jazeera, Le Monde, the Bureau of Investigative Journalism, the Iraq Body Count Project, and Der Spiegel—partnered with one another and with WikiLeaks to publish the next round of disclosures: what became known as the Iraq war logs, more than 390,000 documents.” 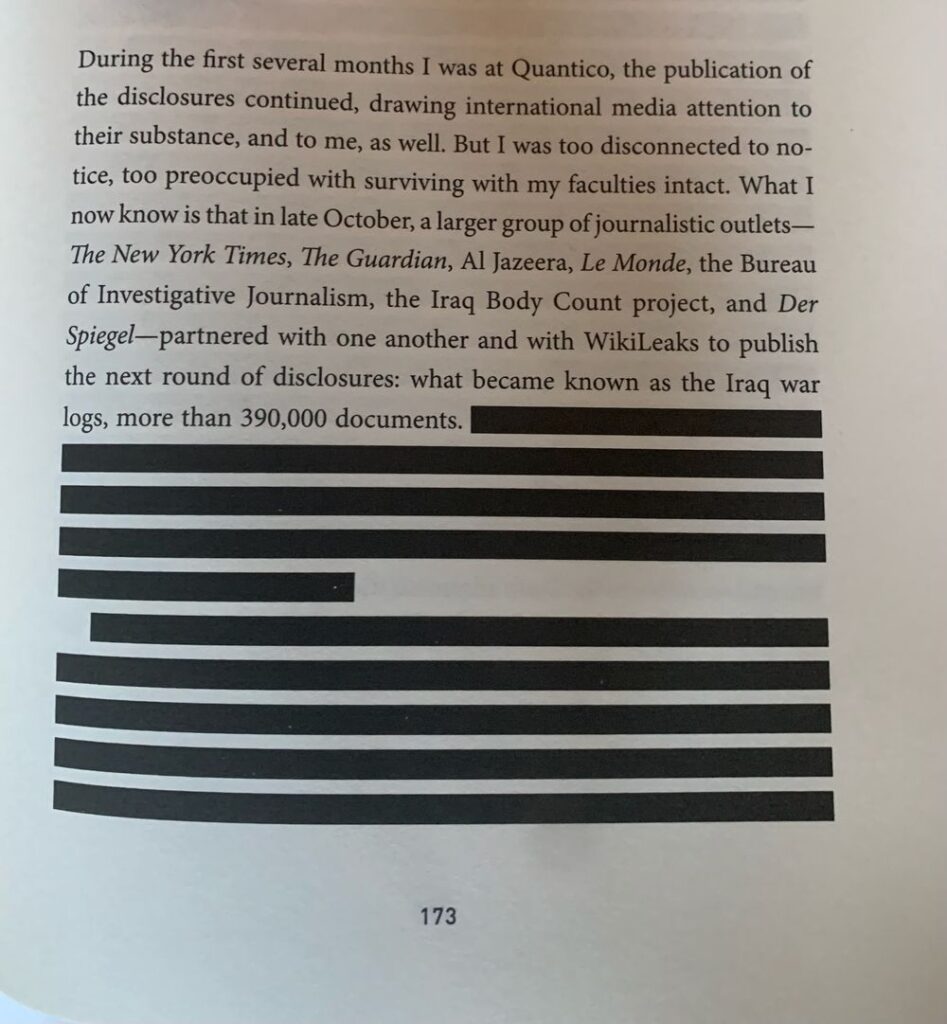 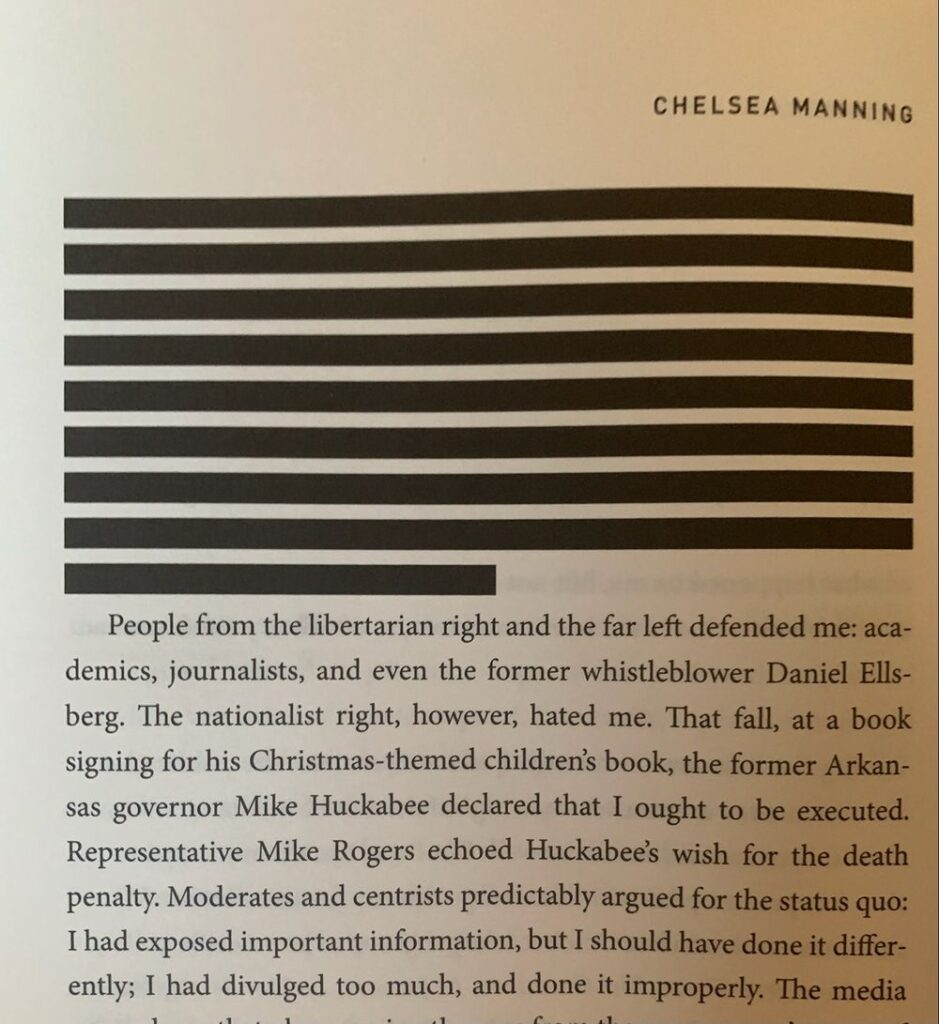 The US government refused to allow Manning to write about anything related to documents, which captured moments in a war and occupation that was a massive crime perpetrated against the people of Iraq.

In the section on the US embassy cables, Manning describes how the files offered a “stunning look behind the curtain and showed just how frankly our officials talked in private about other countries and the way the United States threw its weight around on the international stage.”

“Journalists immediately started using the cables to fact-check, to get a deeper understanding of the powerful institutions they covered, and to uncover new truths,” Manning adds.

Yet as far as examples go, readers, who can easily access the cables and news stories that mention them, were deprived of further details because the US government censored much of this page during their publication review. 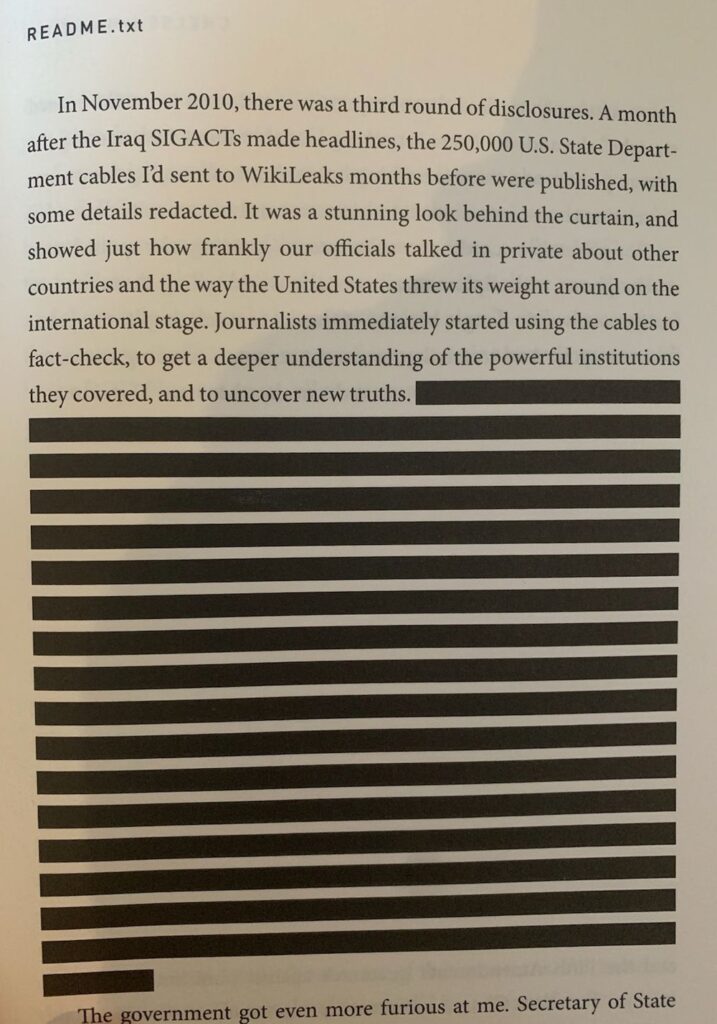 Weaponizing The Classification System Against Manning

Can Manning really tell her story if she cannot speak about details in the documents, especially those which had a positive impact on our world?

This is all part of the US military weaponizing the classification system against Manning, which is what she contends Major Ashden Fein consistently did when he was the lead military prosecutor in her court-martial.

“[Fein] requested that the most limited amount of information possible be released publicly—with huge redactions in even that. My right to a fair public trial was annihilated because of the very structure of my court-martial,” Manning argues. “Actually, it was effectively two courts-martial: there were the hearings that the world saw, and then there were the classified hearings, which were completely sealed.”

The classified hearings not only presented a “fuller picture of what had led up to my decision,” but according to Manning, “just about everything that seemed broadly favorable to me appeared only in the classified evidence. Twenty-four of the witnesses the prosecution called gave their testimony, at least in part, under those conditions of secrecy.”

I covered Chelsea Manning’s trial extensively, and this is true. In fact, I don’t know if I can really say I covered Manning’s entire case cause I was not in the courtroom for classified hearings.

“In other words, the very thing that helped me decide that leaking was worth it—the arbitrary, self-dealing, and occasionally manipulative use of the classification system—[was] weaponized against me,” Manning declares.

As Manning puts it, “The control this gave the government verged on Kafkaesque. For example, the cables that I had leaked, which anyone in the world could call up via a simple Google search, remained classified.”

A Security Regime That Pretends To Be Blind and Deaf

This absurd secrecy was on display back in December 2011 when the American Civil Liberties Union (ACLU) requested twenty-three diplomatic cables, and the State Department responded with eleven censored cables. Officials also refused to release twelve cables and revealed a “roadmap” for classification decisions.

“The information released by the State Department is perhaps more sensitive than the cables themselves, revealing what the government thinks the public should and should not be able to see,” Anna Estevao and Nathan Freed Wessler wrote for the ACLU. “The government redacted significant portions of the eleven cables it released to us. But because WikiLeaks has already published the full text of each cable, we know what’s underneath those redactions.”

The State Department “claimed the authority to conceal information that is embarrassing to or critical of the government, like criticism of the CIA’s black-site prison program and treatment of Guantanamo detainees, while releasing information that paints the US in a positive light. The government also redacted multiple passages containing information that has long been publicly available, such as the fact that Italian prosecutors alleged that a US military jet traversed Swiss airspace on the day the CIA kidnapped cleric Abu Omar from Milan.”

Referring to the twelve cables that the State Department withheld as the “dirty dozen,” Estevao and Wessler highlighted their contents.

…What is it they don’t want the public to see? Allegations that a former detainee sustained an injury during interrogation at Guantánamo, mention of the tension created between the US and the British and Irish governments over those countries’ disapproval of the US government’s extralegal rendition flights, an account of the Yemeni government’s role in facilitating US airstrikes in Yemen, an explanation of why torture at Abu Ghraib made the United States less secure, and a description of pressure brought by the US government on Germany to prevent Germany from holding the US accountable for kidnapping, torturing, and secretly detaining German citizen Khaled El-Masri. All of these cables describe issues of widespread public concern, so what’s the point of withholding them, but not the others?

Like Estevao and Wessler asserted, the information could not do more “harm” to “national security” if released because the information was already public. Any “damage” was done when leaked.

But the State Department hid “behind a security regime that pretends to be blind and deaf, maintaining that if they say something is secret, people don’t actually know it. This twisted logic defies reason and serves the government’s desire to only be held accountable for information and actions they choose to admit.”

That security regime, which pretends to be blind and deaf, is the same one that benefits from a US court system that protects its authority to censor former US intelligence and military employees like Chelsea Manning.

President Barack Obama may have commuted Manning’s sentence, but she will never truly be free.

As is the case for all military or national security whistleblowers prosecuted under the Espionage Act, the US government may forever instill fear that FBI agents could come to her home and take her off to jail if she dares to speak about the “classified information”—information we all are within our rights to read and share.

This is also information which US officials are prosecuting WikiLeaks founder Julian Assange for publishing in an unprecedented attack on journalism.

This is the second article on Chelsea Manning’s new book.
Read the First Part here.