After decades [centuries?] of abuse by the U.S., some Latin American countries seem to find Beijing’s approach attractive. 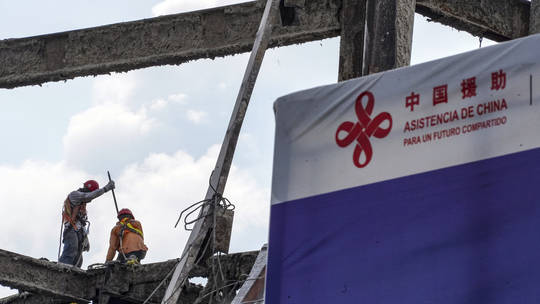 10 Nov 2022 – As a Forbes article, published on Monday [7 Nov], sets out, China’s “list of Latin American inroads is long and striking” and “Washington has yet to manage much of a response.” It goes on to note that in the 21 years that have passed since China joined the World Trade Organization (WTO), “Chinese trade with Latin America has increased at a striking 31% annual rate on average to the equivalent of about $450 billion a year.”

China is now “South America’s largest trading partner and is second only to the United States for trade with all Latin America.” It has “signed free trade agreements with three countries, Chile, Costa Rica, and Peru and began negotiations with Ecuador last February.”

This is all happening in a region where, as the article describes it, the US “has exercised all but untrammeled hegemony.” For nearly 200 years, in fact, the United States has made unparalleled dominance of the Americas one of its core security and foreign policy objectives, under what is known as the Monroe Doctrine. To do so, it has launched an endless string of wars, coups, and other forms of political interference.

But that isn’t stopping the countries of the region from tilting towards China. American dominance has not equated to prosperity or stability for practically any Latin America country. In fact, it has often meant poverty, inequality, and chaos. While Beijing has no specific plans to ‘politically dominate’ Latin America, the growing ties between the two regions of the world are a product of the South American continent being shafted by brutal neoliberalism for decades – the same reason that is driving a tidal wave of leftist governments into power in country after country. Brazil’s new president Lula is but the latest example, and he takes over a country facing a deep economic decline. There is no doubt he will be enhancing his partnership with China as a part of BRICS.

To Latin American countries, the United States is not a guardian or a benevolent overseer but an abusive partner who does not care about their respective interests. The US’s bid to hold power in the Western hemisphere (which American officials have a habit of calling “our” hemisphere) comes with a belief that to suit the US, its neigbours should stay poor, divided, and weak. Can one imagine, for example, Brazil being allowed to rise and become a wealthy state that can challenge US economic and military power? South America has also been a ‘guinea pig’ for US-led economic exploitation and the forced imposition of free market radicalism, particularly in the 1980s with the IMF. This is, of course, advantageous to American companies, whose dominance and capital prevent local economies from truly developing or competing. The lack of life prospects subsequently creates a ‘brain drain’ of talent immigrating to the US itself.

China’s foreign policy, however, is different. While the United States has largely focused on ‘opening’ up the markets of other countries to dominate them, Beijing depicts itself as providing a mutual pathway to development by lending expertise from its own model and what it describes as “win-win” cooperation. To do so, China offers market access to its enormous consumer base of 1.4 billion people, while offering loans and expertise from state companies to rapidly assemble infrastructure, such as in energy and transport, without political conditions. These are benefits that the United States and its allies, due to ideological and structural differences, simply cannot compete in providing.

China’s investment does not come completely without political strings attached. Beijing refuses to deal with governments that recognize Taiwan as independent, and over the past 20 years, many Latin American countries have withdrawn such recognition. These nations have apparently found doing so less consequential than the more direct and disruptive influence of their much nearer northern neighbour – or have shown a basic grasp of national sovereignty and non-interference, an understanding they have not seen from Washington.

As the Forbes article goes on to note: “Apart from direct loans to governments, most Chinese investment has concentrated on energy development, petroleum refining, and power generation. Presently, Power China has 50 ongoing projects across 15 Latin American countries.” Since the US placed China as its number one geopolitical rival, it has long sought to provide an “alternative” to the Belt and Road initiative, vowing to invest billions in infrastructure across developing countries. Argentina was the latest Latin American country to join Belt and Road, having done so at the beginning of this year. One of the key projects the two countries will work together on is a nuclear power plant.

The alternatives offered by the US and other G7 countries have largely been rhetorical, over-reliant on the good will of the private sector, and marketed under a never-ending cycle of changing names and rhetorical soundbites, from the “blue dot network” to “Build Back Better” to the “Partnership for Global Infrastructure and Investment.” Few of them ever seem to stick, whereas Belt and Road is a comprehensive and clearly detailed vision with consistency in what it wants to achieve. China can market its advantages, while the US has no other cause, motivation, or vision other than to simply oppose what China is doing. Therefore, it has never made a compelling case for Latin American countries to cease partnering with Beijing.

Given the above, if the US is serious about competing with China in Latin America it should try less political interference and more investment. Two centuries of US interventions and regime changes have not made a prosperous or satisfied continent, but have left a myriad of stagnant economies that have never surpassed what is known as the ‘middle-income trap’ due to political-economic systems that entrench the status quo, or in the case of Cuba and Venezuela, are constantly crushed by sanctions. Beijing offers a strong and consistent alternative, one which comes with market access, infrastructure investment, and a plan for the future. That’s hard to argue against.

Timur Fomenko is a political analyst.