‘So Irresponsible’: US Condemned for Warning Australia against Joining Anti-Nuclear Treaty

Australia “should not face intimidation from so-called allies under the auspices of defense cooperation,” said one advocate.

Members of the Sydney Anti-AUKUS Coalition participate in a protest in Sydney, Australia on December 11, 2021. The coalition opposes military agreements between Australia, the United Kingdom and the United States, the development of nuclear submarines, and war on China.
(Photo: Steven Saphore/Anadolu Agency via Getty Images)

9 Nov 2022 – Anti-nuclear weapons campaigners rebuked the Biden administration on Wednesday over its opposition to Australia’s newly announced voting position on the Treaty on the Prohibition of Nuclear Weapons, which could signal the country’s willingness to sign on to the agreement.

“The TPNW offers the best chance for lasting global peace and security and a clear road map for nuclear disarmament.”

As The Guardian reported, the U.S. Embassy in Canberra warned Australian officials that the Labour government’s decision to adopt an “abstain” position regarding the treaty—after five years of opposing it—would obstruct Australia’s reliance on American nuclear forces in case of a nuclear attack on the country. 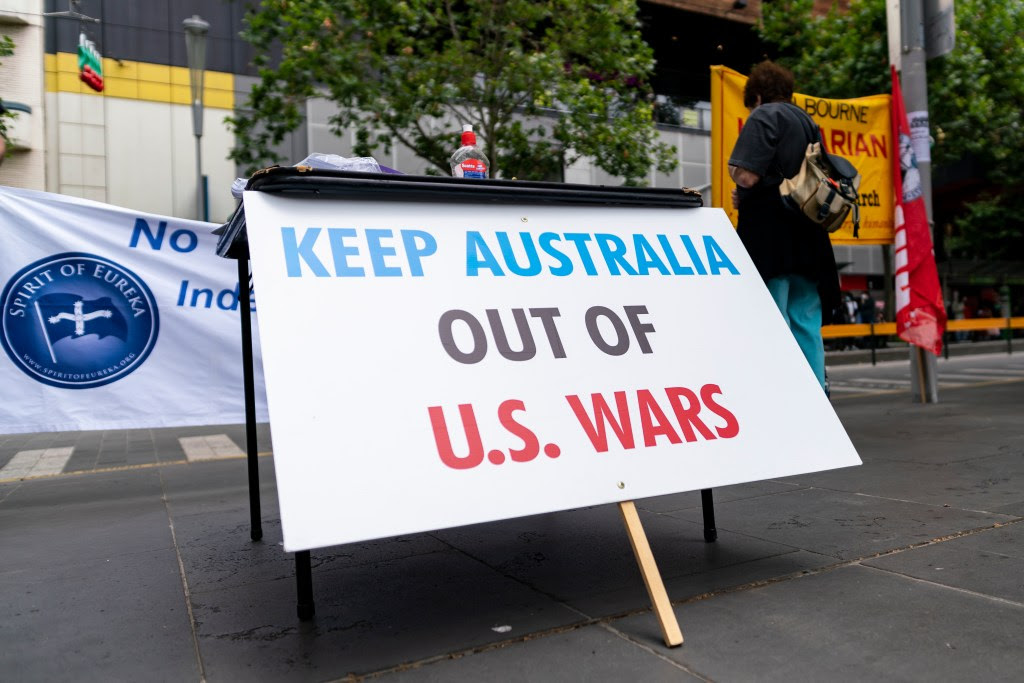 No AUKUS, No Nuclear Submarines, No War.
By Matt Hrkac via Flickr

Australia’s ratification of the nuclear ban treaty, which currently has 91 signatories, “would not allow for U.S. extended deterrence relationships, which are still necessary for international peace and security,” the embassy said.

The U.S. also claimed that if Prime Minister Anthony Albanese’s government ratifies the treaty it would reinforce “divisions” around the world.

Australia “should not face intimidation from so-called allies under the auspices of defense cooperation,” said Kate Hudson, general secretary of the Campaign for Nuclear Disarmament. “The TPNW offers the best chance for lasting global peace and security and a clear road map for nuclear disarmament.”

Australia should be rightly commended for dropping opposition to the #TPNW – and for understanding that nuclear weapons don’t make the world any safer. It should not face intimidation from so-called allies under the auspices of defence cooperation!https://t.co/88wrwuU90r

The TPNW prohibits the development, testing, stockpiling, use, and threats regarding the use of nuclear weapons.

The Australian chapter of the International Campaign to Abolish Nuclear Weapons (ICAN) noted that Albanese’s vocal support for achieving nuclear disarmament puts him in line with the majority of his constituents—while the U.S., as one of nine nuclear powers in the world, represents a small global minority.

According to an Ipsos poll taken in March, 76% of Australians support the country signing and ratifying the treaty, while only 6% are opposed.

The majority of the Australian people support our country joining the #TPNW #nuclearban. Our govt should act accordingly. https://t.co/rVGWyRpqjO

Albanese has won praise from campaigners for his own anti-nuclear advocacy, with the prime minister recently telling The Australian that Russian President Vladimir Putin’s nuclear saber-rattling “has reminded the world that the existence of nuclear weapons is a threat to global security and the norms we had come to take for granted.”

“Nuclear weapons are the most destructive, inhumane, and indiscriminate weapons ever created,” Albanese said in 2018 as he introduced a motion to commit the Labour Party to supporting the TPNW. “Today we have an opportunity to take a step towards their elimination.”

Labour’s 2021 platform included a commitment to signing and ratifying the treaty “after taking account” of factors including the development of “an effective verification and enforcement architecture.”

Australia’s decision to change its voting position comes as the U.S. is planning to deploy nuclear-capable B-52 bombers to the country, where the weapons will be positioned close enough to strike China.

Gem Romuld, Australia director of ICAN, said in a statement that “it’s no surprise the U.S. doesn’t want Australia to join the ban treaty but it will have to respect our right to take a humanitarian stance against these weapons.”

“The majority of nations recognize that ‘nuclear deterrence’ is a dangerous theory that only perpetuates the nuclear threat and legitimizes the forever existence of nuclear weapons, an unacceptable prospect,” Romuld added.

At a time when Russia is threaten its use nuclear weapons, North Korea is testing nuclear missiles & the Iran deal is in pieces, I find it so irresponsible for the US to discourage states from delegitimizing and prohibiting weapons of mass destruction. https://t.co/frNjiJ9aBG

“Using nuclear weapons is unacceptable, for Russia, for North Korea, and for the U.S., U.K., and all other states in the world,” said Fihn. “There are no ‘responsible’ nuclear armed states. These are weapons of mass destruction and Australia should sign the TPNW!”

Julia Conley is a staff writer for Common Dreams.