On December 11, 2022, the New York Times broke a front-page story about “J.R.O.T.C,” the Junior Reserve Officers Training Corps, described as “a program funded by the U.S. military designed to teach leadership skills, discipline, and civil values – and to open students’ eyes to the idea of a military career.”  The well-researched Times article has the air of a dramatic expose, although the facts it presents have been known for years.

This Pentagon program, now enrolling more than half a million “cadets” in some 3,500 high schools across the United States, was founded during World War I and has greatly expanded since the 1970s.  It is no coincidence that this expansion took place simultaneously with the development of the “all-volunteer” armed forces introduced by President Richard Nixon at the end of the Vietnam War.  The use of conscription to raise forces for that war not only generated a massive antiwar movement among youth at risk of being drafted, it also produced a dissension-ridden, unreliable U.S. Army.  By 1973, ending the draft seemed to American rulers little more than common sense.  But how, then, to ensure that young people willing to risk their lives in imperial adventures would volunteer in numbers sufficient to maintain the largest, most far-flung military establishment in human history? 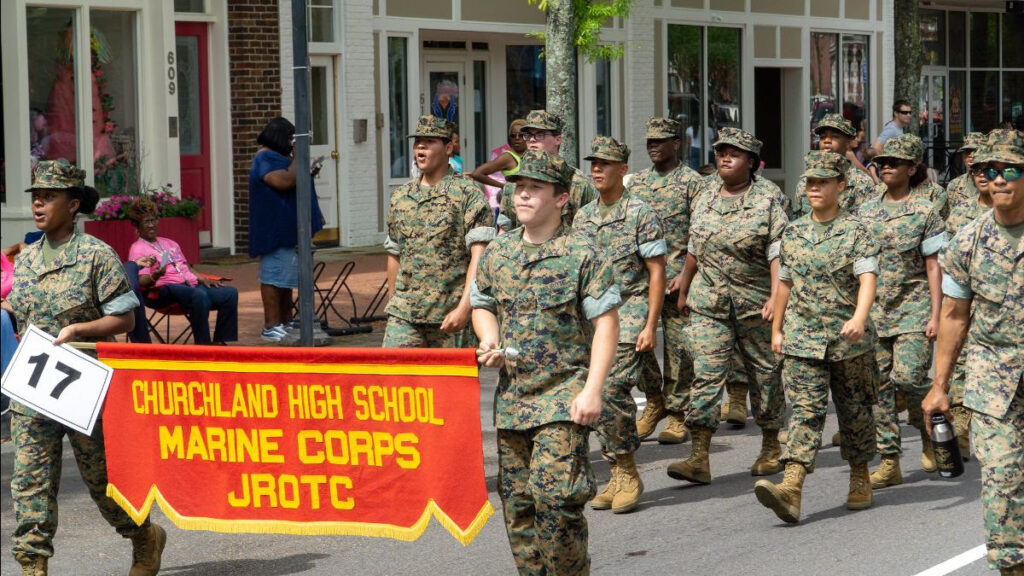 The answer (in addition to raising pay rates and opening military recruitment doors to women) was to establish an enormous training and recruitment program in high schools, particularly those located in impoverished urban communities inhabited in large part by people of color, as well as in more rural areas in which military service was a tradition.  According to the U.S. Army spokespeople, the Army now draws 44% of all new recruits from schools offering J.R.O.T.C. training.  The U.S. Navy, Air Force, and Coast Guard also rely on their teenaged cadets to supply substantial numbers of recruits.  The major point emphasized by the Times reporters is that these programs, each featuring a battery of courses, are supposed to be “electives” which students are free to take or reject, but are very often mandatory in fact, if not in law.  (E.g., students in a great many schools are automatically enrolled in them and must struggle to be de-enrolled).  Thus, the Times headline declares, “At Many Public Schools, Military Training Is Not an Elective.”

The headline is eye-catching, but mandatory vs. voluntary is not the crucial question.  The key issue is whether U.S. public schools ought to be used to convince students to undertake military careers by inculcating the “military virtues” and by taking advantage of their impoverished circumstances. 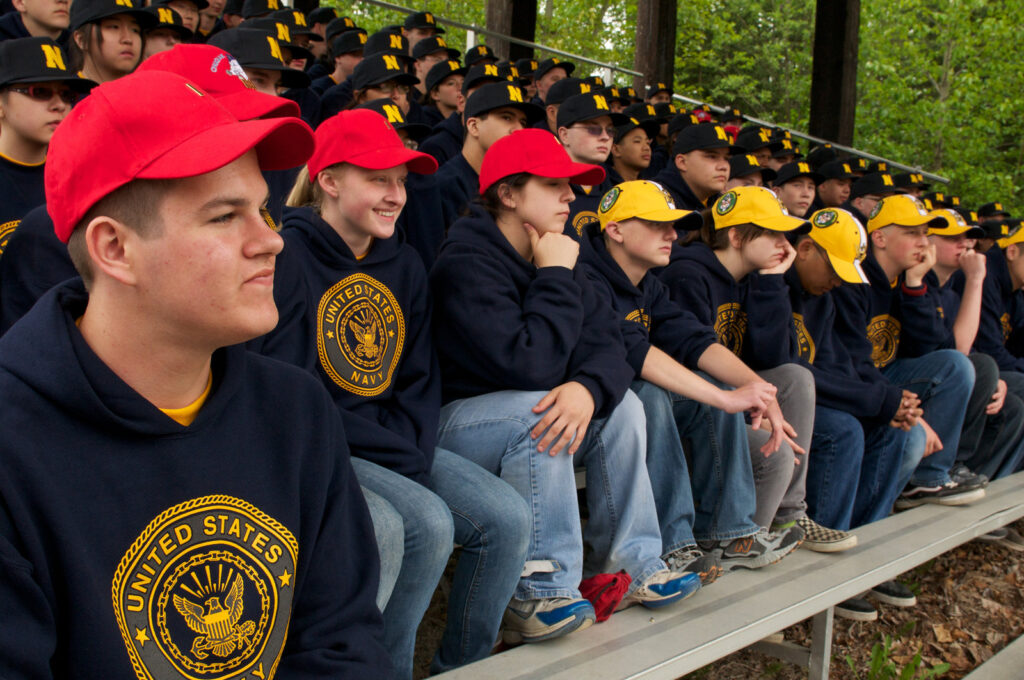 These two factors are closely related.  Advocates of the J.R.O.T.C. programs insist that what they are teaching is not aggressiveness or methods of violent coercion, but self-discipline, respect for authority, leadership, and collaborative teamwork.  These virtues are often considered to be in short supply in ghettoized communities plagued by deep poverty, disrupted families, and a high level of street violence.  Thus, defenders of the programs point out that many parents in poverty-ridden communities approve of them, since they provide sorts of useful training that neither the parents themselves nor the local schools in their civilian capacity seem capable of providing.

One can hardly blame parents for feeling this way.  As a parent myself, I would rather have my child indoctrinated and absorbed by the U.S. Army or Navy than by some local street gang or prison-bound group of troublemakers.  But the idea that this either/or constitutes a reasonable or legitimate choice seems nothing less than obscene.

In effect, we hear the Pentagon, which is in urgent need of new recruits, telling students and their parents, “We know that your community is ravaged by poverty and violence. We understand that your schools don’t teach useful or marketable skills, and that you’re unlikely to obtain a job after graduation that pays more than a poverty-level wage.  But these are the facts of life; we can’t do anything about them.  We are here to help you develop good habits and succeed in the world, so long as you take orders from us now and consider seriously – VERY seriously – making a U.S. military service your permanent home.” 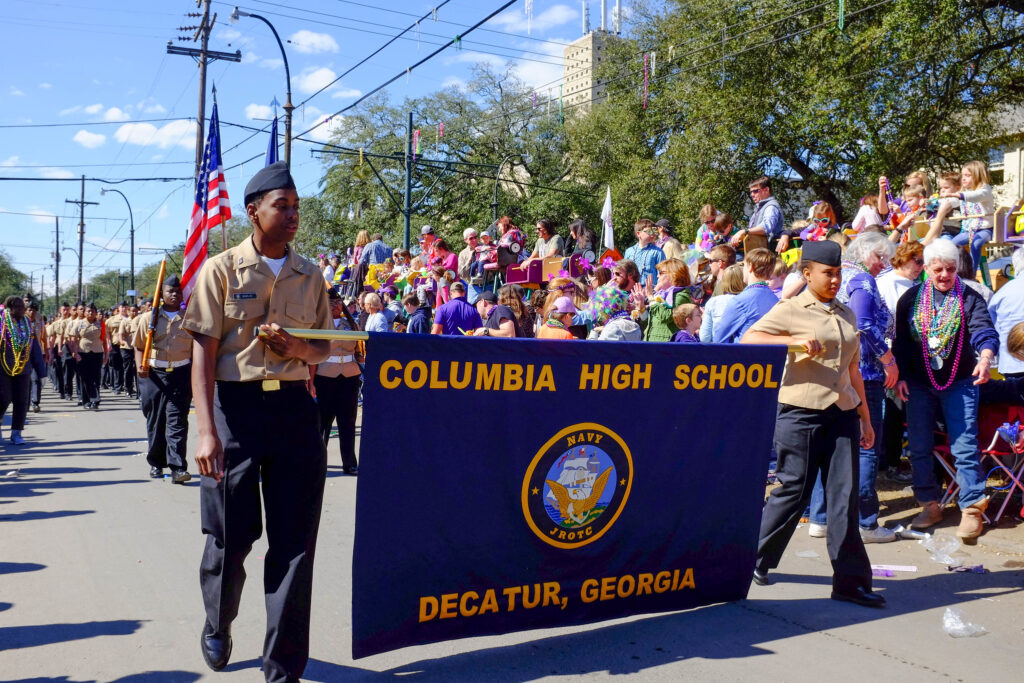 Consider how this “deal” works.  First, the socioeconomic and political systems that the U.S. Armed Forces are organized to protect generate endemic poverty, shattered families, incompetent schools, rural decay, and environmental destruction as part of their normal operations.  Then the U.S. Armed Forces appear in the guise of rescuers promising to save students from these ills by teaching them to be on time, obey authority, take pride in their work, control their impulses, and work with each other in teams.

Could these skills not be taught by the schools themselves or by other civilian organizations?  Perhaps, but only the armed services receive hundreds of millions of dollars of taxpayer funds each year to operate their youth-based programs.  Couldn’t the impoverished or decaying communities that house these schools be transformed by a federal development plan for deindustrialized or neglected regions?  Certainly – but this would almost certainly involve cutting a military budget that now consumes almost one trillion dollars of taxpayer money each year.  In any case, the whole point of programs like J.R.O.T.C. is not to transform the system of inequality, but to turn its destructive effects to the advantage of the military organizations and their civilian masters.

Inculcating respect for and obedience to these authorities, in fact, is a prime objective of J.R.O.T.C. training.  Each service has its own high school programs taught by retired veterans who may or may not have college degrees and teaching credentials, but who are professional advocates for militarism.  The knowledge that they communicate therefore includes tales from U.S. history designed to emphasize the noble and essential role played by the armed forces and to avoid criticism of America’s wars or warfighters.  All this is in line with the program objectives stated quite frankly by the U.S. Army:

The Pentagon insists that recruitment of students by the military services is not the primary aim of these programs, but the Code of Federal Regulations makes it clear that an essential part of their mission is to “create favorable attitudes and impressions toward the Services and toward careers in the Armed Forces.”

But of course!  Whether or not J.R.O.T.C. is elective or mandatory (or something in between), it is a war education, not a peace education program. During the 1960s and early 1970s efforts were made by antiwar students and parents to get all military training programs out of the public schools.  One can certainly make a case for this exclusion at present, but it is likely to fall flat unless effective problem-solving measures are also proposed.

Civilian training and education programs for students that can help combat the effects of communal poverty and decay are clearly needed.  Federal programs to rebuild communities and end their subjection to poverty and decay are long, long overdue.  Meanwhile, since these changes will take time, the advocates of peace education can at least demand that their voices be heard in the schools to confront the current hegemony of the war (i.e., “peace through military strength”) advocates.  Coherent and truthful alternatives to J.R.O.T.C. indoctrination are likely to be welcomed by many students and parents.  If peace education programs can be combined with civilian job training and public advocacy efforts, we might finally see a real challenge to the ongoing militarization of the schools.

Richard E. Rubenstein is a member of the TRANSCEND Network for Peace Development Environment and a professor of conflict resolution and public affairs at George Mason University’s Jimmy and Rosalyn Carter Center for Peace and Conflict Resolution. A graduate of Harvard College, Oxford University (Rhodes Scholar), and Harvard Law School, Rubenstein is the author of nine books on analyzing and resolving violent social conflicts. His most recent book is Resolving Structural Conflicts: How Violent Systems Can Be Transformed (Routledge, 2017).

Anticopyright: Editorials and articles originated on TMS may be freely reprinted, disseminated, translated and used as background material, provided an acknowledgement and link to the source, TMS: Inculcating the “Military Virtues”: The Pentagon’s Predatory Role in U.S. High Schools, is included. Thank you.