What the Rioters in Brazil Learned from North Americans

9 Jan 2023 – Jair Bolsonaro’s supporters showed that antidemocratic revolutions can be contagious too. 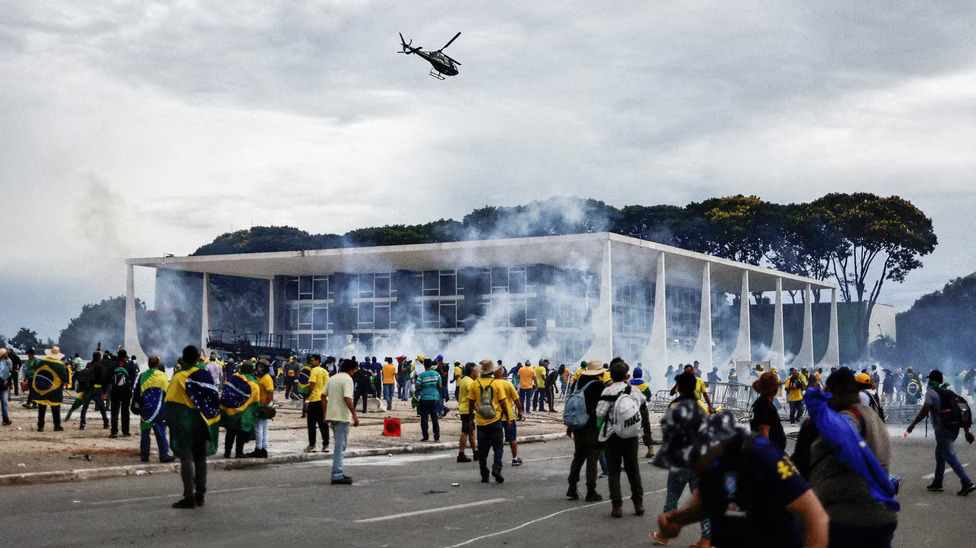 We memorize its opening sentences in school, throw quotes from it into speeches, and generally treat the American Declaration of Independence as a familiar source of reliable tropes. But when it was published in 1776, the declaration was a radical document, and its language inspired other radical documents. In 1789, French revolutionaries published the Declaration of the Rights of Man, declaring that “men are born and remain free and equal in rights.” In 1804, the leaders of the Haitian slave rebellion proclaimed the Haitian Declaration of Independence, vowing that “in the end we must live independent or die.”

The American Revolution also inspired scores of democratic and anti-colonial revolutionaries. Simón Bolívar, remembered as the Liberator in half a dozen South American countries, visited Washington, New York, Boston, and Charleston in 1807 and later recalled that “during my short visit to the United States, for the first time in my life, I saw rational liberty at first hand.” Visits to the U.S. inspired independence leaders from across Africa and Asia, and they still do. Would-be democrats from Myanmar and Venezuela to Zimbabwe and Cambodia reside in the United States, and study the institutions of the United States, even today. As I wrote on January 6, 2021,

By far the most important weapon that the United States of America has ever wielded—in defense of democracy, in defense of political liberty, in defense of universal rights, in defense of the rule of law—was the power of example. In the end, it wasn’t our words, our songs, our diplomacy, or even our money or our military power that mattered. It was rather the things we had achieved: the two and a half centuries of peaceful transitions of power, the slow but massive expansion of the franchise, and the long, seemingly solid traditions of civilized debate.

That tradition was broken, not just by the Trump administration but by the claque of men around Donald Trump who began dreaming of a different kind of North American influence. Not democratic, but autocratic. Not in favor of constitutions and the rule of law, but in support of insurrection and chaos. Not through declarations of independence but through social-media trolling campaigns. Many of the actual achievements of this claque have been negligible or, more likely, exaggerated for the purposes of fundraising. Steve Bannon once implied he had influence in Spain, for example, but actual members of the Spanish far right laughed at that idea when I asked them about it in 2019. Bannon’s attempt to set up some kind of alternative, far-right university in Italy ended in failure. At their conferences, on their social-media platforms, and on their countless YouTube channels, the leaders of what one might call the Autocracy International often seek to present themselves as the enemies of communism—even as most of the actual people who really do fight communism, whether in China or Cuba, keep their distance.

In Brazil, the Autocracy International has finally had a “success.” Although public institutions in the country’s capital have been attacked before, most recently in 2013, today’s events in Brasília contained some new elements. Notably, some of the protesters who today sacked the Brazilian Congress, presidential palace, and supreme court; beat up police officers; and broke security barriers were holding up signs in English, as if to speak to their fans and fellow flamethrowers in the U.S. The phrases #BrazilianSpring and #BrazilWasStolen have been spreading on Brazilian social media, again in English, as if some North American public-relations company were pushing them. There are clear links, some via radical Catholic organizations, among far-right groups in Latin America, Europe, and the United States. Not long ago, members of some of those movements, including ex-President Jair Bolsonaro’s son Eduardo, met at a special edition of the Conservative Political Action Conference in Mexico City.

Still, I suspect that the real influence of the U.S. experience in Brazil comes not from the preening likes of Bannon, the former Trump adviser Jason Miller, or any of the minor figures who have excitedly, and perhaps lucratively, been promoting #StoptheSteal in Brazil, but—as in the 18th century—through the power of example. Note the pattern here: After he lost November’s election, Bolsonaro refused to attend the inauguration of his successor. Instead, he went (of all places) to Florida. He and his followers have been pursuing fictional claims in lawsuits in the Brazilian courts. They then chose January 8, almost exactly two years after the assault on the North American capital, to stage their attack—a strange date in some ways, because the sitting president of Brazil, Luiz Inácio Lula da Silva, has already been inaugurated, and the chaotic assault on Congress will not block him from exercising power. Today’s riot makes more sense if the point was to create a visual echo of what happened in Washington.

But the power of example works in other ways too. If US citizens want to help Brazil defend its democracy and avoid sinking into chaos, and if we want to avoid #StoptheSteal movements proliferating in other democracies, then the path forward is clear. We need to prove conclusively both that these movements will fail—after all, the U.S. version already did—and that their instigators, from the very top to the very bottom, pay a high price for that failure. The January 6 committee has just made a clear recommendation to the Justice Department, asking for a criminal case to be brought against Trump. The events in Brasília today should remind us that the department’s response to this demand will shape politics not only in the United States, but around the world.

We should also get ready to help the Brazilian government in its quest for justice. We should help it pursue financial ties, political relationships, or other connections between North American and Brazilian insurrectionists, including links between Trump and Bolsonaro, if they are significant. We should do so not just for Brazil’s sake but for ours. Democratic revolutions have long been contagious. Now we know that antidemocratic revolutions can be too.

Anne Applebaum is a staff writer at The Atlantic.