Letter from the Democratic People’s Republic of [North] Korea: Who Is the Real Aggressor? (Part 1)

Verdant hills laced with waterfalls; crashing surf on rocky coastline; every valley filled with rice paddies and vegetable plots; clean city full of high rise apartments interspersed with grandiose public buildings, monuments and parks; hard-working, proud, friendly people, unified in purpose. Hardly the embodiment of unpredictable aggression that comes to mind when reading mainstream US media coverage of North Korea, known by its citizens as Democratic Peoples’ Republic of Korea or DPRK. But these are the lasting images I took away from a 10 day tourist visit there earlier this month.

The DPRK population is fiercely resilient.   Forty years of brutal Japanese occupation of Korea in the first half of the last century were followed by popular liberation and independence in the North, but lingering US military presence and political influence in the South.  During the Korean War of 1950-53, the US relentlessly bombed the entire DPRK, killing over 3 million civilians, devastating whole cities and infrastructure.   As a result, DPRK’s military developed a two-pronged and unequivocal mission: firstly, to defend the nation’s sovereignty from outside aggressors at all costs—yes they will fight back if you mess with them!–and secondly, to channel abundant energy via soldiers’ labor into productive peaceful efforts: re-construction, public works, disaster relief and harvesting crops. 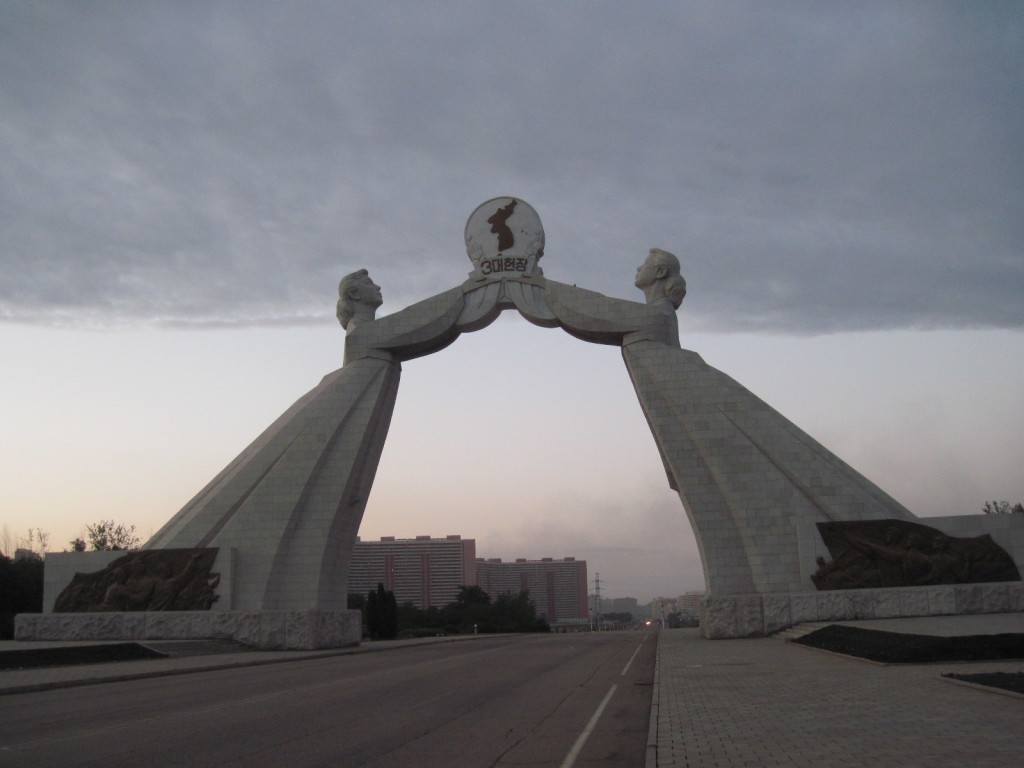 Socialist values of unity and solidarity are evident in both the city and countryside. Though DPRK is not rich, resources are stretched to meet everyone’s basic needs as much as possible. The economic crisis and famine of the late 1990’s, called the Arduous March, posed the greatest challenge to this aspiration. People in DPRK receive free public education from kindergarten through trade school or university (with an emphasis on musical training at early ages), free health care (following modern medical practices to the extent available supplemented by traditional Korean remedies), free housing and basic foodstuffs. There is full employment and pensions for the disabled and elderly. A variety of civic amenities are available at little or no cost, including public transportation (Pyongyang’s subway is adorned with extensive mosaic murals), health spas and public baths, parks, arts and culture offerings and massive sports complexes. Away from the city, well-maintained trails and picnic areas in the mountains and on the coastline as well as numerous restored historic sites offer Sunday and holiday destinations for working families.

As an advocate for bicycle and pedestrian activities in my home town in California, it was gratifying to see so many people in DPRK getting around by walking and cycling, in both cities and countryside. Even more striking was what I did not see in contrast to US realities. Very few cars or other motor vehicles.   No profusion of superfluous consumer goods and no garish advertising urging us to buy, buy, buy! While some differences in living standards were apparent, I saw neither forsaken homeless people begging on the streets nor evidence of billionaires flaunting opulent personal wealth.

The Tower of the Juche Idea is Pyongyang’s hallmark monument. Introduced by DPRK’s founding leader Kim Il Sung, Juche is a driving force, and much of the theory behind it—independence, self-determination, people defining their own destiny through the will of the popular masses—is familiar to me from other liberation struggles I’ve studied in Haiti, El Salvador, and Cuba. It was intriguing to learn that there are institutes and organizations devoted to the study of the Juche idea in many countries throughout the world. A question remains, however: Since the inner workings of the DPRK government are inscrutable to me, how does the will of the popular masses from the bottom up make itself known to decision-makers, following the Juche principle?

Naysayers might view DPRK leadership as a succession of autocratic despots imposing their will from top down, with the people little more than brainwashed automatons who reflexively worship their ubiquitous images. This cynical interpretation rings hollow to me, since the people I encountered displayed genuine intelligence, dignity and a cooperative attitude. Besides, the facts on the ground suggest a prioritization–coming from somewhere–of the collective well-being of the population.

Another approach would be to consider the mindset of people in their current context. Given their past experience with outside aggression from Japan and the US, and the substantial US military presence in South Korea (known to its citizens as Republic of Korea or ROK) over the last 65 years–including numerous US bases, 30,000 – 75,000 troops since the Korean War armistice, dozens of US nuclear weapons deployed in ROK during the Cold War–is it surprising the population of DPRK feels continually under siege and is loyal to strong leaders who encourage them in their determination to protect their borders? Imagine, if southern states in the US had hostile foreign military bases with foreign nuclear weapons deployed there pointing north, I suspect people in northern states might band together and speak with one voice.

Allegations in US media about inhumane prison camps were not touched on at all during my tour of DPRK, but before criticizing this lapse, may he who is without sin cast the first stone. There are widely documented abuses in the US criminal justice system, with rampant police shootings of unarmed people, huge detention centers for undocumented immigrants and frequent mistreatment of prison inmates. What we are told in the US about DPRK prisons needs to be evaluated judiciously, coming mostly from ambiguous satellite images (reminiscent of Colin Powell’s bogus WMD claims in Iraq in February 2003) and occasional defector testimony which may well involve persuasion to exaggerate, given how eager the US is to portray DPRK as “the bad guy.”

Why does the US persist in demonizing DPRK (former President Bush placed North Korea on the “Axis of Evil”) and singling it out for enemy status when the US has such a long track record of propping up and supporting dictatorships with terrible human rights records all over the world? Perhaps it is to justify and expand US military presence in ROK, Okinawa and Japan, while cautiously watching China flex its economic and military muscle. Or are ruling US capitalists so intent on controlling ever more resources that they cannot leave even tiny little countries like DPRK and Cuba alone to pursue their socialist programs?

North Koreans, proud of the cultural heritage, artistic legacies and common language they share with fellow Koreans in the south, long for reunification of the peninsula. DPRK proposals for reunification are based on three principles: Independence (negotiated by Koreans without foreign interference), Federation (limited powers of central government with both north and south retaining autonomy in many areas), and Peaceful Means (mutual commitment to resolving issues nonviolently).

Numerous attempts at constructive engagement between DPRK and ROK have occurred in recent decades, with a few positive outcomes, like the establishment of a special economic zone we drove through just north of the DMZ where the DPRK-ROK joint venture “Peace Car” is manufactured. Failed attempts at broader rapprochement between north and south have invariably led to a he-said, she-said situation: US media claims DPRK is to blame and DPRK claims belligerent US influence is to blame. Before pointing fingers, consider where each side is coming from: on the one hand a small, poor, besieged country defending its sovereignty, and on the other the world’s richest nation and greatest military power with over 7,000 nuclear weapons and hundreds of bases throughout the globe. Who is the real aggressor?

I appreciate the warm hospitality extended to me and fellow tourists visiting DPRK and didn’t mind restrictions placed on us (“always stay with the guided group, don’t walk off on your own, get permission for taking photos”), since I felt we as guests were obliged to respect the rules and norms of our hosts–unlike European colonizers who rarely did so when interacting with indigenous people in the Western Hemisphere over the last 500 years. I told my Korean guides that I join others in the US who advocate for a shift in my country’s policies from strong-arm dominance to cooperation with a little humility. Peace researcher Johan Galtung often states, “I love the US republic, but hate the US empire”, which reflects my experience in DPRK. People from the US or anywhere else are whole-heartedly welcome to come without guns, but US imperialists, please go home!

Anticopyright: Editorials and articles originated on TMS may be freely reprinted, disseminated, translated and used as background material, provided an acknowledgement and link to the source, TMS: Letter from the Democratic People’s Republic of [North] Korea: Who Is the Real Aggressor? (Part 1), is included. Thank you.

2 Responses to “Letter from the Democratic People’s Republic of [North] Korea: Who Is the Real Aggressor? (Part 1)”