28 Sep 2015 – Last week TMS published my first account of a recent visit to North Korea (known by its citizens as Democratic People’s Republic of Korea or DPRK), with general impressions and global context, highlighting the US role in tensions in that region. This week I will try to put a more personal and human face to this country, which received us so graciously.

Since the media of my home country, the US, routinely paints a rather frightening picture of North Korea (the US State Department “strongly recommends against all travel by US citizens to there”), I promised our local guides that I would go home and tell everyone about the wonderful people I met there. People-to-people engagement throughout the world is a powerful peacemaking tool, and there was certainly much common humanity that we shared in DPRK.

My primary points of contact were our group’s Korean tour guides, a woman (who was in charge) and a man, both fluent in English, congenial and open to our many questions. Along with additional guides at specific sites, they generously shared their knowledge, bridging cultural gaps with good humor, insight and sensitivity.

I managed to master only two expressions in Korean while there, hello and thank you, but these were appreciated and helped break the ice. Leaving restaurants, I would thank the hostesses for the good food, “kamsahamnida!” which usually drew a surprised, pleased look on their faces. Walking from the site of the secret camp of anti-Japanese guerilla fighters near Mt. Paektu, a group of giggly, uniformed school children followed us, and when I greeted them with “annyonghassimnigah”, at first they didn’t understand. Our guide urged me to repeat the greeting and on the third try their faces lit up and they laughed with recognition. Encouraged by our guide to greet back in our language, a gleeful chorus of “hello” rang out from the more attentive ones.

Spontaneous friendly gestures from local people spiced up our daily activities. Towards the end of our waterfall hike near Mt. Myohyang on a Sunday, as we greeted a group of local women just starting the hike, one of them smiled and danced towards us, swinging a woman from our tour group in a circle before letting go and continuing on her way.   While trailing a northeast coastal path near Chongjin, two from our group approached an extended local family huddled in a jovial circle barbecuing meat and mushrooms on the beach. Members of the family playfully thrust chopsticks into our hands and offered us a taste (the mushrooms were delicious!).

Other interactions were more scripted but enjoyable nonetheless. On the national holiday (September 9) mass dancing is the custom, and we got to experience it in Chongjjn’s main square, where thousands of young people—men in shirts and slacks and women in brightly colored and decorated traditional Korean dresses—sashayed in circles to the music, while pre-arranged volunteers invited us to join them, taking us as dance partners and showing us the steps with gusto. 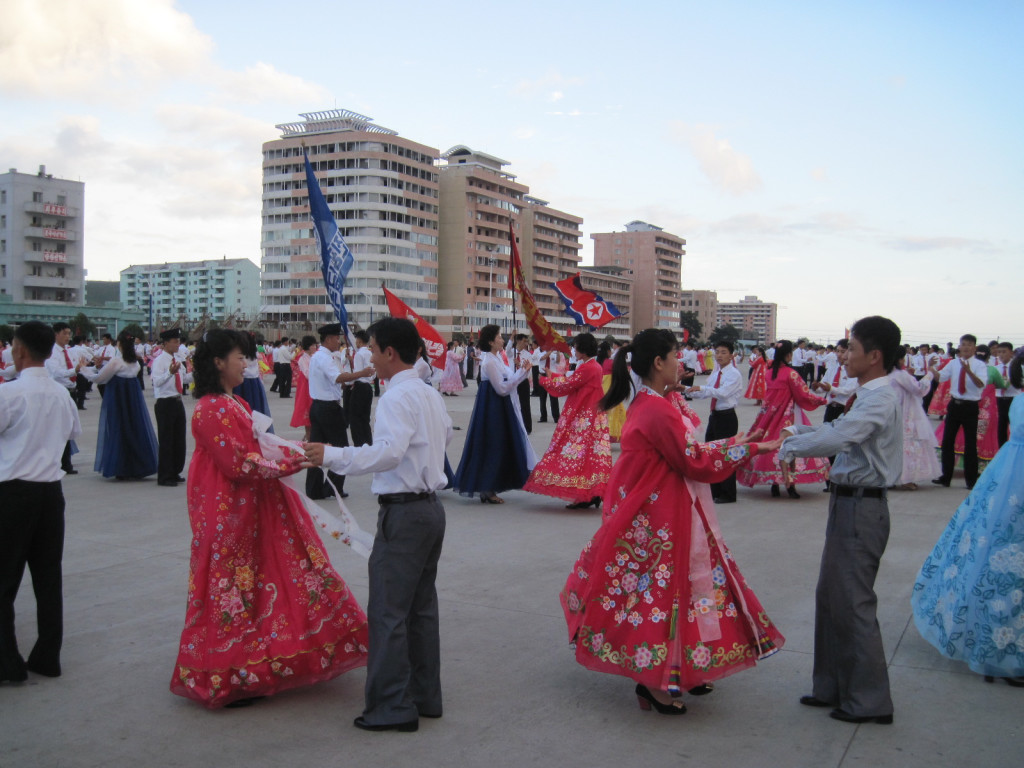 Mass dancing in Chongjin on the national holiday.

On another day we visited an English language class being held in the “Grand People’s Study House” (a.k.a. main library) in Pyongyang; the shy student sitting next to me perked up when prompted and asked haltingly where I was from and what I thought of his country.

Once, after visiting a particularly beautiful scenic spot, our male Korean guide took me by surprise saying hesitantly and with a questioning look, “That was dope, wasn’t it?”, practicing some US slang he had picked up. He was also open to discussing more serious topics with me, such as the Juche concept of people defining their own destiny. When I told him I personally oppose US policies of imperial aggression, he asked if there were any well-known US leaders who felt similarly, and I told him about Martin Luther King, Jr, whom he hadn’t heard of and was very interested in learning about.

The most moving moment for me occurred outside the Korean War museum (known in NK as the Fatherland Liberation War), where I was able to shake hands and pose for a photo with a retired army officer who had helped intercept the US spy ship USS Pueblo off the coast of DPRK in 1968. I tried to convey to him with my eyes and attitude an apology for my country’s relentless bombing of his in the year of my birth (1950), and we both shared an unspoken intention of building a more peaceful future. 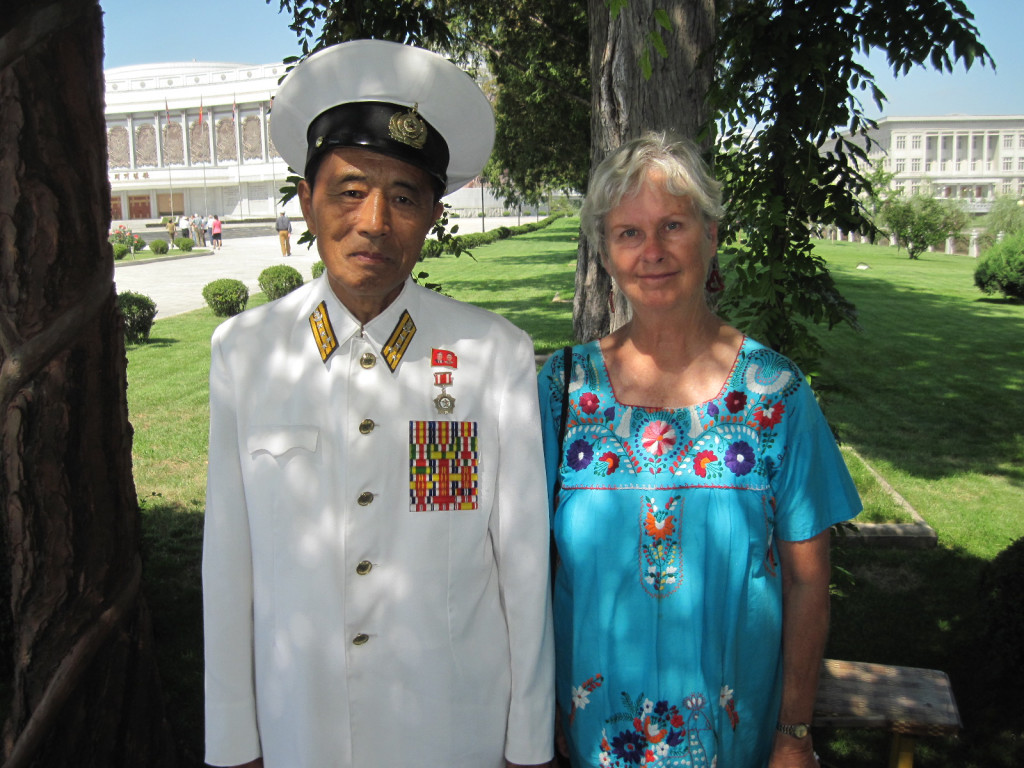 Retired officer who helped intercept US spy ship in 1968, with the author.

Eagerly soaking up the scene around us wherever we went, I collected many glimpses of daily life that helped to further demystify North Korea and its people for me.

Having persevered through the “Arduous March” period of extreme food shortages in the 1990’s brought on by catastrophic flooding and abrupt end to Soviet fuel subsidies, access to food appears to be highly valued and not taken for granted even today. Every house we passed in country villages had a cabbage patch in front and squash vines growing up the walls. We were told the basic diet includes rice, kim-chi (spicy fermented cabbage), bean paste soup, and whatever else is available. Being vegan, I can only rave about the deliciously seasoned and freshly prepared vegetable dishes we were served, though meat and fish were also common. Highly processed foods and sugary sweets were notably absent.

One local guide on the northeast coast told us,

“DPRK is not a rich country, it’s a poor country, but the government still provides everyone with free housing, education and health care, because it’s valued and needed.”

Every city we visited appeared to have abundant housing in the form of tall apartment buildings, often with potted plants on the balconies and the surroundings always neatly swept, as it is the residents’ responsibility to keep the area around their building clean and litter-free. We were told most apartments have floor heating in winter, but no running hot water. Our female guide said it’s no problem using cold water in summer, and in winter there are public baths and saunas in each neighborhood. While our hotel in Pyongyang had all the comforts one might want, our lodgings for two nights in the far north were more rustic, without running water, so I relished the chance to have a hot shower in such a public facility while there.

Personal car ownership appears to be extremely rare in North Korea—we were told that exceptionally talented artists, scientists and athletes are given cars by the government—so people rely on public transportation and their own steam. Buses and big open trucks take groups of all ages on Sunday outings and visits to relatives in other parts of the country. Pyongyang also has a few electric streetcars and two elegant subway lines. I marveled at the beautiful chandeliers and decorative mosaics on the subway platforms, as we rode from “Prosperity” station via “Glory” station to “Triumphant” station, at one point packed inside a train with a crush of teenagers on their way home from school.

Many people, especially during rush hour, are out walking and riding bicycles, sometimes ferrying a child or large bundles on the rear rack. To prove that not all North Koreans blindly follow the rules, I snapped a photo of a man riding his bicycle the wrong way on a one-way bike lane. An avid cyclist myself, I watched longingly each time we drove past the well-used bicycle trail along the scenic banks of the Taedong River in Pyongyang (no time in our full schedule for us to try it out). And when we headed out of town in our tour bus, the broad, nearly empty, flower-lined highway stretched out before us like another great big bike path! 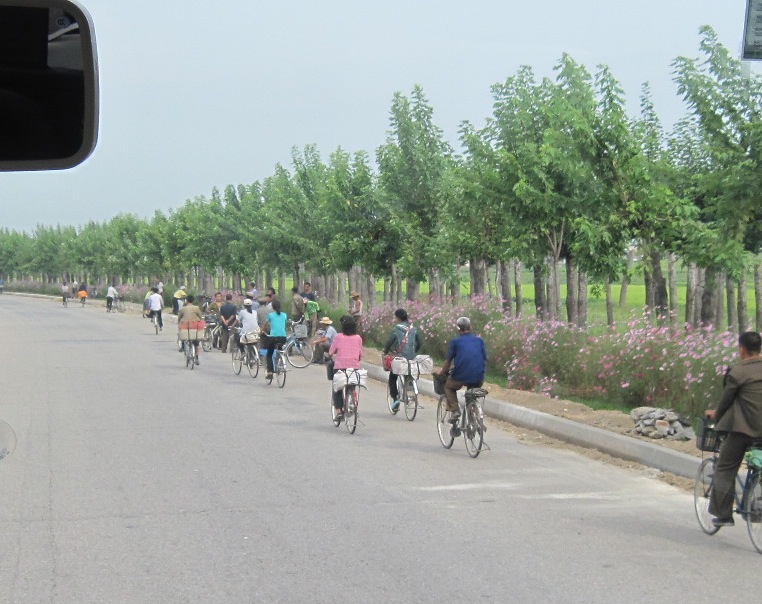 Highway leading out of Pyongyang towards the airport.

One measure of a society is how it treats its children. A highlight of our trip was a visit to one of many “children’s palaces”, or after school centers, in Pyongyang. A precocious 10-year old girl gave us a tour of the elegant, sprawling facility where young people were engaged in a variety of classes, including calligraphy, embroidery, singing, accordion, traditional Korean instruments, violin, and Tae Kwan Do, a martial art. At a kindergarten in Chongjin, we observed a class where some of the children eagerly answered the teacher’s questions, others held back, and all applauded supportively those who did answer. In both the kindergarten and the children’s palace, we were treated to magnificent, highly polished performances of music and dance.

I saw kids being kids and having fun in more informal settings too, splashing and swimming in rivers in the countryside and at the seacoast, playing volleyball at a Pyongyang park, playing in a band on the street in front of their high school, playing soccer at a summer camp. We were told most families have no more than 2-3 children, and those children are clearly cherished.

Korea has a deep and rich heritage of Buddhist and Confucian traditions that we encountered at numerous well-preserved historic sites. The most breathtaking sacred site for me was the summit of Paektu-san, Korea’s highest mountain far in the north, a volcano whose gigantic crater is filled with a deep turquoise lake ringed by a steep perimeter of jagged rocky ridges. According to ancient folklore, this site is the origin of the Korean people.

No matter what our origins or cultures, ultimately we are all sisters and brothers in the human family, equally deserving of respect and support. Like people everywhere, those I encountered in DPRK displayed genuine intelligence, dignity and a cooperative attitude. I am grateful our paths crossed.

Anticopyright: Editorials and articles originated on TMS may be freely reprinted, disseminated, translated and used as background material, provided an acknowledgement and link to the source, TMS: Snapshots from the Democratic People’s Republic of [North] Korea (Part 2), is included. Thank you.