Debate around reparations is threatening because it upends the usual narrative of development. The impact of colonialism cannot be ignored. 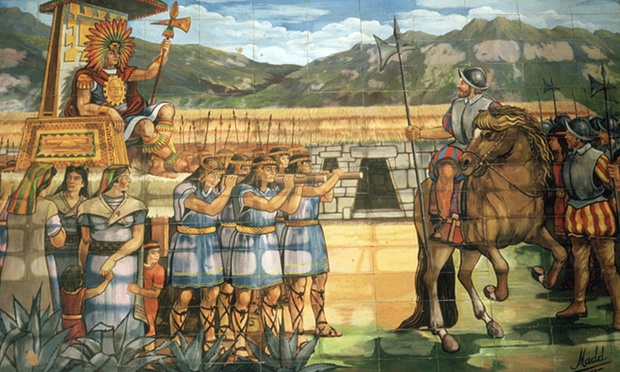 A mosaic in Cajamarca shows an encounter in 1532 between the conquistador Pizarro and the Inca Atahuallpa. Photograph: Mireille Vautier/Alamy

27 Nov 2015 – Colonialism is one of those things you’re not supposed to discuss in polite company – at least not north of the Mediterranean. Most people feel uncomfortable about it, and would rather pretend it didn’t happen.

In fact, that appears to be the official position. In the mainstream narrative of international development peddled by institutions from the World Bank to the UK’s Department of International Development, the history of colonialism is routinely erased. According to the official story, developing countries are poor because of their own internal problems, while western countries are rich because they worked hard, and upheld the right values and policies. And because the west happens to be further ahead, its countries generously reach out across the chasm to give “aid” to the rest – just a little something to help them along.

If colonialism is ever acknowledged, it’s to say that it was not a crime, but rather a benefit to the colonised – a leg up the development ladder.

But the historical record tells a very different story, and that opens up difficult questions about another topic that Europeans prefer to avoid: reparations. No matter how much they try, however, this topic resurfaces over and over again. Recently, after a debate at the Oxford Union, Indian MP Shashi Tharoor’s powerful case for reparations went viral, attracting more than 3 million views on YouTube. Clearly the issue is hitting a nerve.

The reparations debate is threatening because it completely upends the usual narrative of development. It suggests that poverty in the global south is not a natural phenomenon, but has been actively created. And it casts western countries in the role not of benefactors, but of plunderers.

When it comes to the colonial legacy, some of the facts are almost too shocking to comprehend. When Europeans arrived in what is now Latin America in 1492, the region may have been inhabited by between 50 million and 100 million indigenous people. By the mid 1600s, their population was slashed to about 3.5 million. The vast majority succumbed to foreign disease and many were slaughtered, died of slavery or starved to death after being kicked off their land. It was like the holocaust seven times over.

What were the Europeans after? Silver was a big part of it. Between 1503 and 1660, 16m kilograms of silver were shipped to Europe, amounting to three times the total European reserves of the metal. By the early 1800s, a total of 100m kg of silver had been drained from the veins of Latin America and pumped into the European economy, providing much of the capital for the industrial revolution. To get a sense for the scale of this wealth, consider this thought experiment: if 100m kg of silver was invested in 1800 at 5% interest – the historical average – it would amount to £110trn ($165trn) today. An unimaginable sum.

Europeans slaked their need for labour in the colonies – in the mines and on the plantations – not only by enslaving indigenous Americans but also by shipping slaves across the Atlantic from Africa. Up to 15 million of them. In the North American colonies alone, Europeans extracted an estimated 222,505,049 hours of forced labour from African slaves between 1619 and 1865. Valued at the US minimum wage, with a modest rate of interest, that’s worth $97trn – more than the entire global GDP. 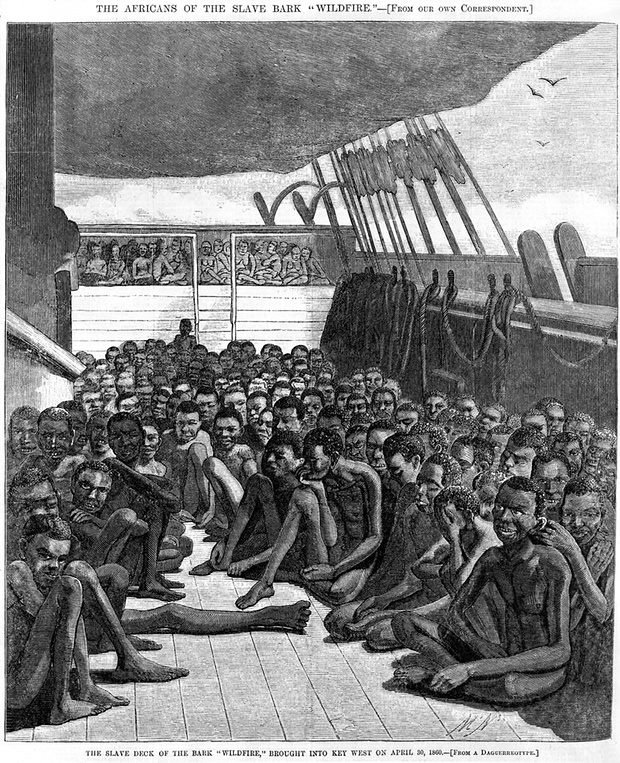 A newspaper illustration of a slave ship transporting 510 captives from Africa to the Caribbean. The Caribbean nations are currently suing for reparations. Photograph: Alamy

Right now, 14 Caribbean nations are in the process of suing Britain for slavery reparations. They point out that when Britain abolished slavery in 1834 it compensated not the slaves but rather the owners of slaves, to the tune of £20m, the equivalent of £200bn today. Perhaps they will demand reparations equivalent to this figure, but it is conservative: it reflects only the price of the slaves, and tells us nothing of the total value they produced during their lifetimes, nor of the trauma they endured, nor of the hundreds of thousands of slaves who worked and died during the centuries before 1834.

These numbers tell only a small part of the story, but they do help us imagine the scale of the value that flowed from the Americas and Africa into European coffers after 1492.

Then there is India. When the British seized control of India, they completely reorganised the agricultural system, destroying traditional subsistence practices to make way for cash crops for export to Europe. As a result of British interventions, up to 29 million Indians died of famine during the last few decades of the 19th century in what historian Mike Davis calls the “late Victorian holocaust”. Laid head to foot, their corpses would stretch the length of England 85 times over. And this happened while India was exporting an unprecedented amount of food, up to 10m tonnes per year.

British colonisers also set out to transform India into a captive market for British goods. To do that, they had to destroy India’s impressive indigenous industries. Before the British arrived, India commanded 27% of the world economy, according to economist Angus Maddison. By the time they left, India’s share had been cut to just 3%. The same thing happened to China. After the Opium Wars, when Britain invaded China and forced open its borders to British goods on unequal terms, China’s share of the world economy dwindled from 35% to an all-time low of 7%.

Meanwhile, Europeans increased their share of global GDP from 20% to 60% during the colonial period. Europe didn’t develop the colonies. The colonies developed Europe.

And we haven’t even begun to touch the scramble for Africa. In the Congo, to cite just one brief example, as historian Adam Hochschild recounts in his haunting book King Leopold’s Ghost, Belgium’s lust for ivory and rubber killed some 10 million Congolese – roughly half the country’s population. The wealth gleaned from that plunder was siphoned back to Belgium to fund beautiful stately architecture and impressive public works, including arches and parks and railway stations – all the markers of development that adorn Brussels today, the bejewelled headquarters of the European Union.

We could go on. It is tempting to see this as just a list of crimes, but it is much more than that. These snippets hint at the contours of a world economic system that was designed over hundreds of years to enrich a small portion of humanity at the expense of the vast majority.

This history makes the narrative of international development seem a bit absurd, and even outright false. Frankie Boyle got it right: “Even our charity is essentially patronising. Give a man a fish and he can eat for a day. Give him a fishing rod and he can feed himself. Alternatively, don’t poison the fishing waters, abduct his great-grandparents into slavery, then turn up 400 years later on your gap year talking a lot of shite about fish.”

We can’t put a price on the suffering wrought by colonialism. And there is not enough money in the world to compensate for the damage it inflicted. We can, however, stop talking about charity, and instead acknowledge the debt that the west owes to the rest of the world. Even more importantly, we can work to quash the colonial instinct whenever it rears its ugly head, as it is doing right now in the form of land grabs, illicit financial extraction, and unfair trade deals.

Shashi Tharoor argued for a reparations payment of only £1 – a token acknowledgement of historical fact. That might not do much to assuage the continued suffering of those whose countries have been ravaged by the colonial encounter. But at least it would set the story straight, and put us on a path towards rebalancing the global economy.

Jason Hickel is an anthropologist at the London School of Economics.