The Two Terrorisms and the Nonviolent Alternatives 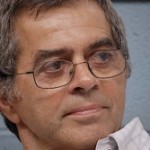 And Eye for an Eye, and the Whole World Goes Blind (M.K.Gandhi)

20 Nov 2015 – There are two terrorisms [raging about]: the one from above, by the states, called war, and the one from beneath, by the insurgents, the rebels, the people taking the brunt of the former terrorism. Which one comes first: the egg or the hen? They both need each other, they feed each other in a surging spiral, as can be seen every day in so many areas of the world, notably in the [Middle>>] Near East, but elsewhere as well. Phrases like “Skock and Awe” and “terror balance” were not thought up by Jihadists, but are the wicked fruit of big powers’strategic thinking.

And what about the victims? They are civilians, mainly; yet let’s not neglect the soldiers, undergoing the warfare stress, fear, death.

And what about the puppeteers? They are cozily sitting back, in parliaments, in the boards of arms corporations and their funding banks, in the military research facilities, think tanks and war schools, in the secret services, in the Pentagon, in the academic and scientific communities offering their services to the cause of war, and so on. All of them do not wage war themselves, they plan it and get it waged by war labourers.

After every slaughter, like last November 13 one in Paris, opinion makers and politicians alike are often heard yell: “where are the pacifists?”. Odd enough, this time around it hasn’t been the case yet. Maybe they had a quiver of shame: what they ought to wonder was rather: “where is NATO?”. Well, it was playing a naval wargame with some 35,000 troops in the Mediterranean, in a mock-up of next war to come, not against ISIS, but against Russia, and in the backdrop against China too. And where were the intelligence agents – so unintelligent – pretending to know nothing beforehand and yet everything afterwards?

That’s the “big chessboard” of the “Great Game” for the control of Eurasia, as per Brezinski’s elucubrations, whereby the pawns are armies. And victims – civilians – do not show up, as being seen as sheer “side damages”; nor do the puppeteers, acting well in the hide.

At first it was Al Qaeda with Bin Laden, now it is ISIS with the Khalif. Both are the result of the geopolitical experiments carried out in the world lab by those great neocon and Pentagon strategists.

By now it is widely known that ISIS is an offspring of the policy that the USA have been carrying out in the Near East for at least the past quarter century. Along with that, we should not forget about Israel, which has turned Palestine and notably Gaza into a lab for testing whatever sort of social control technology meant to strike terror into the hearts of its population.

While pictures of black-clad ISIS men wielding a knife in one hand and an AK47 in the other one command fear, just the same is roused by robocops, soldiers and policemen turned into killer-robots.

Media indulge into plenty of details depicting the violences inflicted on our fellow citizens, but take great care not to report what happens almost every day with the onslaughts by armed drones, killing thousands of civilians, in their quest of retribution of the terror perpetrators. The casualty ratio between those caused by our own armies and those by the jihadist groups may be 1000:1 or at best 100:1. And that is just referring to direct violence, whereas we pretend to oversee the dramatically bigger figures stemming from structural violence.

Thereby not the one predicted by Samuel Huntington, but the clash between the culture of violence, terror, barbarity and war, and the culture of love, mutual solidarity, happiness and nonviolence.

It is up to us to choose which side to stay on and which futurd we want to build for our children, grandchildren, and the whole humankind.

The alternatives of nonviolence

Nonviolence is by now well-known not to mean a passive attitude, but it needs at all time to be confirmed and shown as being action and political planning for the building of a fair harmonic society by nonviolently transforming and resolving conflicts – micro through macro – without resorting to political violence.

Quite a stretch has been covered that way, dismayed as we may feel when facing tragic and utterly violent events. But we need to widen our view both history- and spacewise so as to spot the already existing alternatives as well as the future ones. We have a moral obligation to show evidence that all who died under the violence exerted by both terrorisms “have not died in vain!” For this commitment to be made concrete, we may reasonably identify two main sets of proposals by which to tackle the crises currently rending the humankind: non-military steps to be shortly taken, and mid/long-term nonviolent steps.

Here are a few common-sense, reasonable proposals, largely agreed upon by different subjects, including institutional ones, not necessarily sharing a nonviolent view.

Short-term non-military steps as above can be started straight away, if consensus between local and international political institutions is created. But the whole humankind is nowadays sitting in a deep transformation phase, which has to be steered toward establishing a genuine nonviolent culture, if we are not to perish under the ominous threats of the impending global systemic slump (economic-financial, nutritional, ecological-climatic environmental, social-existential-ethical-cultural). Therefore, concrete mid- and long-term projects need to be tended and worked out. The following are some such suggestions, an outcome of peace research studies started way back.

All these actions can be carried out and enhanced from below – as happened other times previously – by grassroots movements active for peace, the environment, social justice. Nowadays such movements, though active, are hardly visible, and the Paris attacks seem to have been planned on purpose to prevent them from playing a foreground role in the social change. The attacks have occurred right prior to the major CoP 21 meeting about the climate change and have already helped shift the conference off-focus.

Further widening and improving may well apply to all above steps too. Accomplishing them takes “longer than the lifetime” of one single actor, no matter how clever, creative, fond, like the great previous masters – as Gandhi, Martin Luther King jr, Danilo Dolci, Aldo Capitini, Buddha, Jesus.That is a collective task of the whole humankind; it is possible, rightful, exciting, to put an end to violence in history and trigger an evolutionary jolt in human nature.

Prof. Nanni Salio is a member of the TRANSCEND Network for Peace, Development and Environment and Director of the Centro Studi Sereno Regis in Torino, Italy.

Anticopyright: Editorials and articles originated on TMS may be freely reprinted, disseminated, translated and used as background material, provided an acknowledgement and link to the source, TMS: The Two Terrorisms and the Nonviolent Alternatives, is included. Thank you.