DPRK: Isolated, Demonized, and Dehumanized by the West

18 Mar 2016 – Soon, most likely, there will be new brutal sanctions imposed against North Korea. And there will be massive provocative military exercises held, involving the US and South Korea (ROK). In brief, it is all ‘business as usual’: the West continues to torture DPRK; it is provoking it, isolating, demonizing and dehumanizing it, making sure that it wouldn’t function normally, let alone thrive. 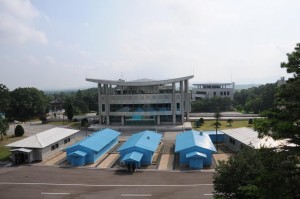 Border at Panmunjom from DPRK side

The submissive Western public keeps obediently swallowing all the shameless lies it is being served by its mainstream media. It is not really surprising; people of Europe and North America already stopped questioning official dogmas a long time ago. 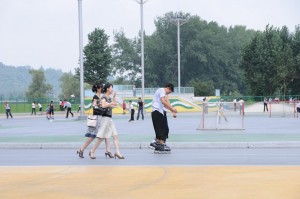 One of hundreds free public spaces in DPRK

North Korea (DPRK) is depicted as some insane, starving, subnormal and underdeveloped hermit state, whose leaders are constantly boozing and whoring, murdering each other, and building some primitive but lethal nukes, in order to destroy the world. 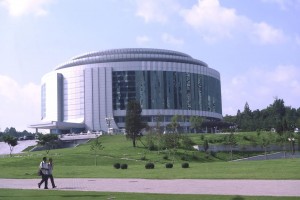 One of many Pyongyang theatres

Those of us who are familiar with DPRK know that all this is one bundle of fat, shameless lies. Pyongyang is an elegant, well functioning city with great public housing, excellent public transportation, public places and recreational facilities, theatres, sport facilities and green areas. And despite those monstrous sanctions, the countryside is much more prosperous than what one sees in the desperate Western ‘client’ states like Indonesia and Philippines. 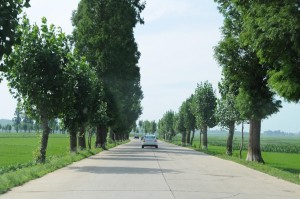 At least there is something; there have at least been a few decent reports that have been written about those grotesque lies and the Western propaganda.

But the essential question remains: ‘Why is the West so obsessed with demonizing North Korea?’

And the answer is simple: Like Cuba, North Korea dared to step on the toes of Western colonialism and imperialism. Sacrificing its sons and daughters, it helped to liberate many African countries, and it provided assistance to the most progressive forces on the most plundered and devastated continent.

This is one thing that the West never forgives. It lives off the unbridled plunder of all continents; it essentially thrives by looting its colonies. Those countries that assisted the liberation struggles, those nations that fought for freedom of the colonized world – Soviet Union/Russia, China, Cuba and the DPRK – were designated by Western ideologues as the most ‘dangerous’ and ‘evil’ places on Earth. 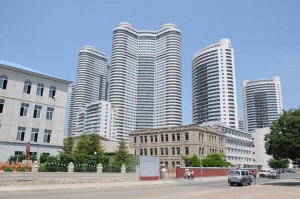 DPRK free public housing … is this what the west hates about DPRK?

In Europe and North America, conditioned masses (they have been actually profiting from the colonialism and neo-colonialism for decades and centuries), are stubbornly refusing to comprehend this main reason why the Empire has made the people of North Korea suffer so terribly for years and decades.

My comrade, Mwandawiro Mghanga, Chairperson of SDP and also a Member of the Executive Committee of Africa Left Networking Forum (ALNEF) based in Dakar Senegal, wrote for this essay:

The Social Democratic Party of Kenya (SDP) condemns the unjustified sanctions against North Korea (DPRK) instigated by imperialism led by the United States of America. We are aware that imperialism has never stopped its cold and hot war against DPRK that through one of the greatest patriotic, heroic and revolutionary anti-colonial and anti-imperialist national liberation armed struggles succeeded in winning true independence in the northern half of Korea. When it invaded North Korea, US imperialism like Japanese colonialism earlier, suffered one of the most humiliating military defeats it will never forget in its reactionary history. We also know that the US and the West hates DPRK with venom for refusing to be a puppet of imperialism like South Korea. A dirty false propaganda war is waged against DPRK for refusing the capitalist and neo-colonial path of slavery, under-development and exploitation of person by person and instead choosing the path of development for freedom and humanity, socialism.

We in Africa will not accept to be cheated by imperialists who have always been part and parcel of our problems. Imperialism is not and has never been a friend of Africa but its enemy. African patriots and revolutionaries will never allow imperialism to tell us who our friends are. For we know whom our friends are! And North Korea has always been Africa’s true friend. When the whole of the African continent was under Western colonialism, Korea under the revolutionary leadership of comrade Kim Il Sung was fighting Japanese colonialism and showing solidarity with Africa at the same time. After DPRK, in the name of socialist internationalism increased its moral, military and other material support to African countries in their struggle for liberation from colonialism, imperialism and apartheid. Immediately after independence from colonialism in the 1960s, thousands of Africans, including Kenyans, received free higher, technical and specialised education in the DPRK. DPRK not only offered arms, finance and other material solidarity to Namibia, South Africa, Angola and Mozambique in the war against apartheid and imperialism, but it also actually sent internationalist revolutionaries to Africa to fight side by side with Africans for Africa. DPRK fought with Egypt and Africa during the 1967 war against the brutal Zionist regime of Israel supported by the Western countries. Today DPRK is together with African countries in the demand for a new just international order. In this DPRK is blamed by imperialism and imperialist puppet regimes for being in the forefront and showing by its own example that a new just international order cannot be but anti-capitalist, anti-imperialist, it must be socialist. 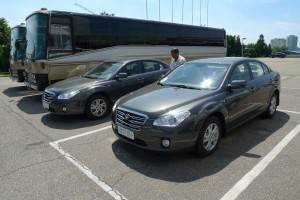 I spoke to people in Windhoek, who with tears in their eyes recalled North Korea’s struggle against (South African) apartheid-supported regimes in both Namibia and Angola. Naturally, South African apartheid used to enjoy the full support of the West. To repay that favor, South African troops joined the fight against North Korea and China during the Korean War. 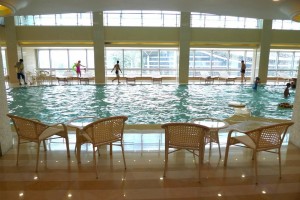 As mentioned by Mwandawiro Mghanga, North Korea fought against Israel, its pilots flew Egyptian fighter planes in the 1973 Arab-Israeli War. DPRK took part in the liberation struggle in Angola and it fought in Rhodesia (now Zimbabwe), Lesotho, and Namibia and in the Seychelles. It provided assistance to the African National Congress and its epic struggle to liberate South Africa from apartheid. In the past, it had aided the then progressive African nations, including Guinea, Ethiopia, Zimbabwe, Mali and Tanzania.

Arthur Tewungwa, Ugandan opposition politician from the Uganda People’s Congress Party (UPC) compares the involvement of the DPRK and the West in his country and the African Great Lakes region:

Uganda benefited from its relationship with North Korea in the 1980s when it helped the government to fight against the Museveni rebels who were supported by the US and UK. Morally, compared to the DPRK, the latter two have no leg to stand on with all the bloodshed they triggered in the Great Lakes Region.

Has North Korea been fully abandoned, left to its fate? Has it been ‘betrayed’?

Christopher Black, a prominent international lawyer based in Toronto, Canada:

…The fact that the US, as part of the SC is imposing sanctions on a country it is threatening is hypocritical and unjust. That the Russians and Chinese have joined the US in this, instead of calling for sanctions against the US for its threats against the DPRK and its new military exercises, which are a clear and present danger to the DPRK, is shameful. If the Russians and Chinese are sincere why don’t they insist that the US draw down its forces there so the DPRK feels less threatened and take steps to guarantee the security of the DPRK?  They do not explain their actions but their actions make them collaborators with the USA against the DPRK.

The situation is bleak, but most likely not fatal; not fatal yet.

Jeff J. Brown, a leading China expert based in Beijing, does not hide his optimism when it comes to the Sino-Russian relationship with the DPRK:

There is not a lot that North Korea does in the international arena, that Baba Beijing does not have its hand in. They are two fraternal communist countries and 65 years ago, the Chinese spilled a lot of blood and treasure to save North Korea from the West. Mao Zedong’s son died on the Korean War battlefield, fighting against Yankee imperialism. There are two million ethnic Koreans living along the border with North Korea and another half a million Northerners living and working in China. Koreans are a recognized minority in China. No other country in the world understands North Korea like China does. This closeness is emblematic of their common border, the Yalu River, which is so shallow, you can wade across it. They also share boundaries with another key ally, Russia. China is North Korea’s very, very big brother and protector. Frankly, vis-à-vis the upcoming UNSC sanctions against North Korea, I think the West is getting played like a drum, and it is the drum that gets the crap pounded out of it.

Of course, both China and Russia have their long land borders with North Korea -roads and railroads inter-connecting all three countries. According to my sources in Moscow and Beijing, it is highly unlikely that the two closest allies of the DPRK would ever go along with the new sanctions, whether they are officially ‘supporting them’, or not.

But the logic used by Christopher Black is absolutely correct: it is the West that should be suffering from the toughest sanctions imaginable, not DPRK.

It is the West, not North Korea, which has murdered one billion human beings, throughout history. It is the West that colonized, plundered, raped and enslaved people in all corners of the planet. What moral mandate does it have to propose and impose sanctions against anyone?

We are living in a twisted, truly perverse world, where mass murderers act as judges, and actually get away with it.

North Korea spilled blood for the liberation of Africa. It showed true solidarity with robbed, tortured people, with those whom Franz Fanon used to call the “Wretched of the Earth”. That is why, according to perverse logic (which has roots in the Western religious and cultural fundamentalism), it has to be punished, humiliated, and even possibly wipe off the face of the earth.

Not because it did something objectively ‘bad’, but because the objectivity lost its meaning. Terms ‘good’ and ‘bad’ are now determined by only one criterion: ‘good’ is all that serves the interests of the Western Empire, ‘bad’ is what challenges its global dictatorship.

If you save the village that had been designated by the Empire as a place to be raped and pillaged, you will be punished in the most sadistic and brutal manner. North Korea did exactly that. Except that it did not save just one village, but it helped to liberate an entire continent!

All photos by Andre Vltchek.

One Response to “DPRK: Isolated, Demonized, and Dehumanized by the West”