The Brexit Shock – Now All Is Up in the Air!

24 Jun 2016 – The UK, Europe and the rest of the world will be affected. But there has been no planning for this anywhere. It’s now all up in the air what this Brexit vote will be the starting point of. All we can safely predict is that we are in for interesting times!

Why did it happen?

Arrogant corporate and other elites continuously enriching themselves against all common social sense and ignoring the legitimate needs and concerns of ordinary citizens, women in particular – so, class and gender.

Interestingly, the whole art world supported Remain – and now fear for the effects of Brexit on Britain’s cultural development.

An EU that has failed to create a new, better way of doing politics, merely growing its original democratic deficit – so, lack of real democracy.

An EU that has had a woefully inadequate, cynical response to a refugee crisis caused by leading EU member states’ warfare – so, (mis)management and lack of leadership.

Significantly, the leading Muslim Association of Britain, MAB, supported Remain with the argument that ”Exit from the EU runs the risk of perpetuating rifts in British society, which would increase levels of hate crimes against British Muslims.” So, Islamophobia.

A general sense (but sometimes denial) of insecurity about the future all over the Western world, a deep sense of failure, loss, sense of risk of war in Europe and the fact that the rest of the world is moving ahead and will surpass the West; a sense that of the West lead by the the US getting relatively weaker and lacking leadership – so, psycho-political-civilisational insecurity.

A fall-back to ”me and my home” and closing the doors to the wider world world’s problems – nationalism, xenophobia, right-wing, neo-nazism populism and all the things many of us hoped had visited Europe for the last time – so, populism/nationalism/regression. 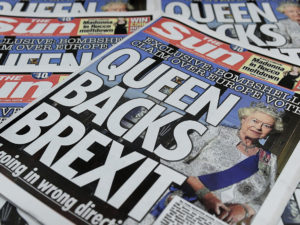 What could it lead to?

An exit domino effect in a number of countries – referendums and eventually a quite small EU or no EU.

A punishment by Germany and other EU of the UK for leaving, depending somewhat on whether the post-EU Britain will not only move out of the EU but also closer to the US.

It could also, in the best of cases, lead to a re-think throughout the EU and a real effort to do things differently – but unlikely given the EU is already in crisis and lack visionaries in politics.

A referendum in Scotland, further reducing the unitedness of the Kingdom.

A reshuffling in the global economy – London being so much of a global financial centre. Where will the banks and investors go now? What will China do that had London as it’s major hub?

A tumbling of the British £ and turmoil on the financial markets, weakening of the US$?

A Britain in deep economic crisis – or perhaps starting out on a new course with a great future, speeding ahead of the average EU?

A Britain that ties itself (even more) to the US in security political terms and an increasing conflict between those two and EU/NATO countries – spelling the dissolution of NATO.

What does it signify?

That democracy works – and that it doesn’t. The referendum instrument is an utterly democratic method – as Switzerland continues to prove to the world.

But then, is it wise that such an important decision can be made with such a small majority? Wouldn’t it have been reasonable to demand, say, 2/3 majority for Leave?

To ignore now what over 48% wanted isn’t good. But, anyhow, nobody trusts politicians nowadays and perhaps the effects will be smaller than most fear today.

That the – Western centre – doesn’t hold anymore. Such an important country leaving the EU is a blow beyond imagination to the entire idea of that Union.

Basically that the West is getting weaker and while trying to ’divide and rule’ it is fragmenting from inside.

The EU is getting weaker in spite of still being the largest economic bloc in human history. Because of the rise of other economies, the 28 countries accounted for 30% of the world’s total output in 1980 and 16,5% in 2015. With the UK leaving, the EU loses 15% of its GDP.

That the EU construction and Lisbon Treaty, written up by three old men, was wrong and outdated from the outset and lacked every potential to appeal to the diverse citizenry throughout Europe, particularly the younger ones.

That there is no vision and strategy; no one – no one! – seems to have the faintest idea about what will happen now – as Ken Livingstone, London’ former mayor, expressed it on Russia Today the morning after.

Be sure that Brexit on June 23, 2016 will be remembered as a turning point. And be sure that, while we do not know what will happen after Brexit, it’s not a message of good things to come for the already crumbling, vision-losing Western part of our world.

”May you live in interesting times” as the English say, considering it a curse. The Chinese – to whom this phrase is often falsely attributed – expresses it differently: ”Better to be a dog in peaceful time, than to be human in a chaotic (warring) time.”

2 Responses to “The Brexit Shock – Now All Is Up in the Air!”