Abdullah Issa (photo below right) was a Palestinian child living in Syria (family of refugees after the ethnic cleansing of 1948 by Israel). He was captured and accused of helping the Syrian government. He had injuries and was thought to be also treated for thallasemia. Pictures show the bandaged boy of perhaps 10 or 11 years old with a catheter in his arm. His captives had him in the back of a pick-up truck (perhaps having taken him from his hospital bed). As he pleaded with them they ignored him and directed their message to the camera against Syrian government then slit the throat of this child. The killer militia shouted Allahu Akbar as the boy was mercilessly murdered. This group is funded and/or supported by the governments of the US, Turkey, Israel, and Saudi Arabia. They were considered by those four governments as “moderate rebels”. 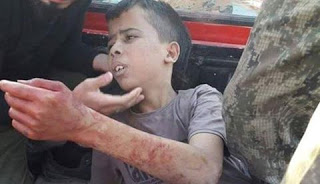 On the same day that Abdullah was beheaded, a Palestinian boy roughly the same age (Mohyee Sedki Tbakhi, photo below left) was shot by the Israeli occupation forces. I could not help note the similarity between the two as they looked like twins. As happens, only by intensifying our efforts are we able to cope with such tragedies. Coincidentally I accepted an invitation by the US Consulate in Jerusalem for Independence Day celebration (the event was held July 20th rather than July 4th here). Such trips to Jerusalem (without an Israeli permit) are always painful for me but the contradictions and conflicting emotions here were high. The area is in West Jerusalem long since transformed to a “Jewish city” the only real remnant of Palestinian next to the consulate is a cemetery (Mamilla or Maman Allah). But development is even eating away at that space and what is left of it is treated as a garden park. (photo: Me at the cemetery- a Palestinian visiting remaining Palestinians) 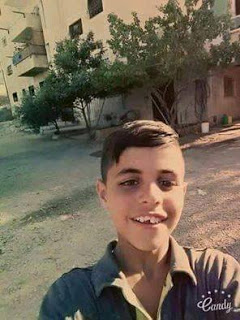 Perhaps two or three hundred people were at the consulate including many high level Palestinian officials and some Israeli officials (including many with blood on their hands). Many attendees were there for varied reasons. They dutifully listened to Consul General Blum give a good political speech highlighting need for peace and coexistence. Palestinian and Israeli beers were served (Dancing Camel beer!). Palestinian Knaffeh was served by Palestinians ut Shawerma sandwitches were served as “Israeli” food from the Waldorf Estoria! Equalizing occupier with occupied and colonize with colonized serves a clear agenda that has no space for liberation but encourages “coexistence” (status quo). But the consular staff are kind hearted and good intentioned. Many even told me privately they disagree with the policies but they are only doing what they were told to do.

Coincidentally this event was also held in parallel with the republican national convention, an event with much news coverage (for good or bad). I could not help but reflect on the state of the US in 2016 and to do so by taking time away from very important work I am doing (like analyzing the state of the Palestinian environment). Like analyzing any project, perhaps someone ought to sit down and do a proper and detail SWOT analysis (Strengths, Weaknesses, Opportunities, and Threats) to this human venture called the USA. Like all human organizational structures (including religions and political institutions everywhere), it starts with an idea that is then adapted to human needs at various intervals. 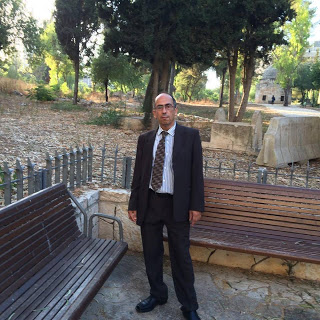 The original 13 European colonies in what became known as “America” shed their allegiance to Britain and with the help of France declared their independence in 1776. Despite a constitution that says “all men are created equal” voting in the new democracy was restricted to white male land owners a. Nearly a hundred years later, slavery was abandoned and much later women got the right to vote. Civil rights were allowed to blacks only in the 1960s. The US is now a nation of hundreds of millions (6%) of the world population but consuming nearly a quarter of the glob’s natural resources. It is a country of contradictions and has always been so. Advanced science and medicine went in parallel with committing war crimes in Vietnam. Art, music and culture that spread around the world together with death and destruction. High charity among a largely devout, simple and kind population but also domestic iolence, highest incarceration rate in the world and racist discrimination and murder of blacks. Movements like Black lives matter and challenging Islamophobia are growing but face daunting challenges. The biggest challenge is that I is a society driven by money and special interests. So islamophobia will continue to be promoted by a media under much influence from the Zionist movement.  The circus like atmosphere of the upcoming democratic convention will only be slightly better than the Republican convention.  That is because these is a system of elite interests that want it so.  But ultimately I believe changes happen in the US when enough people stop believing politicians and act to push policies through. That is how the US public pushed for civil rights, women right to vote, ending the war in Vietnam (genocidal war), ending support for apartheid South Africa, and getting 40 hour work week.  That pressure (and it is not a matter of voting another politician in or out) is what changes society. That pressure must also now increase to end US support for apartheid Israel, end US support for the Saud Royal family, end US attacks on Arab countries, end the escalation against Russia that could lead to war, really tackle climate change (and not via the weak step taken in Paris), tax the rich people fairly and take care of education for the young people and much more. 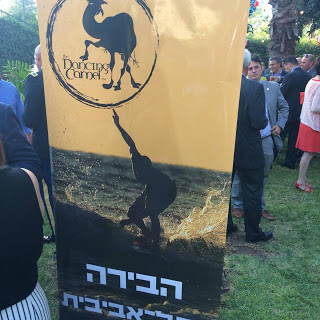 I do love fellow Americans (as I do all human beings even Israelis). I do not have to agree with US foreign policy and in fact my dislike of that AIPAC-led foreign policy that is bankrupting the US is born out of my love for fellow US citizens especially people who challenged or challenge the system. There are people like Malcolm X and Martin Luther King Jr. There are thousands of good Americans just on my own email list. I consider them the best hope for evolving the US out of this craziness.

Now on this “binarity”: have you noticed that the media and politicians repeatedly tell us that the world is binary? President Bush once said after 11 Sept. 2001: you are either with the terrorists or with us (I told them sorry I am with neither of you). Two million civilians killed since then and the same politicians and terrorists (both are killers) give us the same choice). They try to convince us that we have one of two choices (third choices or more are discounted). I must vote either for racist madman Trump of egotistical war monger Hilary Clinton who both lick the boots of Zionists and will kill more civilians. There are other choices!. Why can’t I choose to reject both Turkish Ordogan and the plotters of the military coup against him? Edward Said once told us we do not have to choose between a secular corrupt dictatorship and rule by Muslim Brotherhood. I do not have to support Zionism to be for Jewish rights. I do not have to support the Assad regime to be against the Saudi/US/Israel supported “rebel” groups who are nothing more than mercenary terrorists. We have many choices. It is time we exercise them.