27 Oct 2016 – Is there a new cold war? And what steps can be taken by whom to reduce tension and make peace?

Indeed highly relevant issues in an era of European history where the characteristics of a new Cold War are becoming ever more significant. And a good intellectual way to celebrate an important research institute’s 50th Anniversary, namely SIPRI – Stockholm International Peace Research Institute.

Now, what was this SIPRI supposed to be 50 years ago as the brainchild of, among others, brilliant visionary sociologist and social democratic politician Alva Myrdal who later became Sweden’s disarmament ambassador, wrote an impressive book on disarmament and security and received the Nobel Peace Prize in 1982?

If you go to its entry at Wikipedia, it is very clearly spelled out in 1966 (my italics):

“A Swedish Royal Commission chaired by Ambassador Alva Myrdal proposed in its 1966 report to establish an institute, later named the Stockholm International Peace Research Institute, SIPRI. The Institute’s research should seek to contribute to “the understanding of the preconditions for a stable peace and for peaceful solutions of international conflicts” and the Commission recommended that research be concentrated on armaments, their limitation and reduction, and arms control. The Commission also recommended that SIPRI work be of “an applied research character directed towards practical-political questions [which] should be carried on in a constant interchange with research of a more theoretical kind”.” 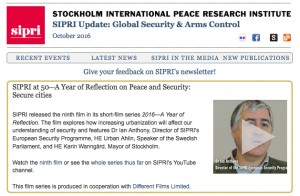 However, here is today’s research programs of SIPRI – also from Wikipedia:

The character of this program is pretty obvious:

SIPRI studies wars and arms and very little, if at all, peaceful solutions to international conflicts and the – theoretical – conditions of a stable peace.

So here are some videos in which four members of the international Governing Board of SIPRI answer those questions.

Two of them are mainstream international relations scholars, one British, one Russian. One, the head of the Board, is a Swedish diplomat not known for his independent thinking – as also comes through here. He blames Russia for all Europe’s problems, for not accepting a rule-based international order and changing borders (as if it were the only one!) and believes that withdrawal from Crimea is the first step towards preventing a new cold war and that “the whole world has to say No to Georgia’s being divided by Russian aggression. See, now you understand it all much better!

The fourth is a German diplomat who is related to finance management and chairs the highly mainstream, militarist Munich Conference on Security Policy. He has recently argued, in diplomatic terms of course, that dictator al-Assad should have been removed earlier, that Russia should have been countered by a Western intervention in Syria and that we must save both “pax americana” and the liberal international order. See, a true peace-thinker!

None of the four board members have a background in academic peace research.

When I saw the videos I asked myself a couple of “anniversary” questions and here they are with my short answers:

My congratulations at the 50th Anniversary of SIPRI, this once so promising, innovative institution! I know it was promising because I interned at SIPRI on and off for weeks as a young student in the 1970s when it was at the Wennergren Center sky scraper – leadership sitting at the top floor, those doing newspaper clippings on the lower floors. I’ve written reviews of SIPRI’s amazing Yearbooks and many special studies, not the least in the Danish daily Politiken in the 1970s and 1980s.

I got the greatest respect for the meticulous data collecting – “bean counting” – from only open sources that SIPRI is still very good at. (But that isn’t peace research).

I vividly remember the seminars and the dynamic leadership of its scholar-director, amazing Frank Barnaby whose knowledge about nuclear weapons and nuclear policies and passion for nuclear abolition impressed everyone who met him and listened to his dark rusty voice. I silently wonder whether such a character would be invited to SIPRI today?

In all friendliness, I have a proposal to make for the next decades of this mainly government-financed and not exactly independent institute as it professes to be:

Since its work has so conspicuously little to do with peace thinking and re-search into the vast and fascinating field called world peace, perhaps it’s time to change name to Stockholm International Military Security Institute, SIMSI?