Final declaration calls on non-state actors to “join us for immediate and ambitious action and mobilization.” 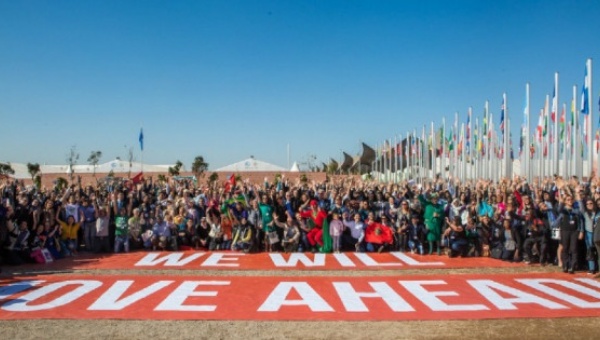 19 Nov 2016 – The final declaration of the UN COP22 climate negotiations, issued midnight on Friday [18 Nov] after a full day extension of the talks, saw 196 countries agreeing to a two-year time limit for implementation of the Paris Accord and a called for a global effort to “eradicate poverty” and “ensure food security,” by transitioning from fossil fuels to sustainable energy sources.

The declaration, issued in the darkening shadow of the election of a climate change denying U.S. President, also called for “strong solidarity with those countries most vulnerable to the impacts of climate change,” and demanded, “the highest political commitment to combat climate change, as a matter of urgent priority.”

The commitment to a two-year timeline for the creation of a “rule book” for the implementation of the Paris Accord is seen by many as crucial, given that agreement was purposefully vague on how countries would monitor and report their emissions reductions.

Reaction to the declaration, and its insistence that rich nations fulfill their commitment of $100 billion in financing to help impoverished nations transition to sustainable energy, was mixed.

“While the U.S. election could have derailed the negotiations, what’s happened in Marrakech has given hope that global action on climate change will not be deterred by isolated politicians,” said David Turnbull, campaigns director for Oil Change International.

However, Turnbull and many others noted that the declaration “failed to meet the urgency of the climate crisis,” given that the emissions reductions targets agreed to in Paris are voluntary, and even then will still allow global temperatures will exceed the crucial 1.5°C limit.

While the shadow of Trump’s elections loomed large over the conference, world leaders and climate activists alike were insistent that the momentum of the climate negotiations was irreversible and would not be derailed by Trump´s threats to pull out of the Paris Accord.

“Climate change is not going to wait for U.S. action and the rest of the world is clear it is moving forward,” said Benjamin Schreiber of Friends of the Earth U.S. “Trump’s election must unify the world in treating the U.S. as a climate pariah, and respond to his Presidency by redoubling ambition.”

“The lessons of Marrakech are clear,” said David Turnbull, campaigns director for Oil Change International. “Don’t look to bureaucrats or climate-denying Presidents to take the lead on global climate action. Look to the people in the streets and in communities around the world. These are the people-powered movements resisting fossil fuels and building a renewable energy future, and this is the path to victory.”

The declaration’s call for non-state actors to take “immediate and ambitious action” came on the same day as a group of activists chained themselves to the Trans-Northern pipeline on Mohawk territory in Quebec, Canada in solidarity with the ongoing Standing Rock Sioux land defense action in North Dakota.