Robert J. Burrowes’ article, “Life on Earth is Dying’” (Transcend Media Service, Dec 12, 2016) is one of the most important articles of our times. Burrowes writes with informed conviction of the disastrous consequences of humankind’s presence and actions on Earth. Humanity’s brief, but ruinous period of habitation, has been labeled “The Anthropocene Era.” In humanity’s (Homo Sapien Sapien) 200,000 years of presence on Earth, 50,000 years as “Modern Homo Sapien,” humans established hierarchical dominance among life forms (Although viruses contest this assumption!).

As one of many life species, humans rose from children birthed by our ancient mother, Lucy, in South Africa, to our present age. Today humans search the cosmos for ancestral ties and new planetary homes. Humanity’s ascent is indeed wondrous! Also wondrous is humanity’s descent! Humanity’s descent includes mass destruction of many life forms and life supporting contexts.

Clearly, nature is not free of the life destruction. Natural disasters transform the structure and process of life on Earth through natural “disasters.” Table 1 lists examples of major natural disasters.

Nature has been responsible for the extinction of many life species and expressions through its powerful forces. “Extinction,” is a harsh term, meaning absence of presence. Humanity now competes with nature as a destructive force, abetting extinction.

Much has been written about extinction, including Elizabeth Kolhberts’ essential volume, The Sixth Extinction: An Unnatural History (NY: Henry Holt, 2012). The value of Burrowes’ article resides in its condensed presentation, making it ideal for worldwide distribution, discussion, and debate in education, religious, military, political, and economic forums.

Burrowes documents the “death” of life on earth, offering many scholarly and popular materials, among them a vivid and tragic website: http://www.theguardian.com/envwideloife-being-pushed-to-the-edge-by-humans-in pictures

In my opinion, Burrowes’ article could poetically be entitled: “Becoming Mars!” This refers to the “Dead Red” planet we see nightly in our skies, a reminder of the consequences of human destruction of life. Ironically, we seek to travel to Mars for possible habitation. Is awareness of our tragic footprint of destruction preparing us planetary desolation, and encouraging planetary exploration.

There is something “archetypal” here. Is something inherent in human nature, an intuitive sense alerting us to the challenges of survival amid diminishing resources? Ahhh, eros and thanatos! Magical, mystical, or an inherent quality of life — élan vital

Burrowes writes with obvious urgency, alert to the spectrum of past and present abuses. Lesser scholars might demonstrate more tolerance for destructive events and forces; Burrowes, however, has been documenting the savage assault on earth’s life for decades. He is, a reluctant Jeremiah! One senses earnest pleas throughout his comments. Sotto voce, I hear him say: “Change, I beg you!”

The human tragedy of this perilous situation is our immunity and resistance to warnings. Burrowes’ relentless warnings compel us to understand the role of the human hand and mind in ravaging Earth. It may well be too late; but it is not too late to mobilize human conscience, and to identify and respond with wisdom to the unfolding challenges.

Burrowes’ article deserves widespread posting and discussion in every forum: Issue: survival! Time: short! Possibilities: limited! Consequences: apocalyptic! The destruction of life on earth is happening on our watch. This amidst emerging global consciousness!

The phrase, “The whole world is watching,” once used to shame egregious military actions is appropriate here.

In an effort to raise consciousness, I prepared a visual display of the destruction of life expressions and processes. Chart 1 summarizes the “destructions of life” occurring in our Anthropocene Era. I imagine the chart being placed on refrigerator doors, the prime location for reminders and important events. “Remember to bake cookies for the cub-scout meeting.” “Remember to buy stocks.” “Remember to bet on the Colts.” “Remember we are destroying life!” Competing priorities! Wonder what we will say in 2030? 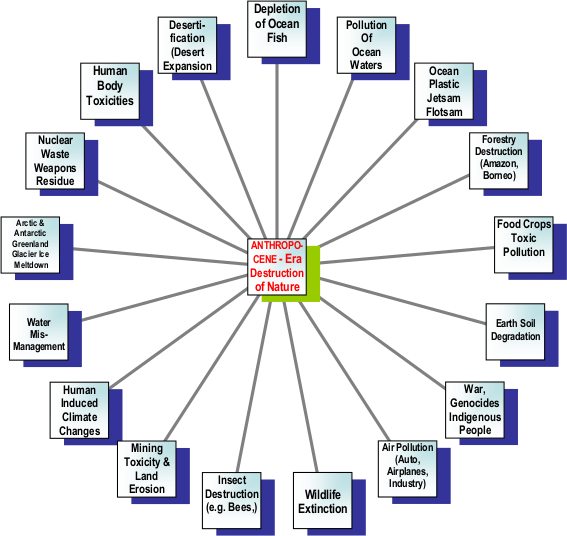 We have failed to use our remarkable endowment for choice. We are content with comforts and rewards of indifference, apathy, passivity! We accept delusions: “It is someone else’s problem!” “I can’t do anything about it!” “I have no power to make a difference.” “Where is my remote?” So be it!

Burrowes notes “consumerism” contributes to the “death of life on earth.” The immediacy of our desires, fueled by devious advertisements, compels us to buy and buy, without consideration of the consequences. Consumerism is an ideology, a political economy, and a moral choice.

Advertising rules our lives! It does so skillfully and insidiously, over-riding judgment and evaluation. Have you noticed TV advertisement images and displays change every few seconds; this is done to capture and hold attention? Smart! The technology of behavior and mind control!

James Spieth (2012), in his visionary volume, America the Possible: Breaking the Chains of Consumerism (New haven CT: Yale University) and Lizabeth Cohen (2003, NY: Vintage Press) in her volume, A Consumer’s Republic: The Politics of of Mass Consumption, provide important insights into the historical courses leading to the present destruction of life summarized by Robert Burrowes. Spieth, in an article published in Common Dreams (September 10, 2012), notes Cohen’s trenchant words:

Referring to the era of postwar prosperity that lasted approximately from 1945 to 1975, she notes: “this period of unprecedented affluence did much more than make Americans a people of plenty. Undergirding the pursuit of plenty was an infrastructure of policies and priorities, what I have dubbed, for shorthand, the Consumers’ Republic. In reconstructing the nation after World War II, leaders of business, government, and labor developed a political economy and a political culture that expected a dynamic mass consumption economy not only to deliver prosperity, but also to fulfill American society’s loftier aspirations.” (http://www.commondreams.org/view/2012/09/10-1).

If conspiracy is collusion to engage in insidious and secretive acts to benefit some at the expense of the others, we can consider consumerism an ideological conspiracy. Once established and supported by advertising mavens, consumerism now dominates the global economy. The Earth cannot sustain endless consumerism! Essential human needs are trumped by unneeded wants; unless, of course, we consider beer and a cheeseburger as non-essential. Difficult choices need to be made!

Robert Burrowes, and his partner, Anita McKone, map out a fifteen year effort entitled the Flame Tree Project to Save Life on Earth (tinyurl.com/flametree). “It may well be too late, but if we do nothing, then the course is sealed.” To some extent, indigenous people around the world offer models for harmonious living and life preservation. I do not wish to glorify indigenous life, but there is something to be learned about indigenous society accommodation to harmony with life. Some say this is spirituality.

In the pursuit of profit at any cost, complex life ecologies have been ignored or denied. Destruction of life in one area, results in destruction of others. Fracking is a perfect example of this failure. Driven by oil, we destroyed water and land. We promote earthquakes! Whether natural forces are responsible for destruction is no longer an issue. Humans are an obvious source of causation, exacerbation, and continuation of life destruction. Climate change is real!

To a large extent, some fault can be traced to Biblical admonitions claiming “God made man the master of all things.” Gifting this erroneous assumption with Biblical status as God’s words has had tragic consequences. The Biblical quote, “God made man in his image, and ….” (Genesis 1:28) is a major source of human hubris.

Attributing these words to God is a mistake. They are human words, written by human hand and an enormous ego. In penning these words, and attributing them to God, humans are given guilt-free license to assault every form of life for their narrow self interest. We cannot ignore the reality of our responsibilities to all life forms and expressions.

As has been written many times, humans are a part of life; humans are not the master! The delusion of the “master” role and status denied and limited “wisdom.” Were I back in the classroom, I would teach three things: (1) Humans are life creations, part of life, not masters (Lifeism); (2) Humans are destroying life, driven not by survival needs, but by consumerism ideologies; (3) Biblical myths and political economy systems have destructive implications for life’s survival.

Humanity is in need of a reference identity belief system and ideology which can better accommodate all life. To my fellow humans, I say learn humility, reverence, veneration, awe, and wonder, not for magnificent human achievements (buildings, flight, medicine, technologies), but for the obvious reality we are a form and expression of life, not the master.

We are creatures of life, akin to all forms of life, including plants, weeds, insects, and animals, rivers and mountain. See, for example, Lifeism (Marsella, A.J. [March 17, 2014. Lifeism: Beyond Humanity. Transcend Media Service (TMS.org). www.transcend.org/tms/2014/03/lifeism-beyond-humanity/

If we continue to avoid this “basic identity,” in favor group, society, and national identities, we risk the remaining days of life will be lived in deprivation and extinction. Mars awaits us!

Anticopyright: Editorials and articles originated on TMS may be freely reprinted, disseminated, translated and used as background material, provided an acknowledgement and link to the source, TMS: “Becoming Mars”: Destruction of Life on Earth, is included. Thank you.

One Response to ““Becoming Mars”: Destruction of Life on Earth”