School in an Aleppo Factory: The Occupiers Denied Children Education – Now They Get It 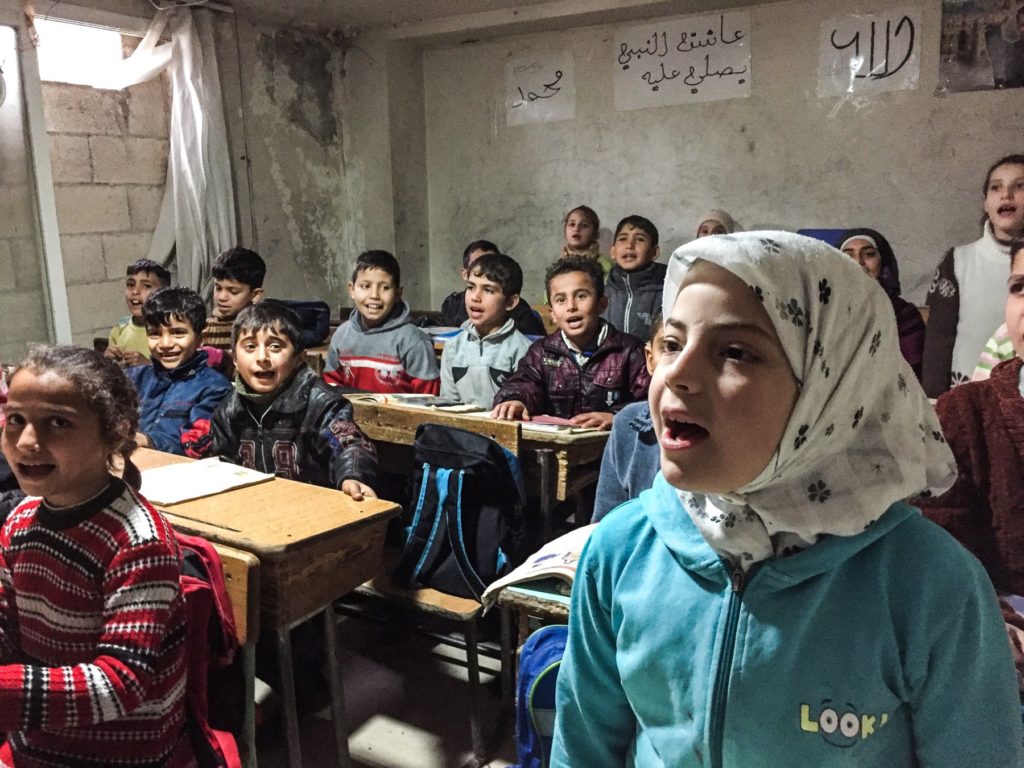 © Jan Oberg 2017. All rights reserved to these images. Under no circumstances must any of them be reprinted or reposted online without my written consent.

5 Feb 2017 – We are in the huge industrial city a little outside Aleppo – Sheikh Najjar. It was one of the largest industrial centres in the Middle East, the largest in Syria with around 2000 enterprises of great diversity and providing the livelihood of 30.000-40.000 workers. It’s estimated that it represented about half of Syria’s industrial capacity.

With over 2 million citizens, Aleppo used to be the largest city in Syria and a magic meeting point of many cultures, people and activities situated as it were at the famous Silk Road.

Read about Aleppo here and see its amazing beauty, its magnificent architecture and diversity. Aleppo was a UNESCO World Heritage site. It belonged of course first of all to the Aleppians but also to the Syrian people, to the Middle East and to the rest of humanity.

From when Eastern Aleppo was swiftly occupied and looted in 2012 by the defector, anti-government Syrian Free Army, FSA, and terrorist groups like ISIS and al-Nushra until its liberation on December 12, 2016 it’s been virtually totally destroyed. See my photo series about the destruction outside its Old City.

It’s December 13, 2016, and I am being guided around in this industrial zone by a man who knows both Syria and Aleppo and this zone extremely well: forty-six years old Fares Al-Shehabi. He is out of an old respected and wealthy Aleppo family, an independent member of the Syrian parliament, chairman of its planning committee and he heads the Syrian Chamber of Industry.

His enterprises in several branches have been looted and more or less destroyed; he has personally been hit by EU economic sanctions although, according to him, the EU has never been able to prove that he has financially backed the Syrian government.

Reuters talked with him in 2012 about why he is one of the few who have stayed and what risks he has taken – and what he has experienced with the Western-supported occupiers of his town.

al-Shahbi speaks with passion and strong voice. He is dynamic business man and a patroit. Having suffered and also lost a lot, Al-Shehabi was – understandably – an angry man already by autumn 2012:

“It (the sanctions) violated my rights and they (the EU) did not hear my side of the story. I challenge them to provide a single proof that I financially backed any side,” he said.

Although he blames the rebels for most of the damage to the city, Shehabi is now also critical of authorities’ handling of the crisis, saying the government has been slow to promote political reforms and to fight organised crime.

“Aleppo is being punished by the revolution and now neglected by the state,” he said.

But when Sheikh Najjar had been liberated, Shehabi turned his anger into something constructive: He donated one of his partly damaged factories to the Ministry of Education and let it use the building as a school.

But now first a few images of the area and a 30 sec vide…on that rainy day of December 13, 2016 in Industrial City.