The World Protests as Amazon Forests Are Opened to Mining

28 Aug 2017 – The Amazon, often described as the “lungs of the Earth”, is the largest rainforest in the world. Its extraordinary biodiversity and sheer scale has made it a globally significant resource in the fight against climate change.

But last week the Brazilian president Michel Temer removed the protected status of the National Reserve of Copper and Associates, a national reserve larger than Denmark.

The reserve, known as “Renca”, covers 46,000 square kilometres and is thought to contain huge amounts of copper, as well as gold, iron ore and other minerals. Roughly 30% of Renca will now be open to mining exploration. Renca also includes indigenous reserves inhabited by various ethnic communities living in relative isolation.

The decision, which has been denounced by conservation groups and governments around the world, comes as the unpopular Temer struggles with a crushing political and economic crisis that has seen unemployment rise above 12%.

Brazil is currently in the middle of the largest corruption scandals in its history. Since 2014, an ongoing federal investigation called Operation Car Wash has implicated elite businesspeople and high-ranking politicians, uncovering bribes worth millions of dollars exchanged for deals with the state oil company Petrobas. According to the BBC, almost a third of President Temer’s cabinet is under investigation for alleged corruption.

There is no doubt that Brazil needs to find ways out of recession and unemployment. As the minister of mining and energy has said, “the objective of the measure [to allow mining] is to attract new investments, generating wealth for the country and employment and income for society.”

However it’s not clear that this move will benefit ordinary Brazilians. This is not the first gold rush into this area, and the Amazon still has high indices of poverty and many other challenges.

During the 1980s and 90s tens of thousands of miners flocked to gold deposits in the Amazon, driven by high international prices. One of the most famous examples, “Serra Pelada,” saw 60,000 men dig a massive crater in the Amazon Basin. 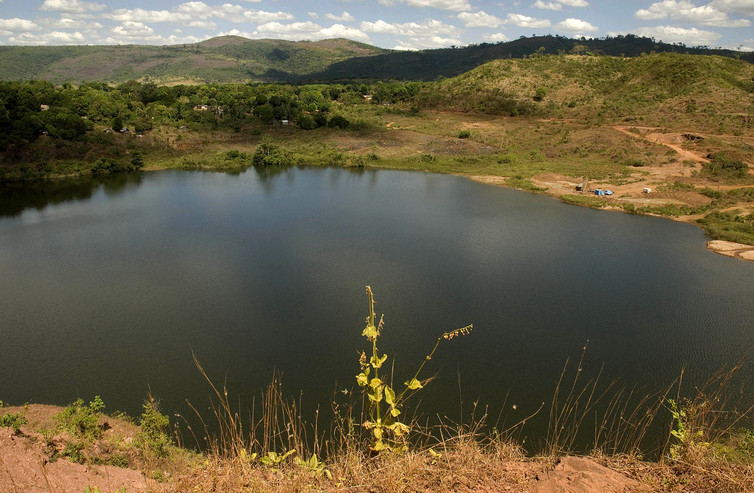 This polluted lake is what remains of the open mine pit of Serra Pelada (‘Naked Mountain’), hand-excavated by tens of thousands of miners in the Amazon Basin. REUTERS/Paulo Santos

These mining operations typically provided little economic benefits to the local populations. Instead, they attracted thousands of people, which led to deforestation, violent land conflicts and mercury pollution in the rivers.

In reality the Amazon and its people deserve a sustainable model of development, which takes advantage of the outstanding biodiversity and beauty of its standing forests. The historical record shows mining is likely to lead to a demographic explosion, and further deforestation, pollution and land conflicts.

The principle of non-regression

One important aspect of international environmental law is called the “principle of non-regression”. The principle states that some legal rules should be non-revokable in the name of the common interest of humankind. Essentially, once a level of protection has been granted there is no coming back.

This principle is reflected in article 225 of the Brazilian constitution, which lays out the right to a healthy environment:

All have the right to an ecologically balanced environment […] and both the Government and the community shall have the duty to defend and preserve it for present and future generations.

The Brazilian constitution also describes the Amazon forest as a “national heritage”. It must then be treated accordingly.

Read more: Deep in the Amazon jungle, Brazil’s ‘hidden cities’ are in crisis

While the Amazon is a fundamental part of Brazil’s history, it’s also an essential part of the global battle against climate change. The Amazon contains half the worlds’ tropical rainforests, and its trees absorb and store vast amounts of carbon dioxide.

According to the Intergovernmental Panel on Climate Change, land use, including deforestation and forest degradation, is the second-largest source of global emissions after the energy sector.

Developed countries around the world have committed resources to help Brazil offset the costs of safeguarding their forests. One example is the Amazon Fund, created in 2008. It has received billions of dollars from foreign governments such as Norway and Germany, to combat deforestation and to promote sustainable practices in the Brazilian Amazon.

But with 14 million Brazilians unemployed, further assistance is required to ensure that they can protect their forests.

As well as governments, companies have also committed billions of dollars to fight climate change and support projects that reduce carbon emissions and promote energy efficiency. Most businesses have also created self-regulatory standards to ensure compliance with international laws and ethical standards.

The decision of the Brazilian government leaves us with two questions. How will the international community honour their commitments to keep global warming below 2℃, if countries begin rolling back their environmental protections? And how will companies involved in mining projects in the Amazon honour their social responsibility commitments and moral obligation towards present and future generations?

The degradation of the Amazon will affect the entire world. The clearing of the Amazon for mining will lead to the emissions of thousands of tons of greenhouse gases, furthering global warming and causing the irreversible loss of biodiversity, and water resources, as well as damage to local and indigenous communities.

Let us not take a step back towards more destruction. Rather, let us strengthen the protection of our remaining forests.