23 Oct 2017 – The 2017 Nobel Peace Prize has been awarded to ICAN (International Campaign for the Abolition of Nuclear Weapons). This is the third time that a non-governmental organization dedicated to disarmament receives this prestigious honor. In 1985 and 1995, respectively, IPPNW (International Physicians for the Prevention of Nuclear War) and Pugwash Conferences on Science and World Affairs were the recipients of the Prize.

During the past decade ICAN developed intense activity in the preparation and support of the negotiation of the prohibition of nuclear weapons, leading to their elimination. A treaty to that effect was adopted last July 7 at the United Nations. 122 States in many civil society organizations participated in the negotiations. Austria, Brazil, Ireland, Mexico, Nigeria and South Africa were the original promoters of the initiative and Brazil was the first State to sign the new Treaty, on September 20, on the occasion of the opening of the 72nd Session of the General Assembly of the United Nations. 53 other countries also signed it on that date and many more are expected to do the same in the next few months.

The instrument prohibits development, testing, production, acquisition, possession, stockpiling, use or threat of use of nuclear weapons as well as their emplacement in the territories of other States. Its Parties are obliged to provide assistance to individuals affected by nuclear tests and to take measures to remedy environmental damage in regions contaminated by such tests. Besides, it provides a path for the adoption of future measures for the elimination of existing nuclear arsenals.

The award of the 2017 Nobel Peace Prize reflects the growing acknowledgement by the international community that the outlawing of nuclear weapons must be a part of the normative basis necessary for the achievement and maintenance of a world free of such armament. Peace and security cannot continue to depend on the possibility of use or weapons capable of wiping out human civilization.

The governments and civil society organizations that took forward this important progress in the multilateral treatment of disarmament questions know perfectly well that the new treaty will not make nuclear weapons disappear immediately. Nevertheless, they believe that it will raise the awareness of the need for concrete and irreversible measures for their elimination. The other two categories of weapons of mass destruction – bacteriological and chemical – were already abolished by international treaties abided by the overwhelming majority of States. Mankind must now eliminate nuclear weapons.

In 2018 the United Nations will convene a High Level Conference on Nuclear Disarmament. All States, including the possessors of such armament and their allies must be represented by their highest officials in order to take advantage of this opportunity to participate in a process that may bring a new impetus to the debate on the non-proliferation and elimination of atomic arms. ICAN and the promoters of the Prohibition Treaty will certainly be in the forefront of the effort to achieve new positive results. 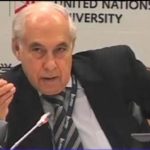 Sergio Duarte, a Brazilian Ambassador, is a member of the TRANSCEND Network for Peace Development  Environment; President of [1995 Nobel Peace Laureate] Pugwash Conferences on Science and World Affairs; former UN High Representative for Disarmament Affairs; former Chairman of the Conference of the Parties to the Treaty on the Non-Proliferation of Nuclear Weapons; and former President of the Board of Governors of the International Atomic Energy Agency.

Pugwash seeks a world free of nuclear weapons and other weapons of mass destruction. We create opportunities for dialogue on the steps needed to achieve that end, focusing on areas where nuclear risks are present. Moving beyond rhetoric, we foster creative discussions on ways to increase the security of all sides in the affected regions.

Anticopyright: Editorials and articles originated on TMS may be freely reprinted, disseminated, translated and used as background material, provided an acknowledgement and link to the source, TMS: Nobel Peace Prize for Nuclear Disarmament, is included. Thank you.

One Response to “Nobel Peace Prize for Nuclear Disarmament”