2 Dec 2017 – The People’s Peace Prize According to Nobel’s Will
Celebration-Seminar-Banquet, Orust Peace Movement at Svanvik, Sweden 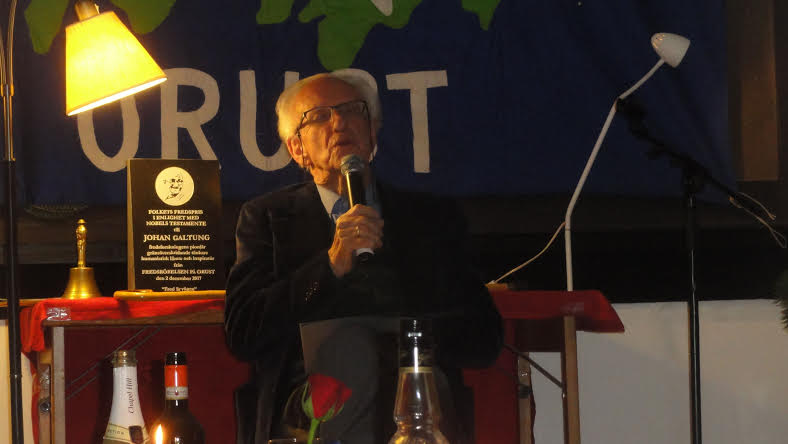 Most gratefully received: a beautifully engraved granite stone that will adorn our garden in Spain, and a wonderful diploma!

I am deeply moved, with a feeling that my long life dedicated to the theory and practice of peace, particularly since 1958, 50 years ago, has arrived, has been understood, and has been appreciated.

The “Nobel Peace Prize” administered by Norway is fake. Far from Nobel’s will inspired by Bertha von Suttner’s Nie mehr Krieg as a prize for reducing standing armies, understanding among nations, and peace conferences, to a prize compatible with US-Norwegian policies.  The 2017 prize to ICAN was a felicitous exception to that rule.

The Norway to which Nobel bestowed the honor of awarding the prize was part of Sweden-Norway dedicated to the Marshal Bernadotte – King Karl Johan policy of neutrality, from 1835. Today’s Norway is member of an anti-Russian NATO alliance headed by the most belligerent state in world history that even surpassed the Roman Empire in early 1990s. With 248 US military interventions since Libya in 1801, and more than 20 million killed in 37 countries since 1945.  Norway never protested.

In 1949 Norway should have understood that a membership in a US-led military alliance and the awarding of the Nobel Peace Prize are mutually exclusive. The honor of awarding that prestigious prize should have reverted to neutral Sweden.  But Oslo wanted prestige and alliance. Northern Norway, with a 240 Km Russian border and 1,000 years of peace, knew better.

NATO changed from defensive, with Art. 5 proclaiming that attack on one member is an attack on all and became de facto offensive, with attack by one member being an attack by all; on Afghanistan, on Iraq… A belligerent Norwegian prime minister became Secretary General of anti-Russian NATO, demanding bigger standing armies. This reduces the credibility of a prize awarded by official, not private, Norway, for peace policies the country itself evidently does not believe in.

A Life with Peace Issues.  Yes, that is the story as a child of peace movements like War Resisters’ International. Six life points:

Early on six wrong approaches to peace were identified; they may be necessary or helpful, but certainly not sufficient:

Dissatisfaction with theory and practice led over years to the Transcend Method, an evolving approach to peace, now characterized by:

Formulas for Peace. Yes, I think there is a Six Elements Formula, and more particularly one that reads as follows:

As shaped by DEEP CULTURE and DEEP STRUCTURE.  To spell it out:

The formula specifies four jobs to be done, with two constraints.  Conflicts are ingested, digested, for negative peace (denominator) and positive peace (numerator), energizing individual and social bodies. Violence is forgotten, as relic of the past like feudalism. Excreted.

However, the proof of a pudding is in the eating, and there are many “puddings” around.  Here are Six Recent Cases, with visions:

And here are Six Current Cases in the light of their Karma Years:

Being a Norwegian please permit me Six Wishes for Norway:

Peace Banquet and the Prize. The Six Dishes, with tea-coffee, included grilled eco-chicken and mango-tango. Delicious. 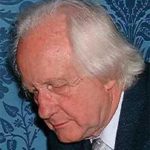 Anticopyright: Editorials and articles originated on TMS may be freely reprinted, disseminated, translated and used as background material, provided an acknowledgement and link to the source, TMS: Johan Galtung’s Acceptance Speech of the People’s Nobel in Sweden, is included. Thank you.