The Norwegian founder of peace research, Johan Galtung, received the People´s Nobel Prize in conformity with the testament of Alfred Nobel that is awarded annually by the Swedish peace group at Orust.

A seminar connected with the award ceremony reacted with consternation to the present infighting in the Norwegian parliament and to hear that the Stortinget selects the Nobel Committee members based on party interests not on knowledge of peace thinking and belief in cooperation among nations and the abolition of armaments that was the roadmap for global peace that Nobel intended to support with his prize.

“Norway should have left the task to others in 1949,” Galtung said, while at the same time offering recognition for committee chair Berit Reiss-Andersen for this year´s prize against nuclear weapons.

The People´s Peace Prize came about after the Norwegian awards lost all contact with the Nobel method for durable Peace, stated Tomas Magnusson, a former President of the IPB and now a leader of Nobel Peace Prize Watch.

He informed that Johan Galtung for years has been on the NPPW short list of persons who are nominated and qualified to win the official Nobel Prize. Magnusson thought that the struggle for seats in the Nobel committee this fall has made it apparent to everyone that the official Nobel Prize today is about self-centered Norwegian parliamentarians lusting for the coveted seats and how little the prize now has to do with the original peace vision Nobel wished to stimulate.

“An increasing number of people around the world, and also in Norway, find the Norwegian management of the prize embarrassing,” said Magnusson. 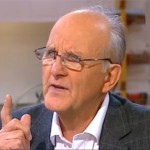 Anticopyright: Editorials and articles originated on TMS may be freely reprinted, disseminated, translated and used as background material, provided an acknowledgement and link to the source, TMS: Sweden: Johan Galtung Receives the People’s Nobel Prize, is included. Thank you.