On January 17, 1893 a coup d’état was carried out against Queen Lili’uokalani and the Hawaiian Kingdom by foreign resident business interests with the assistance of U.S. Marines from the USS Boston. An illegal U.S. occupation of Hawai’i has continued ever since. Contrary to popular belief there never was a Treaty of Annexation. Commemoration ceremonies are scheduled on Jan. 17, 2018 in Honolulu at Iolani Palace. For more information see http://www.onipaakakou.org/ 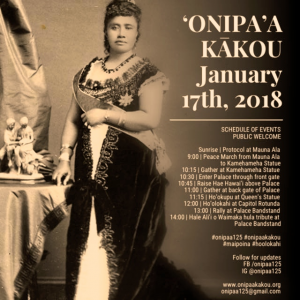 Queen Liliuokalani, the last Hawaiian monarch overthrown by American businessmen and navy, died of grief under house arrest at the Royal Iolani Palace in Honolulu.

Today, occupied Hawai’i is home to more than 100 U.S. military installations, a runaway tourist industry and settler population that has turned Hawai’i into a playground for rich land speculators. Nearly 1 in every 2 households can’t cover basic needs.  Native Hawaiians (Kanaka Maoli), who make up 20% of the population, now make up the majority of homeless and 60% of the prison population in their own homeland. The sacred Kanaka Maoli temple — Mauna Kea, is being desecrated and vandalized by scientific development, and 90% of food consumed in Hawai’i is now imported to what was once a 100% food self sufficient society.