8 Feb 2018 – Following last month’s protests challenging Iran’s theocratic regime, including women across the country climbing on telecom boxes, taking off their headscarves and waving them aloft on sticks, police quickly arrested 29 women accusing them of protesting against a law that makes wearing the hijab compulsory. When Vida Movahed, a 31-year-old mother, clambered up an electrical box and was pictured waving her head scarf from a stick on a busy street in Tehran, this courageous lady was arrested and held for about a month before being released, according to activists. Thousands of social media users have shared messages, dubbing her the “Girl of Enghelab Street” after the area in central Tehran where she staged the protest, and using the hashtag “Where_is_she?” “Before even being tried by legal authorities, [women] are taken to a place called ‘Gasht-e Ershad’ [Guidance Patrol], where they can be harshly beaten up. Whether a case is opened for them or not is not important,” she said.  “The illegal punishment they have had to bear has always been much more than what is foreseen in the law.” Sotoudeh accused the police of frequently going beyond the law. 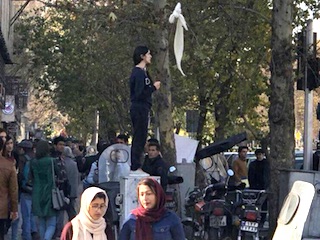 New waves of protests continue to draw more support with hijab flying still spreading across the country focusing on demands for personal freedoms. Iran’s socio-economic malaise can explain neither the way protesters mobilized in such scattered local sites nor the velocity by which the protests have spread.

Iran’s anti-hijab campaigners grow bolder weekly with spreading public demonstrations of defiance. The demonstrations, which included dozens of women on 7 Feb 2018 according to the Wall Street Journal continue as they expose deepening differences between Iranian President Hassan Rouhani, a relative “moderate” who has courted women’s support, and “Supreme Leader” Ali Khameini who opposes any easing of strictures on the head scarf, or hijab.

“Iranian society is squarely in a post-revolutionary phase,” according to Ali Vaez, Iran project director at the nonprofit International Crisis Group. Among the images and videos shared on social media one 2/7/2018, one showed a woman with hair dyed pink. Others stood in parks or the middle of busy roads and flashed peace signs at passersby as they waved their hijabs, in the air. The January demonstrators and those protesting the hijab “have been frustrated with the government’s empty promises, which haven’t been fulfilled at all,” said Shadi Sadr, an Iranian lawyer and women’s rights activist based in London who runs nonprofit Justice for Iran.

Soheila Jolodarzadeh, a female member of the Iranian parliament, said the protests were the result of longstanding restrictions. “They’re happening because of our wrong approach,” she said, according to the semi-official Ilna news agency. “We imposed restrictions on women and put them under unnecessary restraints. Therefore, women from Enghelab Street and now across Iran are putting their hijab on a stick.”

Iran’s ‘morality police’ released statistics claiming that they arrested or sent to court 3.6 million women over the recent past because of how they wear the hijab, so these arrests are not new.  People are protesting exactly because of such a crackdown, according to MP Soheila Jolodarzadeh.

Many religiously conservative Iranians are among those now supporting the protests, with many insisting that religious dress should be a personal choice.

Photos shared on Twitter increasingly show women in traditional black chador robes, standing on pillar boxes with signs supporting freedom of choice for women. One held a sign reading: “I love my hijab but I’m against compulsory hijab.”  Female activist Azar Mansouri, a member of the reformist Union of Islamic Iranian People party, said attempts to control female clothing will continue to fail.

President Hassan Rouhani, in a break with “Supreme Leader” Ali Khameini, insists that authorities must listen to protesters behind the Hijab unrest, hinting that it risked another revolution if their demands are ignored. Rouhani, insisted that popular support will crumble if his fellow elites did not listen to protests that have swept the country in recent weeks. “The previous regime thought monarchical rule would last forever, but it lost everything for this very reason — that it did not hear the criticism of the people,” he added, Rouhani said at the shrine of revolutionary leader Ayatollah Ruhollah Khomeini in southern Tehran, flanked by Khomeini’s grandson, Hassan Khomeini, a prominent reformist.

Rouhani has now clearly allied himself with reformists including the release of political prisoners. “No one can stop the great people of Iran from expressing their views, criticism and even protest,” he said. The shah’s regime “did not hear the voice of reformers, advisors, scholars, elites, and the educated,” said Rouhani. “It only heard the voice of revolution and by then, it was too late.” His comments echoed the sharp criticism a day earlier from jailed reformist Mehdi Karroubi, who has been under house arrest for the past seven years for leading protests in 2009. Karroubi lashed out at Ali Khamenei in an open letter, saying major reforms were needed “before it is too late”.

The charge against Rouhani is that he has failed to deliver reforms as promised. More than 10 million Iranians, among 80 million, now live in absolute poverty, according to official figures.

Against the Ayatollah and the Mullahs, the charge is that what they have delivered — power and wealth only to the clerics, social repression, foreign wars — are not what the Iranian people want. Yet it is also meaningless in retrospect to call the recent protests inevitable. Iran’s larger socio-economic malaise can explain neither the way protesters mobilized in such scattered yet small local sites nor the velocity by which the protests spread so widely.

Opposition figure Mahdi Karroubi, who is currently under house arrest, has voiced rare criticism of Supreme Leader Ayatollah Ali Khamenei, blaming him for the “disastrous results” of the Revolutionary Guard’s vast political and economic influence. In a rare open letter published recently, Mahdi Karroubi claims that Khamenei violated the constitution, and called on him to order the Revolutionary Guard to loosen its grip on the economy.

Karroubi further insists that the nationwide street protests “corruption and discrimination” are an alarm bell for the authorities to reform the economic and political system. Pressured by soaring food prices, the protests – the biggest in Iran since the post-election unrest of 2009 – took on a rare political dimension, with a growing number of people calling on Khamenei himself to step down.   He added that by vetting candidates in elections, Khamenei had reduced parliament to “an obedient assembly” under his thumb and the influence of Revolutionary Guards lobbies. he added that the Assembly of Experts, a council of elected clerics charged with electing, supervising and even disqualifying the Supreme Leader, has turned into a “ceremonial council that only praises the Leader.”

Karroubi further said December’s nationwide street protests “corruption and discrimination” were an alarm bell for the authorities to reform the economic and political system. Pressured by soaring food prices, the protests – the biggest in Iran since the post-election unrest of 2009 – took on a rare political dimension, with a growing number of people calling on Khamenei himself to step down.

Khamenei’s power is also financial. A major portion of Iran’s national budget goes to the office of the supreme leader and its affiliated institutions. This funding is not subject to government oversight, and no one but Khamenei himself knows how much money he receives. Nor does anyone control how he spends it. Since 1979 revolution, the office of the supreme leader has laid out billions of dollars to expand the influence of his faith, Shia Islam, across the Middle East. War is a key part of that foreign policy. Since 2011, Ali Khamenei has sent Iranian troops into Syria’s civil war to keep his favored regime  in power. The supreme leader is also behind Iran’s controversial nuclear program and the  country’s insistence on processing nuclear-grade uranium  which has brought international sanctions, invasive inspections and global political criticism to Iran.

Reformers have publicized a series of eight nonnegotiable demands:

Increasingly Iranians are demanding the end to Supreme Leadership and to govern themselves. Under Ali Khamenei’s total control, institutions established at the beginning of the 1979 Revolution to wipe out poverty have turned into conglomerates that own half of Iran’s wealth without a supervisory organization to question their actions. Iranians generally see no future with a theocratic dictatorship.

Anticopyright: Editorials and articles originated on TMS may be freely reprinted, disseminated, translated and used as background material, provided an acknowledgement and link to the source, TMS: As Iran’s Women Continue to Rise and Fly Their Hijabs… Woe Be Unto the Mullahs, is included. Thank you.