8 Feb 2018 – As is well known, Mohandas Gandhi had gone to England in 1888 at the age of 19 years to train as a lawyer. Before going his mother Putlibai who was a devout person, deeply religious and given to fasting regularly, extracted a promise from her son to abstain from wine, women and meat.  Mohandas followed her advice and the promises he had made but on arriving in England, started dressing like a British person and tried to behave like one by taking lessons in dancing and elocution and following other traits of a British gentleman.

On returning from England to Gujarat after getting his Bar degree, a Muslim firm in South Africa sought his services as a lawyer. After talking to his brother and other friends Gandhi decided to go to South Africa to work as a Barrister for a firm owned by Abdulla Sheth. He sailed for his new destination from Bombay (now Mumbai) in April 1893 and the unusual experiences he was to have started right from the ship that he was sailing in.

He had thought that he would stay for only a year in South Africa but as it turned out he remained there for 21 years and returned to India in 1914. His stay in South Africa was a deeply learning experience – it had a profound effect on him in terms of observing the oppression and prejudice suffered by Indians who were working there and the racial incidents that he himself was subject to. He gradually became aware of the behavior of the white rulers towards not only the black populations but also towards Indians and other non-white people. Gandhi met many people both Indians and Europeans and these meetings and conversations he had with them led to a deep impact on him in terms of his understanding of the colonial mindset and how Indians were reacting to injustice, ill behavior and occasionally cruelty.

It was not long after his arrival in Durban in South Africa before he experienced his first humiliation. He was travelling from Durban to Pretoria by train in the first class coach for which he had a valid ticket. But after a short distance only the coach attendant told Gandhi that he could not travel by the first class coach which was reserved only for whites. Despite Gandhi’s protests that he had a valid ticket for the coach, he was thrown out of the train when it reached Pietermaritzburg. It was night time and extremely cold and Gandhi shivered in the waiting room and wondered why he had to suffer this indignity and humiliation. The thought of returning to India occurred to him but then he decided that he would stay on and fight for his rights against this patent injustice and discrimination. Ironically, a statue of Gandhi NOW stands in that city 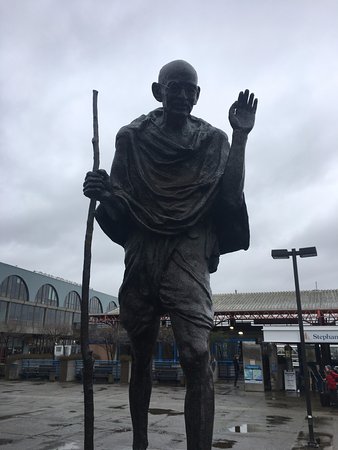 His ordeal was not over. The next day he while he was travelling by a horse driven stagecoach to Charlestown, the driver forced him to sit with him and not inside the coach because the driver felt that the white passengers would object to his sitting along with them. A little distance later when one of the passengers came out of the coach to smoke, Gandhi was forced to sit on a mat that was placed below the driver’s seat. When Gandhi protested, he was abused and beaten by the driver. Fortunately, some passengers heard of the commotion and asked Gandhi to step inside the coach for the remaining part of the journey.

Apart from these incidents of personal abuse and humiliation Gandhi observed a deeply racist approach to the Indians who had migrated to this country as indentured labor in Natal and Transvaal in 1860s and later. Worse, Indians’ marriages were not recognized, their voting rights were being taken away. A bill was passed in Transvaal in 1907 that made registration and fingerprinting of these laborers mandatory. Other discriminatory practices of allowing the police to enter the homes of labor were also continuing. Against all this injustice and discrimination, Gandhi hit upon the idea of passive resistance or what he called satyagraha to stop these unjust and racially motivated practices.

The idea of peaceful resistance came partly from the books that he was reading and the discussions he was having with people of all faiths who also felt unhappy with the patent injustice and discrimination.  Some of the books that inspired him were Edwin Arnold’s Light of Asia, Henry Thoreau’s On the Duty of Civil Disobedience. He was also greatly inspired and affected by Tolstoy’s ‘The Kingdom of God is within you’ written in 1893. In fact, Gandhi started writing to Tolstoy and their correspondence also deeply affected him and made him admire Tolstoy’s philosophy.

Apart from these books that he was reading Gandhi also started reading about Hindu religious texts such as Bhagwad Gita and the Vedas etc. He also was keen to understand about other religions – Christianity, Islam, and Jewish and Parsee faiths and used to have long and fruitful discussions with eminent men of these faiths and tried to contrast them with the Hindu religion of which he often said that he was a devout Sanatani Hindu. One of the Jewish friends with whom he developed a deep relationship, bought a huge farm so that Gandhi could carry on his political experiments. The farm was renamed the Tolstoy Farm.

While learning about the different religions, Gandhi also learnt about the practice of satyagraha which he used both in South Africa as well as in India later. In fact, the first Satyagraha that he practiced in India was the Champaran Satyagraha in Bihar in 1917 against the forced indigo plantation.  He subsequently adopted this practice on several other occasions and the Salt March or the Dandi March in 1930 against the imposition of a tax on salt by the British rulers, is a well-known one.

Another significant contribution of his stay in South Africa was the path breaking book Hind Swaraj (Indian Home Rule) that he wrote while returning to South Africa from England in 1909. It was written in his native language Gujarati and has now been translated into all major world languages. The book was written on the ship’s stationery. It is said that when he got tired by writing with his right hand, Gandhi switched to writing with his left hand and completed the text of the book by the time that the ship reached Durban. The book is a small one consisting of only 62 pages and explains how India was colonized and what Indians should do to come out of colonial yoke. It also writes about a relevant form of education that he called Nai Talim (New form of education).  This book along with his Autobiography form part of the vast amount of writings of Gandhi both in Africa as well as later in his life in India.

Gandhi as most of us would agree was one of the greatest political figures of the last century. He has been an inspiration for many world leaders including Nelson Mandela, Bishop Tutu of South Africa and Martin Luther King Jr. of USA for promoting civil rights and for working for justice, freedom and resistance against racial and other discriminatory practices across the world. Mandela used to say that India had sent Mohandas, but South Africa converted him into a Mahatma – a noble soul.

Anticopyright: Editorials and articles originated on TMS may be freely reprinted, disseminated, translated and used as background material, provided an acknowledgement and link to the source, TMS: Gandhi — Challenges and Learnings in South Africa, is included. Thank you.

2 Responses to “Gandhi — Challenges and Learnings in South Africa”