23 Apr 2018 – “Leave Syria, think about us!” and “No to Yemen! No to Lebanon and Hezbollah! Our lives for Iran!” are among graffiti sentiments scrawled across Tehran. The campaign is being led by students, unemployed workers, and other detractors of Iran’s Wali al Fique “Supreme Leader” rule and its much opposed foreign and monetary policies.

In the past year the Iranian Rial has lost one-third of its value. One-dollar cost 70 Rial at the time of the 1979 Islamic revolution, or 36,000 when Iran’s President Hassan Rouhani took office in 2013. Today one Dollar costs 60,000 Rial or higher with some currency exchanges and banks being forced to shut their doors to avoid long customer waits and chaotic lines.  According to a student friend studying at Tehran University, when customers visit Iranian banks and ask to exchange even 15 or 20 million Rials ($300 or $400) they are usually denied and asked to return in a week or more because the bank’s Dollar cash is depleted. To stem the mounting panic, Tehran announced this week an official exchange rate at 42,000 Rials to the dollar and threatening harsh punishments for anyone trying to exchange money at a different rate.

The pressure on the Rial continues to mount. This morning, 4/19/2018, an Iranian friend of this observer, Hamid, who works a few blocks from Tehran’s Grand Bazaar on Manouchehri Street, the heart of Iran’s informal (black) currency market, reported that discrete customers want to hoard ever more dollars as the Iranian Rial plummets. And they are ignoring government warnings not to. Hamid predicts the ‘illegal’ black market rate may reach 75,000 Rial to the Dollar within the coming few weeks, with an estimated inflation rate of a least 13% annually. In the past Hamid has advised me that some ‘friendly’ government officials come to him and his colleagues to ask their opinions on monetary issues because they trust their expertise more than they do some of the Central Bank economists. 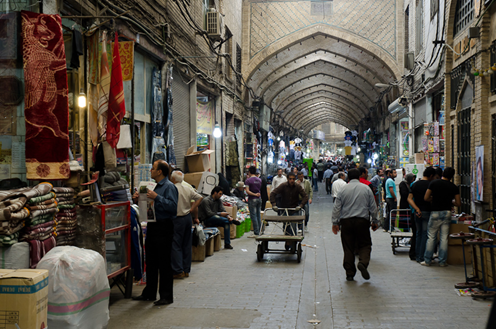 When asked by this observer about the causes of the apparent collapse of the Rial, Hamid insisted that at the top of his list:

“Our rulers are giving our money to Syria and Hezbollah when we need it to be spent in our own country.”

Some government security police fellows, apparently overhearing Hamid, discretely nodded in agreement and did not detain him, he later told me.

This past week, Iranian MP Mohammad Reza Pourebrahimi, the head of the Economic Committee in Iran’s Parliament, claimed in an interview with ISNA News Agency that the Iranian people transferred $30 billion out of the country in the last few months of the Persian calendar year, which ended on March 20. Among them, according to Hamid are plenty of government officials.

The immediate and perhaps longer-term future of the Rial, may rest significantly on whether Mike Pompeo and John Bolton decide to seek regime change. Both have advocated collapsing Iran’s economy to collapse its regime.

“The declared policy of the United States should be the overthrow of the mullahs’ regime in Tehran,”

“The behavior and the objectives of the regime are not going to change and, therefore, the only solution is to change the regime itself.“

Corruption, political infighting and fear of new sanctions are also factors in the Rial’s dramatic shrinkage. Even money earned from Iranian exports abroad is difficult to bring back into Iran these days given that international banks and foreign businesses are still quite wary of doing business with the country for fear of violating the increasingly complicated Kafkaesque U.S. led sanctions.

With the nomination of Mike Pompeo as Secretary of State and John Bolton appointed National Security Advisor, the prospect of evermore sanctions on Iran are significantly greater according to analysts at Citigroup Inc., Societe Generale SA, Royal Bank of Canada, and Mitsubishi UFJ Financial Group, among other who closely monitor Iran’s economy.

“Enemies outside of our borders, in various guises, are fueling this issue and are going to some effort to make conditions tougher for the people.”

One imagines that the gentleman is at least partially right.

In addition, some sanctions enforcement agents at the U.S. Treasury Department’s Office of Financial Assets Control (OFAC) are predicting that instability for the Islamic Republic will be intensified by its soon to be announced new sanctions. Other officials in President Hassan Rouhani’s government say there’s more than a economic rationale for the currency slide and have suggested conservative opponents are fueling it to discredit his administration to replace it with hardliners.

One reason this observer believes that the Trump Administration will not scrape the 2015 Joint Comprehensive Plan of Action (JCPOA) nuclear agreement with Iran next month is that Trump’s current team appear to confidently believe that they can achieve their US foreign policy goals by collapsing Iran’s economy while keeping the nuclear agreement— at least for now. US Treasury Secretary Steven Mnuchin, following a meeting with John Bolton recently announced that more US and EU sanctions on Iran will have a “very strong impact.”

Shortly thereafter, on 4/17/2018, European Union (EU) diplomats agreed that there is growing support among the 27 EU governments for more sanctions on Iran as they seek to persuade President Trump to stick by the 2015 nuclear deal between Tehran and six world powers. It is being reported from Luxemburg that the EU ministers were nearing agreement that sanctions action should be taken before the May 12 Trump deadline.

Iran Switches from Dollar to Euro for Official Reporting Currency

On 4/18/2018, Central bank governor Valiollah Seif announced that Iran will start reporting foreign currency amounts in euros rather than U.S. dollars, as part of the country’s effort to reduce its reliance on the U.S. currency due to political tension with Washington. It is not clear what practical affect this announcement will have.  Some predict that the public will ignore it. Tehran has been attempting for several years to replace the dollar with the Euro in foreign trade transactions, but the reality is that the country’s international trade is still largely conducted in dollars and ordinary Iranians use them for travel and savings.

Another pressing problem affecting the Rial is inflation. As is widely known, inflation is not a new problem in Iran, due in part to sanctions in recent years. But spiraling inflation is being felt by ordinary Iranians like never.  Iran’s Central Bank reported inflation to be at 22.2 percent, although some Iranian economists at both Tehran and Beheshti Universities claim this figure is seriously underestimated and ought not to be taken seriously. In one week alone, the price of chicken rose 30 percent and the price of vegetables nearly 100 percent. Prices are unstable, family budgets are being stretched as savings quickly disappear.

Also compounding the Rial’s cascading drop is mounting unemployment, soaring to an unofficial annual rate of 35 percent but nearly ten points higher according to other estimates. This is caused in large measure by factories and business having to lay off workers because they are unable to import needed goods and raw materials.

The popular revolts in the Middle East which began in 2011, Tunisia and Egypt being clear examples which instruct us, among other lessons, that there is a strong link between domestic stability, economic conditions and politics.  And, that citizens want their governments to focus on domestic needs rather than on foreign hegemonic projects or to be dragged into foreign sectarian conflicts or proxy wars.

As Iran’s confrontation with the Trump administration and U.S. regional allies heats up, its rulers are attempting to avert a worse currency crisis that would seriously add to their domestic woes. Yet Iran’s Wali al Fique and the conservative and anti-American Iranian Revolutionary Guard Corps, led by Qassim Soleimani, the branch of Iran’s military devoted to protecting its Islamic Republic system, are committed to dominating the Middle East.  Whatever the price paid by civilian populations, including Iran’s.

Qassim Soleimani is rumored to already be planning for the post Wali al Fique (Ali Khamenei) future and the establishment of a military government for not only Iran but for much of the region. Under the Al Quds leader’s command.

Anticopyright: Editorials and articles originated on TMS may be freely reprinted, disseminated, translated and used as background material, provided an acknowledgement and link to the source, TMS: Tehran’s Syria-Lebanon Colonization Project Is Collapsing Iran’s Rial as Iranians Hoard Dollars, is included. Thank you.