UN Security Council and the Rohingya: Yet another Charade? 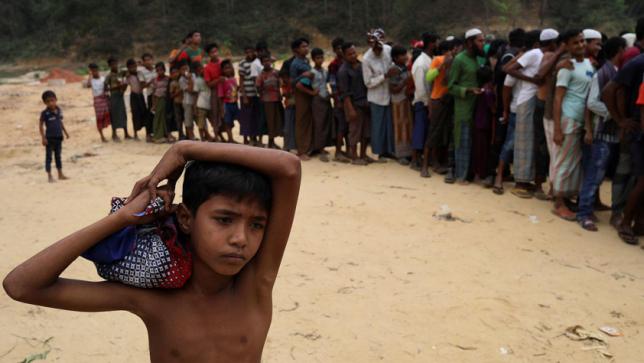 5 May 2018 – This week has experienced a flurry of diplomatic activities centring the Rohingya issue. Principal among those was what has been dubbed a “historic and highly unusual” visit of an important delegation of the UN Security Council (UNSC) to Bangladesh and Burma. Quite understandably, the visit drew attention of various quarters—states, international agencies, refugee and rights organisations, and most importantly, the hapless Rohingyas who have been “living in mud and shacks, with no hope and no future, no nation and no identity, no past and no future.”

During its visit, the delegation should have experienced two contrasting scenarios. On the one hand, in Kutupalong refugee camp and in the no-man’s land, they heard heart-wrenching testimonies of scores of survivors of the ongoing genocide—horrifying tales of mass murder, rape, torture, tossing of children in raging fire, torching of homes and hearths and systematic expulsion of an ethnic community whose identity and claims to citizenship have been meticulously dismantled over the last four decades by a state that has little regard for human rights, which the world body so fervently champions (at least in theory). The delegation also heard how a resource-poor and one of the most densely populated countries of the world, has lived up to its commitment to uphold the UN Charter and the lofty principles of the Universal Declaration of Human Rights in sheltering more than a million of refugees in distress. While UN diplomats heap massive praise on Bangladesh for its generosity and compassion, the organisation has so far failed to do the heavy-lifting in mobilising resources and garnering political will in addressing the root cause of Burma’s genocide.

On the other hand, the delegation met representatives of a regime that not only perpetrated perhaps the most gruesome crime against humanity this century has ever witnessed, in fulfilling its long-term genocidal agenda to free Arakan of ethnic Rohingyas, but also blatantly flouted the UN Charter and UDHR, and since the outbreak of current crisis in August 2017, repeatedly hoodwinked the security council that called for bringing an end to the current humanitarian crisis.

By now the authorities in Naypyidaw have established themselves as masters of the art of deception. Time and again they have promised the UNSC that effective action would be taken to create an enabling environment for the return of Rohingyas who are languishing in refugee settlements in Bangladesh. The delegation does not need reminding that till date not a single case of repatriation has taken place, save the staged repatriation of five Rohingya individuals out of a million who have been deported.

Befitting the adage “giving the devil its due”, the astute policy planners of Burma have been immensely successful in manipulating the UNSC. As early as September 2017, Burma informed the UNSC that it was prepared to start the repatriation at any time. The country’s National Security Advisor U Thaung Tun assured the UNSC that repatriation would take place by using the framework worked out jointly by Bangladesh and Burma in 1992. However, despite such a pledge, seven months have passed with no sign of repatriation. Under the memorandum of understanding with Bangladesh, Burma promised to stem the flow of refugees. In less than two weeks after signing the document, more than 100,000 Rohingyas crossed the border into Bangladesh. Anticipating the security council’s displeasure over its inaction, Naypyidaw was smart enough to cook up yet another scheme—the Union Enterprise Mechanism, with the purported aim to extend humanitarian assistance and resettlement of repatriated Rohingyas. The UNSC fell into the trap and in a presidential statement it “welcomed” the signing of the memorandum with Bangladesh and the formation of the Union Enterprise Mechanism.

Despite its explicit commitment to UNSC to cooperate with Bangladesh in expediting the repatriation process, in contrast to 1992 accord, Burma further tightened the eligibility criteria for the Rohingyas’ return and the verification process, thwarting any substantive effort for repatriation. In essence, it rebuffed the calls made by the UNSC in its two meetings held in September and November 2017.

The Burmese swindlers made best use of November 23 agreement with Bangladesh to stave off UNSC criticism for not progressing with repatriation. In a December UNSC meeting, Burma’s envoy to UN informed the council that repatriation would begin within the next two months. While the gullible world body appeared to have fallen for the hoax, true to its colour, a week before the commencement of repatriation (on 22 January), Burma demanded family-wise list of Rohingyas—a demand that Bangladesh subsequently complied with.

Even though the Burmese threw in a spanner in the latest effort of repatriation, its minister for international cooperation, Kyaw Tin, claimed that his country was ready to welcome refugees and held Bangladesh responsible for the delay. One hopes while assessing the sequence of stalled repatriation, eminent members of the UNSC delegation would bear in mind the subterfuges that the Burmese resorted to in undermining the repatriation effort.

In their meeting with the UNSC delegation, Rohingya refugees handed over a 13-point demand which they had earlier passed on to the visiting Burmese minister for social welfare. Included in the list were demands for restoration of their citizenship rights, bringing the perpetrators of heinous crimes to justice, ensuring international presence in Arakan, return of ancestral land confiscated by the authorities, payment of compensation for losses, presence of international media and human rights groups in Arakan, release of all political prisoners and closure of internally displaced camps. In other words, the refugee community demanded ensuring “protected return to protected homeland”—a plan that was floated in the February 2018 Rohingya conference in Berlin that has gained near unanimous acceptance of the global Rohingya community.

While briefing the press in Bangladesh, a member of the UNSC delegation noted “We don’t have any magic solution in the Security Council”. May he be reminded that maintaining “world peace and security” forms the core function of the Security Council and the council is duty bound to deliver on both counts? All states that are members of the council are meant to act on what is good for international community and not be guided by their own selfish political, strategic and economic interests. Any departure from this would tantamount to violation of the UN Charter. Rohingyas do not want UNSC delegation to whisk around a magic wand in its search for solution. They want the UNSC to adhere to the UN Charter, in word and spirit, to ensure their protected return to protected homeland and bring the perpetrators to justice.

The influential UK permanent representative Karen Pierce observed “…it is not the Security Council’s fault that there is a crisis.” Well, not quite so. For decades, the Burmese state has pursued a policy of annihilation of ethnic Rohingya considered as “the most persecuted minority in the world” by the United Nations. As the community was gradually stripped of their citizenship and other associated rights, being subjected to methodical discrimination and unleashing of spikes of violence periodically triggering massive refugee flows, the international community opted to look the other way. Rohingyas were also considered a dispensable lot as western countries raced to exploit the resources and engage in trade with the genocidal regime under the rubric of supporting democratic transition. Every veto wielder in the security council is guilty of complicity in the four decade long slow genocide. The difference in complicity among them is in degree and not in kind.

Over the last four decades, the UN has failed to stop genocide and other atrocious crimes that led to death and displacement of millions (Rwanda, Bosnia, Sudan and now Burma). The onus lies on the permanent members of the security council to make the institution functional and relevant. The Rohingya case provides an opportunity for the UN’s redemption. Ensuring protected return to protected homeland and bringing the perpetrators to justice is the first step in that direction.

While members of the UNSC delegation return to New York and deliberate on their whirlwind mission, one hopes they bear in mind that for the first time in the history of the august body that is tasked to maintain global peace and security, they had the rare opportunity of visiting the sites where genocide was perpetrated by a murderous regime.

One Response to “UN Security Council and the Rohingya: Yet another Charade?”