On Purpose, in Kabul

26 Jun 2018 – Writing this week for the Chicago Tribune, Steve Chapman called a U.S. Government report on the war in Afghanistan “a chronicle of futility.” “The Special Inspector General for Afghanistan Reconstruction” report says the U.S. spent large sums “in search of quick gains” in regional stabilization – but these instead “exacerbated conflicts, enabled corruption and bolstered support for insurgents.”

“In short,” says Chapman, the U.S. government “made things worse rather than better.”

Gains, meanwhile, have certainly been made by weapon manufacturers. On average, during Trump’s first year in office, the Pentagon dropped 121 bombs per day on Afghanistan. The total number of weapons – missiles, bombs – deployed in Afghanistan by manned and remotely piloted aircraft through May this year is estimated at 2,339.

War profiteers deliver hellish realities and futile prospects, but the Afghan Peace Volunteers have not given up on bettering their country. In recent visits to Kabul, we’ve listened as they consider the longer-term question of how peace can come to an economically devastated country where employment by various warlords, including the U.S. and Afghan militaries, is many families’ only way to put bread on the table. Hakim, who mentors the APVs, assures us that a lasting peace must involve the creation of jobs and incomes with a hope of sustaining community. Inspired by Mohandas Gandhi’s calls for self-sufficiency, and the example of his Pashtun ally, Badshah Khan, they resist war by fostering education and creating local cooperatives.

Miriam is a student in the APVs’ “Street Kids’ School,” which prepares child laborers to pursue schooling while helping their families stay afloat with monthly rations of rice and oil. Sitting with me in the garden of the APVs’ Borderfree Center, her widowed mother, Gul Bek told me of the hardships she faces as a single mother of five.

Each month, she struggles to pay for water, rent, food, and fuel. Some years ago, a company installed a water pipeline leading to her home, but every month a representative from the company comes to collect 700 – 800 Afghanis (about $10.00) in payment for the family’s water consumption. An impoverished household – even free of war’s ravages – can’t easily spare $10. She tries hard to conserve. “But we must have water!” says Gul Bek. “We need it to clean, to cook, to do laundry.” She knows how important hygiene is, but she doesn’t dare go over her budget for water. Gul Bek fears she might be evicted if she can’t manage rent. Would she then go to a refugee camp in Kabul? She shakes her head. I asked if the government helps at all. “They know nothing about how we live,” she said. “At the beginning of Ramadan, we couldn’t even have bread. We had no flour.” Her two eldest sons, age 19 and 14, are beginning to learn tailoring skills and they attend school part time. I asked if she ever considers allowing them to join the military or the police to earn something closer to a living wage. She was adamant. After working so hard to raise these sons, she doesn’t want to lose them. She won’t allow them to carry guns. 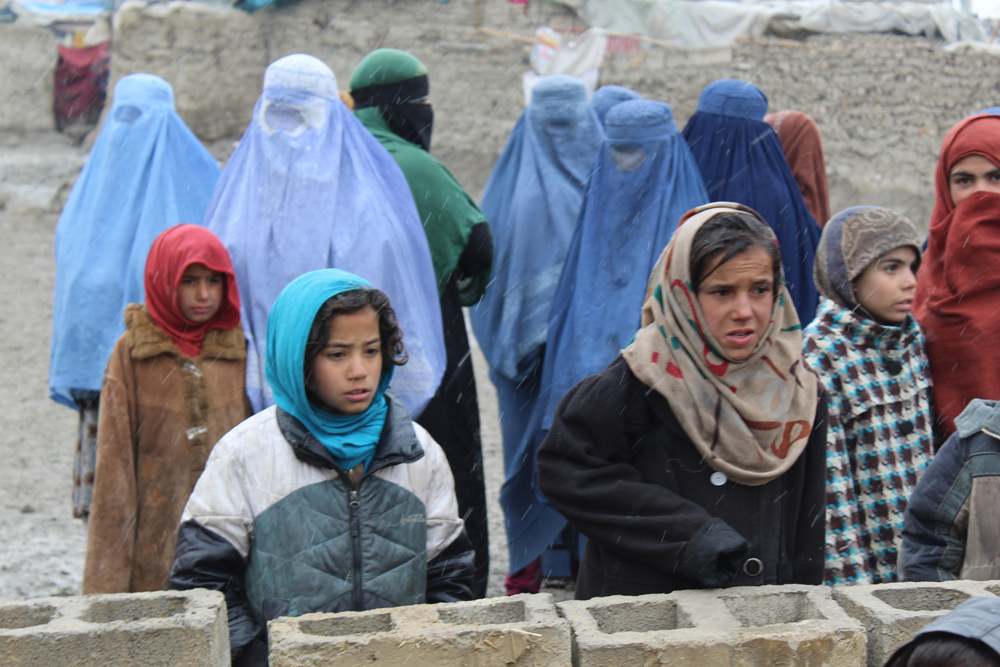 Girls and mothers, waiting for their duvets, in Kabul. Photo credit: Dr. Hakim

Visiting a refugee camp several days later, I could understand her horror of moving into a camp. The camps are overcrowded, muddy, and dangerously unsanitary. An elder from the camp, Haji Jool, was entrusted with the keys to a control room for a well that two NGOs recently installed. On that day, the valves weren’t functioning. 200 of the 700 families in the camp depend on that well for water. I looked at the worried faces of women who had been waiting, since early morning, to collect water. What would they do? Haji Jool told me that most of the families had come from rural areas. They fled their homes because of war or because they lacked water. Kabul’s battered infrastructure, in desperate need of U.S. reparations for fifteen years of war, simply can’t sustain people.

Our APV friends, recognizing the need to create jobs and incomes, have begun forging ahead with impressive work to establish cooperatives. In early June, they initiated a shoemaking cooperative, led by two young men, Hussein and Hosham, who’ve already been trained and have taught their skills to Noorullah. They named their store “Unique.” A carpentry co-op will soon be up and running.

The APV are grateful to the many internationals who, over the past six winters, have assisted their annual “Duvet Project” to bring much-needed blankets to Kabul residents lacking protection from harsh winter weather. The “Duvet Project” has donated winter blankets to some 9,000 destitute families in Kabul and has offered a winter income to as many as 360 seamstresses. Yet, the APV have grappled with a persistent plea from seamstresses who, while appreciative of the seasonal project, express their acute need for an income throughout the year.

This year, APV are forming a seamstresses’ cooperative which will manufacture clothing year-round for inexpensive local sale and will also distribute duvets.

The U.S. exerts massive power from the skies of Afghanistan, raining down hellfire in ever greater quantities. Its Security Zone and its military bases, within and near Kabul, help to drain the local water table faster than wells can be dug. It persistently causes hatred and harm. Meanwhile, it might sound like a cliché, but in imagining a better world our young friends are helping to build one. With sustainable projects to support the neediest, they embrace Gul Bek’s refusal to cooperate with war. Their simple, small actions do strengthen Kabul.  They give themselves over to compassion, to strengthening their neighbors. They plant the seeds that may or may not grow a forest there – they use, rather than wasting, what power they have. They aren’t rewarded with the titanic achievement of having shaped and ruined a country, but instead with purposeful intent to stop the vicious cycle of war and resist the cruel hierarchies attempting to prevail. We at Voices are grateful for the chance, with them, to reject despair. In supporting their projects, we can make reparations, however small, for the persistent futility of war.

Anticopyright: Editorials and articles originated on TMS may be freely reprinted, disseminated, translated and used as background material, provided an acknowledgement and link to the source, TMS: On Purpose, in Kabul, is included. Thank you.