V. S. Naipaul, the Nobel winning author who just died, was, like so many people, an enigma, at least in his writing. Lauded for his prose style and exquisite way with words, he was seriously criticized for his demeaning of Islam, women, Africans, and others in post-colonial countries, including the Caribbean from whence he came. Such criticism was amply justified.  He seems also to have been bigoted and irascible personally, while charming when he wished.  A strange character, many of whose political and cultural views I find abhorrent.

Nevertheless, if one only looked for beauty and truth in writers whose politics one agreed with, one would miss out on a lot.  For sometimes, despite themselves, writers pen words that come from a place where art and inspiration and personal anguish subvert their worst inclinations.  As Leonard Cohen has written: “There’s a crack in everything, that’s how the light gets in.”  This is true for Naipaul. 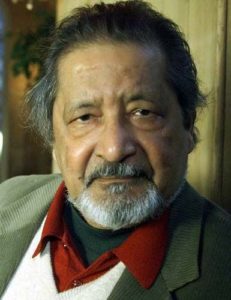 He once said that fiction never lies, and while this may or may not be true, it is true that writers whose politics one may find repulsive can also, despite their conscious intentions, write books that glow with an extraordinary prose luminescence that mesmerizes and reveals deep insights.  This is the case with Naipaul’s The Enigma of Arrival, a work he calls a novel but that reads like an autobiography.  While his novel, A House for Mr Biswas, is considered his finest work and the book that made him famous, I think The Enigma of Arrival is a masterpiece. Deeply melancholic, it allows Naipaul’s shadow side to reveal truths that go far beyond the man himself.

The prototype for all journeys is life itself.  This being so, it follows that every destination prefigures death and of necessity poses an enigma.  For although one travels in part to arrive, at the same time one’s anticipation of arrival harbors the fear of cessation.  It is because every elsewhere contains the worm of death that some people never embark on the voyage, while others go from “place” to “place” in search of paradise.

Naipaul cast anchor at the age of 18, leaving Trinidad for a scholarship at Oxford in England where – aside from numerous travels, especially in the Third World – he lived most of his life.  Setting out with a wish not “so much to go to Oxford as a wish to get out of Trinidad and see the great world and make myself a writer,” this young man of Indian ancestry, a child of crumbling colonialism, took with him a temperament “to see the possibility, the certainty, of ruin, even at the moment of creation.”  In other words, a true writer’s temperament, the sensibility of one who knows intuitively that the journey into the unknown never ends; “that,” as he would gradually learn, “to be a writer was not (as I had imagined) a state – of competence, or achievement, or fame, or content – at which one arrived and where one stayed…It was always necessary to pick oneself up and start again.”

Outwardly at least, the story Naipaul tells in The Enigma of Arrival is impersonal, slow-paced and almost boring in its progression (much like ordinary life).  After twenty years in England – “savorless and much of it mean” – having failed in his effort to leave England with its history of colonial exploitation and become “a free man,” his spirit broken and his nerves shattered, he settles in a “cottage of a half-neglected estate, an estate full of reminders of its Edwardian past” on the Salisbury Plain near Stonehenge.

There, in a part of England renowned for its historical and religious past – “a vast sacred burial ground” – he finds in his solitude and daily walks “a second chance, a new life, richer and fuller than any I had had anywhere else.”  He learns to see nature with new eyes and to take solace in “the child’s dream of a safe house in the wood.”  In the garden of a local man – “Jack’s Garden,” the book’s opening section – he comes to see a celebration of “something like religion.”  Jack, in his way of life, “had sensed that life and man were the true mysteries.”

But Jack dies; the estate’s slow decay precipitates; the deadly sounds from the nearby army training grounds echo in the author’s ears; a fellow writer, one who suffered, like Naipaul, from a “too-literary approach to his experience,” kills himself; a woman is murdered.  In short, into his natural paradise, albeit a ruinous and derelict one (its appeal for Naipaul, the unanchored, dispossessed outsider), the snake of death and destruction crawls.  Having stayed too long in this place that he loved, Naipaul falls ill; his “second childhood of seeing and learning” comes to an end.  He moves, but just a few miles away, to a few old agricultural cottages that he converts into a house.  A mistake, he later realizes.  “I should have made a clean break, gone elsewhere.”

But where?  For at the heart of his pilgrimage is an image from which his book’s title derives.  It is a painting by Giorgio de Chirico, “The Enigma of Arrival,” so named by the poet Apollinaire.  It is a scene of a wharf; in the background rises the mast of an antique sailing ship; in the foreground stand two figures, muffled and mysterious.  In his fascination with this painting, Naipaul imagined a story of a man who arrived at this port, enters the city, has encounters and adventures, but gradually has the feeling that he is getting nowhere.  In his lostness and panic, he miraculously finds his way back to the quayside in order to escape.

But to where?  And how?  In the concluding section of this moving book – “The Ceremony of Farewell” – Naipaul’s sister dies of a brain hemorrhage.  He returns to Trinidad to be with his family.  During a Hindu ceremony for his sister, her husband says to the Hindu pundit conducting the rites, “I would like to see her again.”  There were tears in his eyes.  “The pundit didn’t give a straight reply….Sati’s son asked, ‘Will she come back?’  Sati’s husband asked, ‘Will we be together again?’  The pundit said, ‘But you wouldn’t know it is her.’”

“It was,” writes Naipaul, “the pundit’s interpretation of the idea of reincarnation.  And it was no comfort at all.  It reduced Sati’s husband to despair.”

And with that recollected dialogue, with its abstract commentary on everyone’s last port of call, Naipaul reveals the anguish at the heart of his journey.  “There was no ship of antique shape now to take us back,” he sadly notes.  The old sanctities, the sacred world had vanished.  He concludes:

Every generation now was to take us further away from those sanctities.  But we remade the world for ourselves; every generation does that, as we found when we came together for the death of this sister and felt the need to honor and remember.  It forced us to look on death.  It forced me to face the death I had been contemplating at night, in my sleep; it fitted a real grief where melancholy had created a vacancy, as if to prepare me for the moment.  It showed me life and man as the mystery, the true religion of men, the grief and the glory.

And it brought Naipaul to begin writing this book and to discover in the end that one arrives at oneself or not at all.  Whether he did or not, no one can say.  Is he still sailing?  No one can say?  Has he arrived?  No one can say.  But he left us with this deeply evocative meditation on life and death in the modern world, a world in which, despite science and technology, the old questions remain to haunt us – the enigmas.

Edward Curtin is a writer whose work has appeared widely. He is a member of the TRANSCEND Network for Peace Development Environment and teaches sociology at Massachusetts College of Liberal Arts. His website is http://edwardcurtin.com/

Anticopyright: Editorials and articles originated on TMS may be freely reprinted, disseminated, translated and used as background material, provided an acknowledgement and link to the source, TMS: A Writer’s Last Port of Call: V.S. Naipaul, is included. Thank you.