After nearly 60 years of lighting homes halogens will be replaced with more energy efficient LEDs. 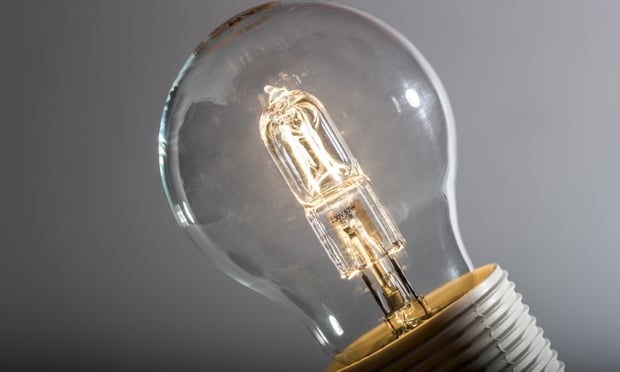 Switching to LEDs has been estimated to save consumers up to €124 a year. Photograph: imageBroker/Rex/Shutterstock

23 Aug 2018 – After nearly 60 years of brightening our homes and streets, halogen lightbulbs will finally be banned across Europe on 1 September.

The lights will dim gradually for halogen. Remaining stocks may still be sold, and capsules, linear and low voltage incandescents used in oven lights will be exempted. But a continent-wide switchover to light-emitting diodes (LEDs) is underway that will slash emissions and energy bills, according to industry, campaigners and experts.

LEDs consume one-fifth of the energy of halogen bulbs and their phase-out will prevent more than 15m tonnes of carbon emissions a year, an amount equal to Portugal’s annual electricity usage.

Philips, the lighting manufacturer estimates consumer savings of up to £112 (€124) a year from the switchover because LEDs last much longer than halogens and use far less power.

But that has not stopped a perennial tabloid crusade against interference from Brussels – and the revival of timeworn Brexiteer campaign themes.

Jonathan Bullock, Ukip’s energy spokesman in the European parliament told the Guardian: “The EU’s attempt to ban halogen bulbs is wrong because consumers will suffer financially and it’s always the poorest who suffer most from these kinds of policies.”

“Customers should have the freedom of choice in bulbs and it shouldn’t be imposed by the EU.”

However, with incandescent bans spreading from California to Canberra, any post-Brexit revival might depend on inefficient Chinese bulbs – and these could add £90 to average energy bills, studies indicate.

At present, halogen bulbs are often individually cheaper than LEDs but extrapolating cost savings from that is “a false economy” according to Stewart Muir, a product manager at the Energy Savings Trust.

Ukip’s numbers “just don’t add up,” he said. “A halogen bulb may be cheaper to buy in the first place but the electricity costs will be much more expensive, whereas an LED bulb will pay for itself within a year.”

Halogen bulbs also last for just two years on average, compared to LEDs which have a 15-20 year life expectancy, he said.

The average British home has about 10 halogen lamps and uses each lightbulb for around three hours a day, according to government figures from 2012.

The emissions cost is staggering. Buildings account for about 40% of our energy consumption – and lighting currently accounts for around 15% of that. That gives it a carbon footprint higher than aviation and shipping combined.

Eliot Whittington, the director of the Prince of Wales’s corporate leaders group, which campaigns on the issue, said: “The science is clear. We can’t allow the human costs of climate change to reach the levels they will, if we fail to act. You ban things that threaten public safety and the wasteful use of energy is dangerous for us all in the end.”