The Global War on Terror – Another Predictable Fiasco Turns 17 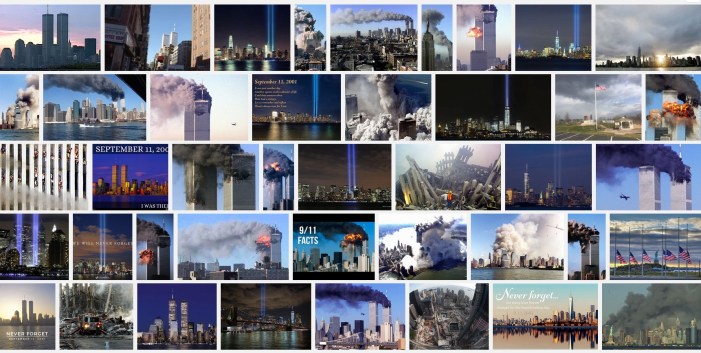 11 Sep 2018 – Today marks the 17th anniversary of what could be called the most counter-productive, if not stupid, war in modern history: The Global War On Terror, GWOT.

Today that war is much much more dangerous to the world and its future than the terrorists it allegedly aims to hunt down. And it has caused thousands of times more suffering, death and destruction than September 11 did.

As you’ll see below – the image above and below – the U.S. has been able to market itself as the innocent victim – which it isn’t. While countries and peoples who have been innocent victims and to a much larger extent do not have similar resources and control over the media narratives told worldwide.

Right! – these wars were not branded to create sympathy for victims. On the contrary.

The war on terror was wrong from Day One. It’s not a war on terrorism but on terrorists which is as smart as trying to fight all diseases by killing all patients.

And it’s a war fought without any consideration of the one big question: Why did they do it and why do they do it? Media and politics only asking: Who did it? How was it done? Where? How to respond? Never the Why question? Because that question would raise to issues: Could they have a point?  (not defending their methods but understanding their motivations) and did we ourselves do anything to provoke such feeling in other peoples and religions?

Without an intelligent, comprehensive diagnosis of 9/11, it could only go wrong. And it has. And it will.

The next problem was that ‘terrorism’ was suddenly defined by states as anything non-state that threatens society and states. Governments and the UN (which consists of them) conveniently omitted terrorism as a term for what states do and have done on a regular basis and on a much larger scale. Such as the nuclear balance of terror, a term that was deliberately taken out of the political vocabulary because it indicated and important truth: that states practice terror.

About 400 people were killed annually and worldwide before 9/11 according to US State Department statistics – which, by the way, was discontinued stopped in 2004 when figures soared after the War On Terror gained momentum.

However, according to the 2015 Global Terror Index – the number is now 32,000 – and the far majority killed outside the West. So, the problem has increased exactly 80 times(!)

And the Western leaders who continue this war have no idea about how to stop it or do something more productive and intelligent. Primitive tit-for-tat and disproportional responses has substituted what was once called statesmanship.

And it was predictable that such an almost anti-intellectual approach would be a fiasco!

Many both inside and outside the U.S. came up with different diagnoses, prognoses and proposals for responses to the cruel attacks on Washington and New York. So did TFF Associates. Below you’ll find just a selection of articles in English (we also wrote in Scandinavian languages and spoke in radio and television interviews) – posted within the first three months after 9/11 and then later).

We make them available for those who care about the world, about terrorism and for those who also have the moral courage to ask: How come that small independent organisations often predict the future much better than huge “intelligence” agencies, state research institutes and private so-called think tanks with multi-billion dollar budgets?

The answer is found in the question: independence, free exploration and free thinking. The opposite of the group think and political correctness that characterise most state- and corporate-financed research.

And why did – and do – media listen to those who advocated a violent response and to the masters of successive wars on Afghanistan or “10/7″, on Iraq or “3/20″ and on Libya and Syria – and drone warfare?

Further, why did virtually none of the larger media listen to any of those of us who argued in favour of a political self-reflection and a response to 9/11 in accordance with international law, ethics and the common good worldwide?

And why are all the leaders of the global War On Terror that has brought unspeakable suffering to the world and killed so many innocent people still at large?

Finally an illustration of the 9/11 propaganda machine that – mistakenly – is supposed to be helpful to the West:

The picture on top of this article is what you get by using a search engine for “September 11 – images”.

Below is what you get when you search “October 7 – images” – the day the US started the war on Afghanistan.

Clearly, you are supposed to remember one and forget the other – and so too the wars on and destruction of Iraq, Libya and Syria. No sympathy for the victims there – of our wars – and no empathy with the asylum seekers and the refugees from these regions. 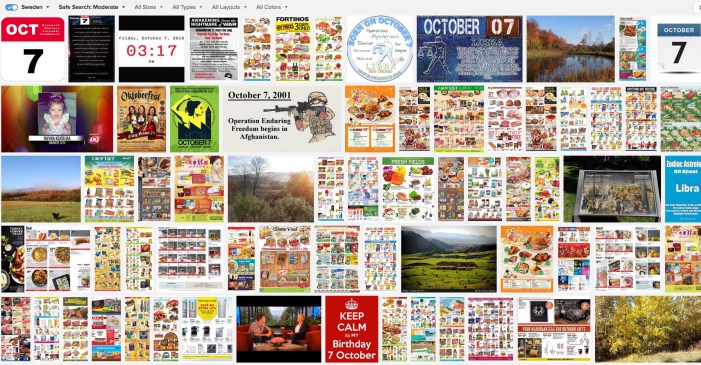 Here is the selection of relevant TFF articles over the years:

Peter Jarman, September 17, 2001
The terrorist attacks in the USA. A personal view

Jonathan Power, September 20, 2001
Is it possible for America to say ‘Sorry’?

Radmila Nakarada with Miroslav Pejulic, October 1, 2001
The tragedy of a tragedy – global terrorism and repressive globalisation

Jan Oberg, May 3, 2002
Three minutes silence for the dead in Afghanistan and three other peacemaking suggestions

TFF’s Associates publish about 200 analytical articles per year, so literally thousands since September 12, 2001 – on 9/11 itself and the War On Terror, on Afghanistan, Iraq, Libya, Syria, drone wars etc. – all available at our two sites – TFF’s Old homepage and TFF’s former until 2018.

We continue addressing these issue here at The Transnational, our homepage-magazine that was launched on January 1, 2018.

The Global War On Terror is self-defeating for the West

One – increasingly important – result of this war is the systematic undermining of democracy, human rights, freedom of expression etc. in the Western world – as well as an increase in all types of surveillance, monitoring and intrusions into our private lives and misuse of fearology as a main tool against one’s own population.

Scared people stop participating in their society and their democracy and turn to info-tainment and escapism.

Western taxpayers have financed this war now for 17 years. The only thing they got is a much dangerous and unfree world.

Perhaps it is time to do a mass boycott of tax money that goes to war in your country? And let those who want to continue the War on Terror do so on the basis of voluntary contributions via crowd-funding?

In the long run, the War On Terror is likely to be more self- than other-defeating.

We are living in what Chris Hedges has recently called the new illiteracy, the post-literate society in which large segments of citizen can no longer distinguish between lies and truth. It won’t make it easier to stop the madness of the War On Terror – or the Western build-up to war with Russia for that matter – which both Stephen Cohen and Michael Klare and even former MI-6 agent, Alistair Crooke believe the world could be heading for thanks predominantly to the over-militarization of NATO countries and their hubris policies.

And why do I mention the new Cold War here at the end?

Because there is a connection. After the Soviet invasion of Afghanistan in 1979, president Carter’s national security adviser Zbiegniew Brzezinski, got the great idea that the US should supply Stringer missiles to jihadists there and thus help them fight the Russians. So there is a connection at the beginning and today: the ongoing support by the West to some terrorist groups either directly or via allies such as Saudi Arabia, the Gulf States and Turkey.

To put it crudely:  that’s what Syria is also about and that is why there is only one Western mainstream narrative about that conflict and why that narrative has very very little to do with the much more complex reality. The West de facto supports terrorists – with propaganda, regime change policies, arms and ammunition, training etc. – under the narrative of fighting them.

One must therefore wonder how much of the War On Terror is actually a war on “our own” and what purpose, if any, that could possibly serve.

One of course would be to always conveniently have at hand a pretext for new bombings, occupations, secret forces and regime changes somewhere – in short a terrorism perpetuum mobile feeding on itself.

At least, that is, until the US Empire has vanished, NATO been closed down and the West accommodated to being a partner among equals in a future, more balanced and peaceful multi-polar world order.

May that day come sooner rather than later.

What about 3 minutes of silence for the victims of the Global War On Terror?

In short, the policies in the wake of 9/11 is the problem that we should address.

It’s time we wake up and see through 9/11, see through the fearological bluff it has been misused to create. The “re-action” to 9/11 is mega-terrorism and more harmful to the world – all of us – than whatever happened on 9/11 and whoever did it.

The event on 9/11 caused many to observe 3 minutes of silence. How many hours would we need in remembrance of the people killed in Afghanistan, Iraq, Libya and Syria and other places for, literally, not one good reason?