Mahatma Gandhi — An Icon of Truth, Amity, Nonviolence and Cleanliness

As is common knowledge, 2 October is the birth anniversary of Mahatma Gandhi. He was born in Porbandar in Gujarat in 1869. The Indian government has already started various events such as lecture series, exhibitions and working on projects of cleanliness and sanitation — aspects that will continue at least till 2019, to celebrate the 150th year of Gandhi’s birth.

Gandhi is undoubtedly a pioneer in the belief and promotion of nonviolence; his anniversary is also celebrated as the international day of Nonviolence. Apart from his emphasis on avoiding violence under all situations — be it in action, or words or even thought, Gandhi laid emphasis on truth, inter religious amity and brotherhood. Although he proclaimed himself a staunch follower of Hindu faith, he did not have any antipathy or suspicion of other religions. A famous bhajan (religious song) ‘Raghupati Raghav Raja Ram.  Ishwar Allah tero nam…’ that he used to sing frequently, paid respect to both the Hindu and Muslim Gods. 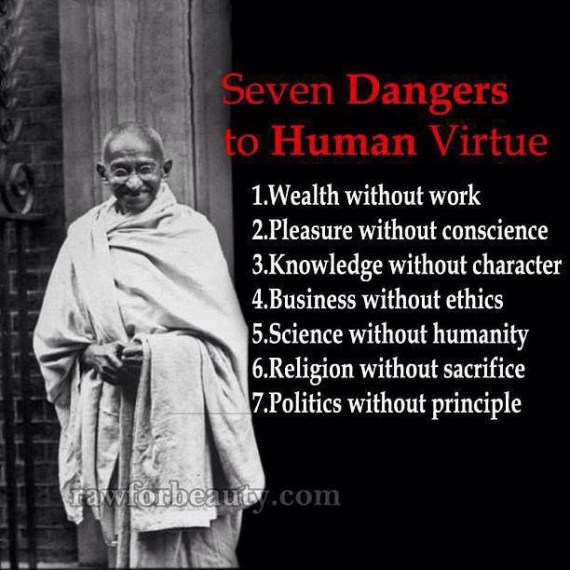 Almost a century back he firmly believed in not exploiting nature due to our life styles, for the protection and   sustenance of our planet Earth. He used to say that the Earth has enough for our needs but not enough for our greed. This issue has gained worldwide attention since we are witnessing the adverse impacts of pollution, global warming, climate change resulting in rising sea levels, unexpected weather conditions, floods, hurricanes and disease.

In addition to these concerns, Gandhi firmly believed in cleanliness and sanitation for the health and dignity of millions of poor deprived peoples all over the world. In fact, he, his wife and his followers always worked to keep their homes and the ashrams that they lived in, clean and tidy.

Cleanliness is of course associated with environmental issues but it has other dimensions related to the safety, sanctity, dignity of people especially women and young girls. In India, there is an acute shortage of toilets at home especially in rural areas that forces people to defecate in the open. Many unsavoury incidents have taken place that are cruel and create a fear psychosis, especially among girls, including a feeling of shame and occurrence of some brutal incidents of rape and other forms of violence.

Even in schools, there is a shortage of toilets; even if there are toilets they are not clean which again results in adolescent girls absenting themselves or even altogether leaving schools and abandoning education. Absence of toilets also results in defiling the towns and villages, causing disease and affecting people in several adverse ways.

The Indian government is active in construction of toilets and encouraging the private corporate sector towards this objective. Several NGOs are also helping in the mammoth task of construction and maintenance of millions of toilets in homes, public places, in schools, etc.

This mission has been promoted as a follow-up of Gandhi’s belief in cleanliness and sanitation. It is being called ‘Swatchta Abhiyan ‘ (Mission cleanliness and sanitation — a drive for health and dignity). It is beneficial not only for individuals but also for maintenance of a clean environment. It does not just mean building of toilets but also refers to keeping the environment — roads, streets, water bodies clean and free from garbage such as plastic and other non degradable items. Many people, especially tourists are shocked while traveling in trains to see people defecating along the railway tracks and garbage scattered all over.

These concerns are genuine and call for urgent remedial action. Gandhi’s standing and his relevance even 70 years after his death in January 1948, have given the Mission Cleanliness and Sanitation a boost and encouragement.

It is hoped that by the time that we come to Gandhi’s 150th anniversary, our country is sanitary, cleaner and greener and people especially the marginalised sections feel a sense of security and dignity in their lives. Gandhi will always remain an icon of truth, amity, nonviolence and cleanliness.

I would also like to mention that the UN Secretary General Antonio Guterres is in India on October 3 for the meeting of the International Solar Alliance (ISA). He awarded to Indian Prime Minister Narendra Modi  the ‘UN Champion of the Earth Award’ for his unflinching efforts of meeting the challenge of Climate Change which has benefits not only for India but the entire world.

Anticopyright: Editorials and articles originated on TMS may be freely reprinted, disseminated, translated and used as background material, provided an acknowledgement and link to the source, TMS: Mahatma Gandhi — An Icon of Truth, Amity, Nonviolence and Cleanliness, is included. Thank you.