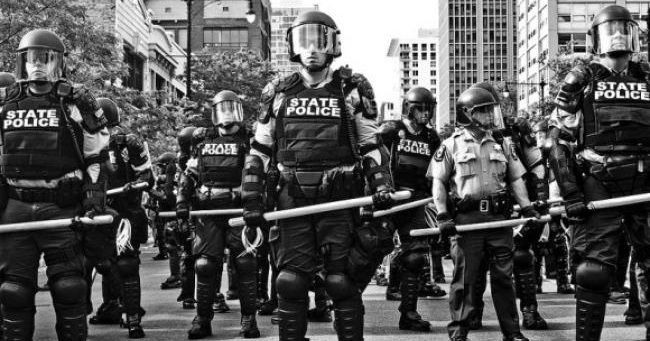 12 Dec 2018 – A global police state is emerging as capitalism descends into an unprecedented crisis, given the extent of ecological degradation and social deterioration, and the sheer scale of the means of violence deployed around the world.

The turn towards a global police state is structurally rooted in capitalism’s Achilles heel: over-accumulation. Polarization of income and wealth is endemic to capitalism. The capitalist class appropriates as profit much of the wealth society collectively produces, so that as the system churns out wealth, the mass of workers cannot actually consume it. The gap grows between what’s produced and what the market can absorb. If capitalists can’t sell the products of their plantations, factories, and offices, they can’t profit. Unchecked, growing inequality results in stagnation, depression, social upheaval and war.

The richest 1% in 2016 controlled over 1/2 the world’s wealth; 20% controlled 95% of that wealth, while the remaining 4/5 of humanity lived on 5%. This concentration of wealth and the impoverishment and dispossession of the majority means that the transnational capitalist class (TCC) can’t find outlets to unload the surplus it has accumulated. The Great Recession of 2008 marked the onset of a deep structural crisis of over-accumulation. The TCC has turned to financial speculation, together with state-organized militarized repressive accumulation, to sustain global profits in the face of over-accumulation.

As one speculative sector dries up, the TCC turns to another to unload its surplus capital and product. The latest outlet seems to be Information Technology along with Bitcoin and other crypto-currencies.

The gap between the production economy and “fictitious capital” – money in the finance sector with no base in productive activity – has reached mind-boggling levels. Gross world product, the total value of goods and services, was $75 trillion in 2015, whereas currency speculation alone amounted to $5.3 trillion a day and the global derivatives market was estimated at $1.2 quadrillion.

But financial speculation is a temporary fix. It can’t resolve the structural problem of over-accumulation as the transfer of wealth from workers to the TCC constricts the market. Data from 2010 showed that US companies were sitting on $1.8 trillion in un-invested cash. Corporate profits have been at near record highs while corporate investment declined.

The TCC has acquired a vested interest in war, conflict, and repression as a means of accumulation. As war and repression become privatized, capitalist groups shift the political, social, and ideological climate towards generating conflict and expanding systems of war, repression, surveillance and social control for the sake of private profit.
The so-called wars on drugs and terrorism, the undeclared wars on immigrants, refugees and gangs (and poor, dark-skinned, and working-class youth more generally), the construction of border walls, immigrant detention centers, prison-industrial complexes, systems of mass surveillance, and the spread of private security guard and mercenary companies, have all become major sources of profit-making.

The day after Trump’s victory, the stock price of Corrections Corporation of America, largest for-profit immigrant detention and prison company in the US, soared 40% 9and Trump immediately reversed the decision to end privatized detention centers).

The Pentagon budget increased 91% from 1998-2011. From 2001-2011 military industry profits nearly quadrupled. Total defense outlays (military, intelligence agencies, Homeland Security) grew from $1.4 to $2.03 trillion between 2006 and 2015, and have increased with bipartisan approval under Trump.

Simultaneously, the war on drugs constitutes the axis around which a program of militarized accumulation and capitalist globalization revolves in Mexico, Colombia, and elsewhere. “The war on drugs is a long-term fix to capitalism’s woes,” observes journalist Dawn Paley, “combining terror with policy-making in a …neoliberal mix, cracking open …territories once unavailable to globalized capitalism.”

Crucial to the global police state is the development of digitalization,. The tech sector is at the cutting edge of capitalist globalization. Computer technology introduced in the ’80s provided the original technological basis for globalization. Now, the “4th industrial revolution” is based on robotics, 3-D printing, the Internet of Things, artificial intelligence (AI) and machine learning, bio- and nano-technology, quantum and cloud computing, new forms of energy storage, and autonomous vehicles, all of which eliminate the need for vast numbers of workers. 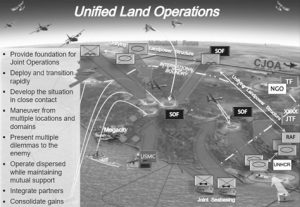 The reconfiguration of space facilitated by digitalization is captured by the notion of global green zoning. “Green zone” refers to the nearly impenetrable area in central Baghdad that US occupation forces established after invading Iraq. Urban areas around the world are now green zoned by gentrification, surveillance and state and private violence. Inside the world’s green zones, elites and privileged middle and professional strata access privatized social services, consumption and entertainment. They work and communicate through internet and satellite under the protection of soldiers, police and private security forces.

Between green zones and open war zones are prison industrial complexes, immigrant and refugee repression and control systems, criminalization of outcast communities, social cleansing of the poor, and capitalist schooling. The media and cultural apparatus of the corporate economy aim to colonize the mind – to undermine the ability to think critically outside the dominant worldview. A neo-fascist culture emerges through militarism, misogyny, toxic masculinity and racism.
Absent a change of course forced on the system by mass mobilization and popular struggle from below, mounting crisis will cement the digital economy into a global police state.

Fascism is a particular response to capitalist crisis. Trumpism in the US, BREXIT in the UK, the influence of neo-fascist parties around the world represent a far-right response to the crisis of global capitalism.

21st century fascism shares a number of features with its 20th century predecessor but there are also key differences. Fascism in the 20th century involved the fusion of reactionary political power with national capital. 21st century fascism involves the fusion of transnational capital with reactionary repressive political power. In both cases, however, fascism is a response to deep structural crises of capitalism.

21st century fascist projects seek to organize a mass base among privileged sectors of the global working class, such as white workers in the Global North and middle layers in the Global South, that are experiencing insecurity and downward mobility. The project hinges on the psycho-social mechanism of displacing fear caused by acute capitalist crisis towards scapegoat communities, such as Black people, immigrant workers, Muslims and refugees. Far-right forces do so through xenophobic ideologies that involve race/culture supremacy, an idealized mythical past, and a militarist, masculinist culture that normalizes or glamorizes war and domination.

The ideology of 21st century fascism rests on irrationality – an emotive promise to deliver security and restore stability, without regard to facts. The Trump regime’s public discourse of populist nationalism bore no relation to its actual policies. Trumponomics involved deregulation, slashing social spending, boosting privatization, tax breaks to corporations and the super-rich, and expanding subsidies to capital – neo-liberalism on steroids.

Trump was a charismatic figure able to galvanize disparate neo-fascist forces, from white supremacists, militia, neo-Nazis and Klansmen, to Oath Keepers, the Patriot Movement, Christian fundamentalists, and anti-immigrant vigilante groups. Encouraged by Trump’s imperial bravado and nationalist rhetoric, and his racist discourse, they began to cross-pollinate as they gained a toehold in the White House and in state and local governments. Para-militarism spread and overlapped with state repressive agencies.

This trend was demonstrated in 2016 in a military-style counterinsurgency against indigenous activists and their allies peacefully protecting water against the construction of the Dakota Access Pipeline near the Standing Rock Sioux reservation. Bankrolled by a consortium that included Wells Fargo and B of A, the company building the pipeline, Energy Transfer Partners, hired a mercenary firm known as Tiger Swan, which originated as a Pentagon contractor in the Middle East.

Trumpism and other neo-fascist responses around the world react to the global revolt of popular and working classes. In the US, repression against Occupy Wall Street, Black Lives Matter, the NoDAPL water protectors, and other movements signals a breakdown of control and erosion of the ruling group’s hegemony. Beyond the US, a global rebellion has been spreading since the financial collapse of 2008.

But in order to move beyond the multiplicity of fragmented struggles and spontaneity we need a revitalized critique of global capitalism and of the ‘liberalism’ of the transnational elite. The most urgent task right now may be a united front against fascism and global war. But for the fight back to be successful, it needs to have a sharp analysis of global capitalism and of its crisis, and a clear vision of an emancipatory project around which resistance can unite.

The global working class needs broad alliances. The reform of capitalism has historically come less from enlightened elites than from mass struggles from below that forced elites to reform. The best way to reform capitalism is a struggle against it. If reformism from above fails and if the Left is not able to seize the initiative, the road may be open for 21st century global fascism founded on the global police state to triumph.

Excerpts from the keynote speech given by Prof. William Robinson at the Nov 18 L.A. Ecosocialist conference, “Capitalism is killing us! A community forum on ecosocialist solutions to a warming world.” 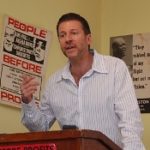 William I. Robinson – I am a professor of sociology at the University of California, Santa Barbara. I am also affiliated with the Latin American and Iberian Studies Program, and with the Global and International Studies Program at UCSB. My scholarly research focuses on: macro and comparative sociology, globalization and transnationalism, political economy, political sociology, development and social change, immigration, Latin America and the Third World, and Latina/o studies. As a scholar-activist I attempt to link my academic work to struggles in the United States, in the Americas, and around the world for social justice, popular empowerment, participatory democracy, and people-centered development.