Small Is Beautiful – A Contemporary Perspective

14 Jan 2019 – Ernest F. Schumacher, the German born British economist, wrote a collection of essays called Small Is Beautiful: A Study of Economics as if People Mattered in 1973. As its title suggests, he argued against the large capitalist economy that ill-treats the earth’s resources resulting in degradation of the earth and depletion of its resources. He also promoted a right type of education that recognizes the adverse impact of the capitalist system of economy. He pointed towards the widening gap of social and economic development between the rich western and the developing third world countries. He also urged the world to create a system that could

‘evolve a more democratic and dignified system of industrial administration, a more humane employment of machinery, and a more intelligent utilization of the fruits of human ingenuity and effort…’ 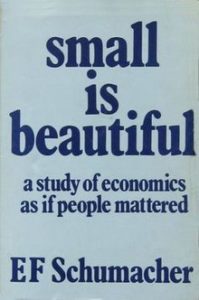 These concerns are valid in the contemporary world also with all economic and social indicators pointing towards the chasm between the richer and the poorer countries. This is evident in lack of basic requirements like food, shelter, education, health, employment facilities and other human rights. This despite the United nations proposing millennium development goals at the beginning of this century and now the seventeen SDGs (Sustainable Development Goals) that need to be globally attained by 2030 for a better, more humane world.

Apart from not meeting these requirements, the environment has become degraded to an extent that Schumacher could not have visualized; this is leading to adverse effects such as pollution of air, water, soil, climate change and global warming and submergence of several small islands and coastal regions being infested with saline water and chemical pollutants as sea levels rise. Moreover, several species of plants and animals have already become extinct or are at risk of becoming so.

There are several factors at play – globalization, rampant consumerism by wealthy people all over the world and a feeling that it is not Small but Big is Beautiful. Big mansions, big yachts, big luxury cars, bigger faster vehicles and a bigger military arsenal possessed by certain countries with USA as its global leader and promoter.

Bigger and more expensive marriage and birthday ceremonies are occurring. Even statues that are being erected are getting bigger and taller as demonstrated by the Statue of Unity that has recently been erected in Gujarat in the memory of Sardar Vallabhbhai Patel (1975-1950), the Deputy Prime Minister in Jawaharlal Nehru’s first cabinet. It is considered to be the tallest statue in the world. What could be the reason for this large-mindedness? There are some obvious explanations that one need not dwell here. Similarly, religious congregations of different faiths are tending to becoming bigger and more expensive and drawing bigger crowds. What lessons or values that such congregations promote are not easily discernable, but what is obvious is the chaos they create on the roads and the garbage they produce. 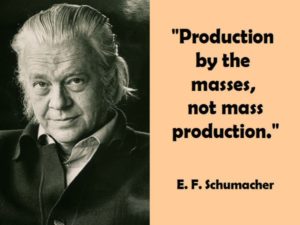 People remember participating in small religious gatherings earlier; they were smaller, better organized, people friendly and spiritually more meaningful. There was a small religious faith called Dev Samaj (meaning religious society) that was vibrant in western parts of India that are now part of Pakistan that used to attract smaller groups of people who shared common virtues of honesty, community life, simplicity and religious harmony. This institution also opened educational institutions promoting these values in addition to relevant education at school and college levels.

Similar organizations continued to flourish in other parts of India and also in other countries. One such was in Iran — established by a religious person named Bahaullah in 1863. It promotes unity of different religions and equality of all peoples. It faced persecution in Iran and its small number of followers moved to different countries including India.  The Baha’is have constructed a beautiful temple in South Delhi called Lotus Temple that is a joy to behold and gives a person a feeling of peace and serenity.

Another feature of modern ethos is to establish small but well-structured organizations named NGOs (Non-governmental organizations) that try to promote people’s welfare   in different areas — education, nutrition, shelter, skill formation etc. These supplement governmental actions and policies and are effective partly because they are small and better organized with clear objectives and smaller budgets. There are many such NGOs worldwide. Some of these are WWF, Non-Violent Peace Force, Citizens for Justice and Peace, and countless other bodies that promote various attitudes, values — promotion of Nonviolence, treating animals humanely and providing skills to the poor who cannot afford to attend formal institutes.

Other bodies or Trusts such as Balak Trust in India tries to pick up abandoned children from the roadside or railway stations, gives them a home, provides them food, skills and other necessities so that these kids grow up into good responsible citizens. The good intentions of some small number of people worldwide are able to be effective in their objectives, because they are smaller units, better organized and have small number of people working for their objectives in a cohesive effective manner.

Many of us are overjoyed by seeing small animals and birds – cats or dogs or parrots and try to make them our household pets. Another beautiful experience is to grow small plants in our homes and to see enchanting multicolored flowers emerging in them.

Thus we see that Small can be Beautiful even today if properly visualized and effectively implemented. Ernest Schumacher’s book is still relevant even after about half a century of its publication.

Anticopyright: Editorials and articles originated on TMS may be freely reprinted, disseminated, translated and used as background material, provided an acknowledgement and link to the source, TMS: Small Is Beautiful – A Contemporary Perspective, is included. Thank you.