13 Feb 2019 – India has long undervalued one of its most precious resources—water. Today the country’s chronic mismanagement of water has led to drought in nearly 200,000 villages. According to the World Bank data, Indian farmers use almost 70 percent of the total groundwater that is drawn in the country each year. Shockingly, India uses more groundwater annually than China and the United States combined. Due to this massive overuse, groundwater levels are being depleted all over the country by an average of 0.3 meter per year.

Traditional water harvesting techniques have been employed for nearly 1,500 years to conserve water for cultivation. These systems continue to remain viable and cost-effective alternatives for replenishing depleted groundwater aquifers. This traditional knowledge and wisdom, however, have been abandoned in the race to embrace new technologies which have upset the ecological system. With government support, these systems could be revived, upgraded and productively combined with modern techniques.

Sikandar Meeranayak, the founder of a non-profit called Sankalpa Rural Development Society (SRDS) based in Hubli, Karnataka, is one of those working tirelessly and silently to assist farmers to understand the importance of sustainable water management. Meeanayak’s silent crusade caught international eyes and he was awarded the Energy Globe World Award 2018 in the Category Water for his innovative development of the twin ring method of rain water harvesting through bore well recharge at the international award ceremony at Yazd in Iran, on 28th January this year. This technology was recognized by the jury as a solution to the sinking groundwater levels and water, and food undersupply due to the non-sustainable cultivation. 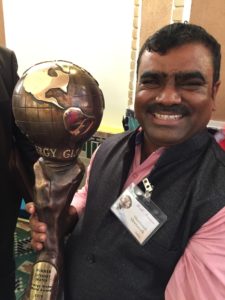 Wikipedia states: “The herculean status of the Award often equates it to Nobel Prize.”

The Energy Globe World Award shows solutions from all over the world to our environmental problems and is the world’s most prestigious environmental award.  Meeranayak’s work was chosen from over 2300 entries from 182 countries. A great achievement for a young man with a passion for water. Energy Globe, a private Austrian initiative, celebrated its 20th anniversary this year. The success of this initiative is visible in its database with over 20 000 sustainable projects, all of which offer different solutions to our environmental problems.

This is the story of a young man from a hamlet (in the Gadag area in Hubli in the southern Indian state of  Karnataka) who as  a child, along with other inhabitants of the  village ,struggled to procure  water during drought time – often walking 3-4 km to carry water from a farm supply which was shared by livestock and cattle.  A source of water that was often not clean. 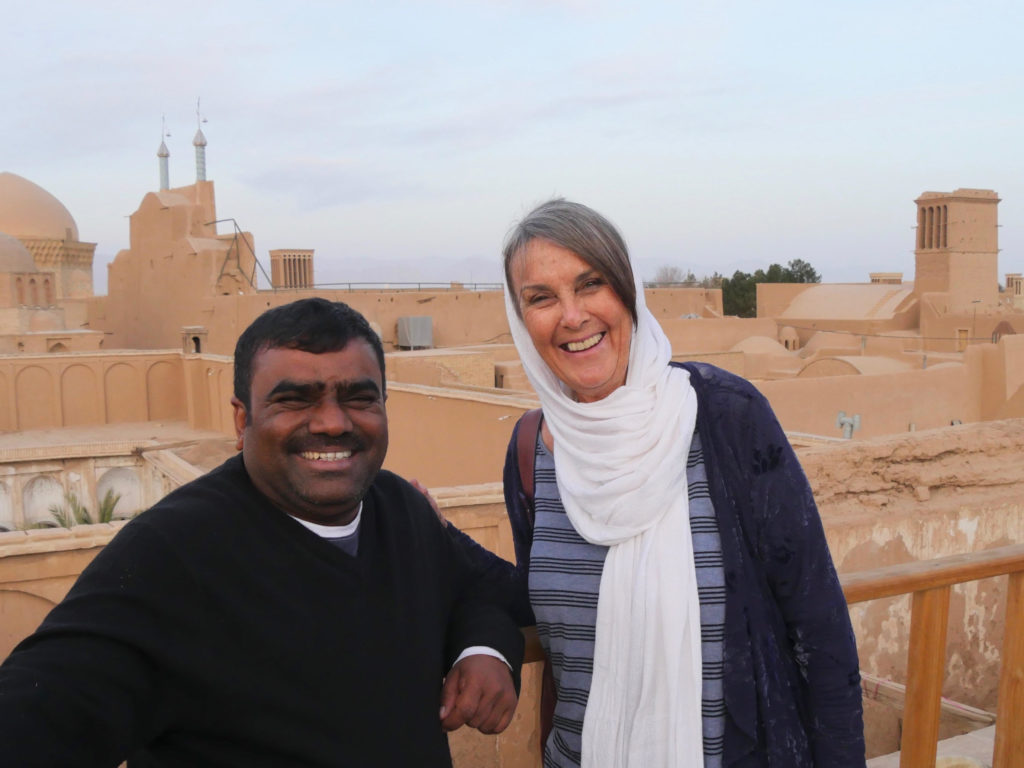 Meearnayak’s father was a subsistence farmer and all those around him tried valiantly to feed their families from holdings as small as one and a half acres.  Meeranayak pondered, how could he make a difference and, despite his father’s wish for him to go into the security of government service, he took up study and explored his way into the world of social entrepreneurship.  At the age of 26 he set up a non-profit- the Sankalpa Rural Development Society.  Sankalpa means a single–minded resolve to focus on a specific goal- and Meeranayak’s goal was water.

Meeranayak has implemented over 1500 rainwater harvesting structures for farmers as well as industrial sites, schools, and urban housing complexes. Meeranayak’s method is to channel the monsoon rains back through borewells into the underground aquifers where it can be conserved for future use. Even borewells that had dried up are being replenished through the method after only one decent rainfall. “I have always been passionate about solving water troubles,” says Meeranayak, who grew up in a drought-prone region. The aim of SRDS is to lower the cost of existing irrigation technology using innovations tailored to the needs and conditions of local farmers.

While Meeranayak has been a grassroots revolutionary, the work was strengthened by the entry of an Australian development activist, Shazar Robinson into the SRDS fold four years back.   she joined SRDS as a volunteer and advisor in 2016. She travels to India regularly to assist the work for water working in India for 2-3 months at a time.  Her work continues even when in Australia as she helps with fundraising and online media needs for SRDS. Her direct experience working with local people in villages and farms over the past ten years has been very rewarding for her. Her primary focus is on water – and helping people to understand the essential need to respect and value all of the water on Earth.

The SRDS method of borewell recharge uses a catchment pond that can collect and store up to three lakh litres of rainwater. The catchment pond is a 10x10x10 foot pit that acts as a primary filter around the borewell and has a casing pipe with tiny holes to allow water to percolate in and out without any loss to the borewell. “When we began operations,” says Meeranayak, “nearly 70 percent of Hubli’s borewells had run dry and many farmers were selling their lands to pay off debts”. Today, SRDS has recharged hundreds of borewells across Andhra Pradesh, Karnataka, Maharashtra, Punjab, and Uttar Pradesh. Besides implementing their water replenishment systems, the SRDS team also educates farmers on post-recharge maintenance and care. 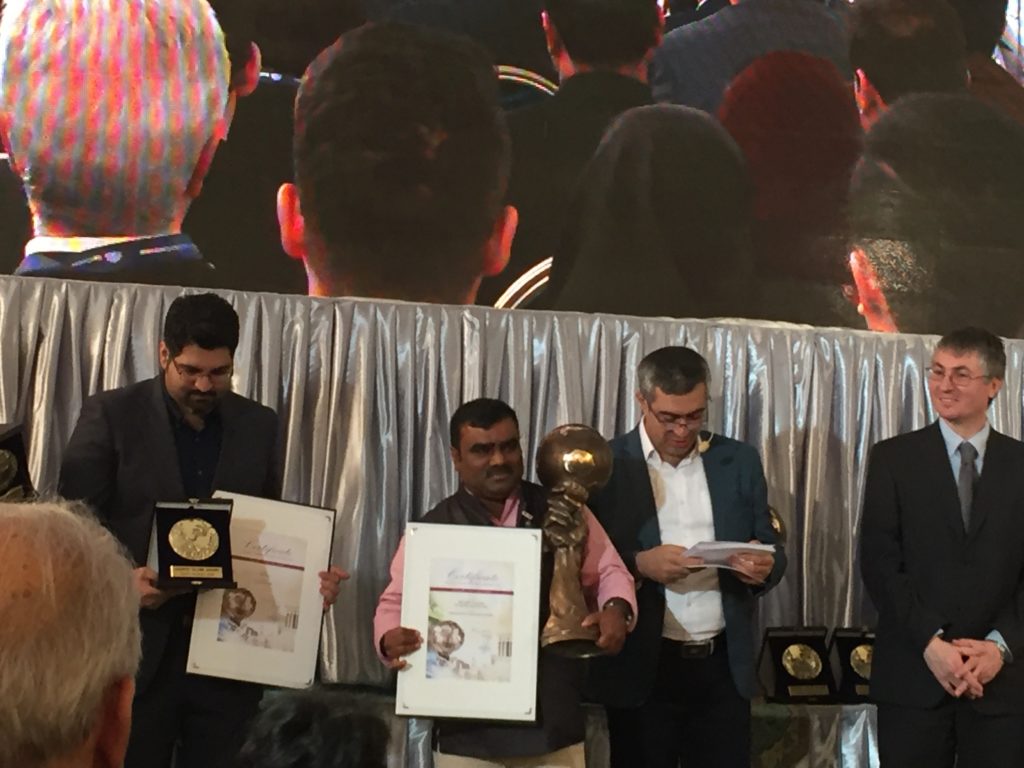 Shashank is a farmer in the Sira district of Karnataka whose life has been transformed through Meeranayak’s efforts. Ten years ago, he dug a borewell; for three years it provided water but with depleting vigour each year. When Shashank’s borewell finally dried up, he was forced to reduce his cultivation to one crop per year. He became totally dependent on rainfall, his income fell, and he decided to abandon his land to search for work elsewhere. It was then that he heard about the SRDS recharge method. At a cost of approximately Rs 15,000—his share of the total Rs 30,000—a feeder pond was built and the rainwater harvesting system was installed in Shashank’s dry borewell. When the rains came, the pond filled with water. Soon afterwards, he refitted the pump to his bore well—and was overjoyed to find water gushing out. This year, he will be able to grow two crops again and fully irrigate his land.

This story is not unusual, it has been repeated many times over in more than 90 percent of the implemented borewell recharge projects. The direct borewell recharge technique has seen a profound increase in ground-water levels and yielded many other benefits. With the confluence of pure rainwater, the quality of the existing groundwater improves, marked by a decrease in solids and toxins, and the hard water is made usable. Erosion of precious topsoil is also arrested as the runoff water from the farms and open fields are channelled to the recharge pits. The increased availability of water enables farmers to gain multiple crop cycles and diversify the crops grown leading to increased harvests. The growth of crop yields and the resultant growth in rural prosperity also adds to the employment possibilities for the landless and the underprivileged.

There is also good news for the environment. In regions where multiple recharge projects have been set up, there had already been a marked reduction in the demand for new borewells. After Meeranayak’s first success, the idea spread like wildfire in the nearby water-starved villages. The amount of land under cultivation has grown manifold and farm incomes are rising. For work, men no longer need to leave home, and women need walk no farther than their village for water.

The method is simple, works well and is cost-effective. In brief, the process is as follows:

This borewell recharge technique can be easily replicated and implemented anywhere in rural or urban areas at an affordable rate. Moreover, it can be customised according to local needs and geographic conditions. The work is done on a shared cost basis with the farmers—they chip in with materials and labour to contain the cost—and the final cost is only a fraction of what is required for a new borewell.

The system fails only if the monsoon rains fail. Even if the feeder pond fills three times during the rainy season, the aquifer will be recharged. Borewell recharge is a permanent solution that allows farmers to irrigate between six and nine acres of land and grow three or four different crops per year. There are also supplementary benefits. When a borewell is recharged, the moisture in the surrounding land becomes denser, allowing farmers to grow additional vegetables and fodder so that the nutritional needs of the family and livestock can be provided for, apart from the main crop.

A lot of good ideas got their start when one individual looked at a familiar landscape with fresh eyes. People like Meeranayak have shown there are easy, sustainable methods for mitigating India’s water scarcity crisis. There are undoubtedly many viable solutions to be found if we are willing to think out of the box.

If you would like more information about this topic please call Sikandar Meeranayak on +91 9986840730 or email at info@srdsindia.org.

Anticopyright: Editorials and articles originated on TMS may be freely reprinted, disseminated, translated and used as background material, provided an acknowledgement and link to the source, TMS: India’s Invisible Water Wizard Conquers the World, is included. Thank you.