As many people know, the Indian government and various institutions are celebrating Gandhi’s 150th anniversary with great joy and gaiety. The celebrations are taking various forms — seminars, talks, exhibitions, plays and skits by students of various academic institutions etc. The objective of these events is to demonstrate various aspects of Gandhi in an attractive and easy to understand manner.

Gandhi as the world knows had many positive attributes that are still relevant even after seventy years of his death. He was a person who propagated and practiced ahimsa (nonviolence), truth, religious amity, Satyagraha, peaceful demonstration, cleanliness, simple lifestyle and love for Nature among his several attributes. These were apart from his political strength that helped India to free itself from British yoke in 1947.

The Indian government has been innovating several schemes to foster cleanliness in the environment by its Swach Abhiyan (cleanliness ) drive and construction of public toilets to make several regions,  especially in rural areas, ODF (open defecation free). Other measures — construction of roads, provision of electricity, potable water and many other schemes have also been undertaken, although these are not directly related to Gandhian values.

There are several institutions such as Gandhi Museum and Library, Gandhi Bhawan (in University of Delhi) that are also engaged in depicting several aspects linked to his life and activities. This is especially important for the younger generation who have heard about Gandhi and studied about him in their schools or Colleges, but don’t really comprehend the many sides of this great Indian icon, and how he continues to be relevant and a source of inspiration.

All Indian currencies carry Gandhi’s photo; his statues adorn most towns worldwide including in Pietermaritzburg in  South Africa where he was thrown out of the first class coach in 1893 because it was reserved for whites only. Another interesting event is the short skits (plays) performed by school children depicting some feature of Gandhi.

Apart from these events celebrating Gandhi in various forms, there is also a  skit organised on the Dandi March in 1930 that started from the Sabarmati Ashram in Ahmedabad to the coastal sea town Dandi from where Gandhi and his followers tried to pick some salt. The police beat Gandhi and his followers as they try to pick up some salt from the sea. The police use some small sticks and try to beat the demonstrations one by one. The police, the demonstrators and Gandhi himself are played by small school kids. The shouts and shrieks of these children as they are beaten by other children are interesting and many students watching them try to shout with demonstrators in their support.

Whenever Gandhi spoke on some occasion before the public, he would also have some people singing Bhajans (religious songs) in praise of God, religious amity and humanity. One of the famous bhajans that was dear to him is Raghupati Raghav… This is usually sung at the conclusion of the event.

The Gandhi Bhawan of Delhi University had a musical programme about ten days back on March 3 in which a professor of Music in one of the University’s Colleges, Dr Prerna Arora had been invited to sing some bhajans that were dear to Gandhiji. She came with some accompanying musicians — flute, harmonium players and a tabalchi (player on the Indian drums called tabla) and some students of her college.

Prerna and her team regaled the audience present (including myself) with several wonderful and soulful bhajans. Everyone enjoyed the musical programme. As always, Gandhi’s favourite bhajan was also sung with great enthusiasm not only by Prerna and her accompanying musicians, the College students, but also by the audience. Altogether an inspiring and soulful event that reminded us about the many shades of Gandhi including his love of Bhajans.

The accompanying photographs give a glimpse of the team of musicians and music students. Prerna Arora herself can be seen wearing a blue sari and blue sweater. 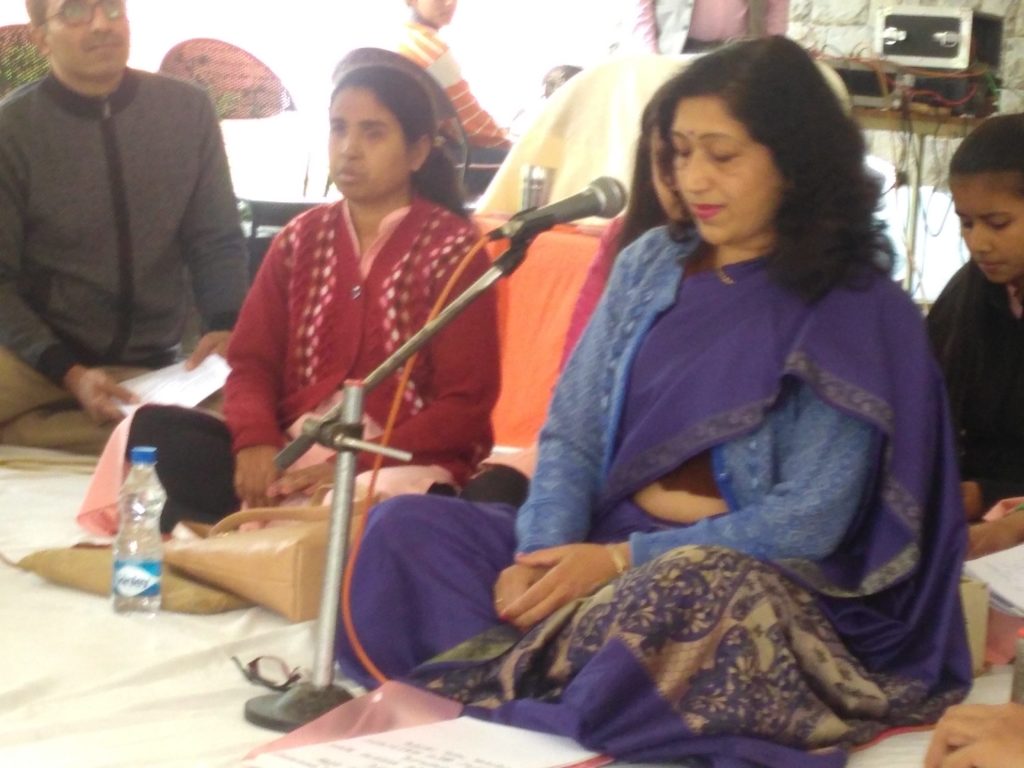 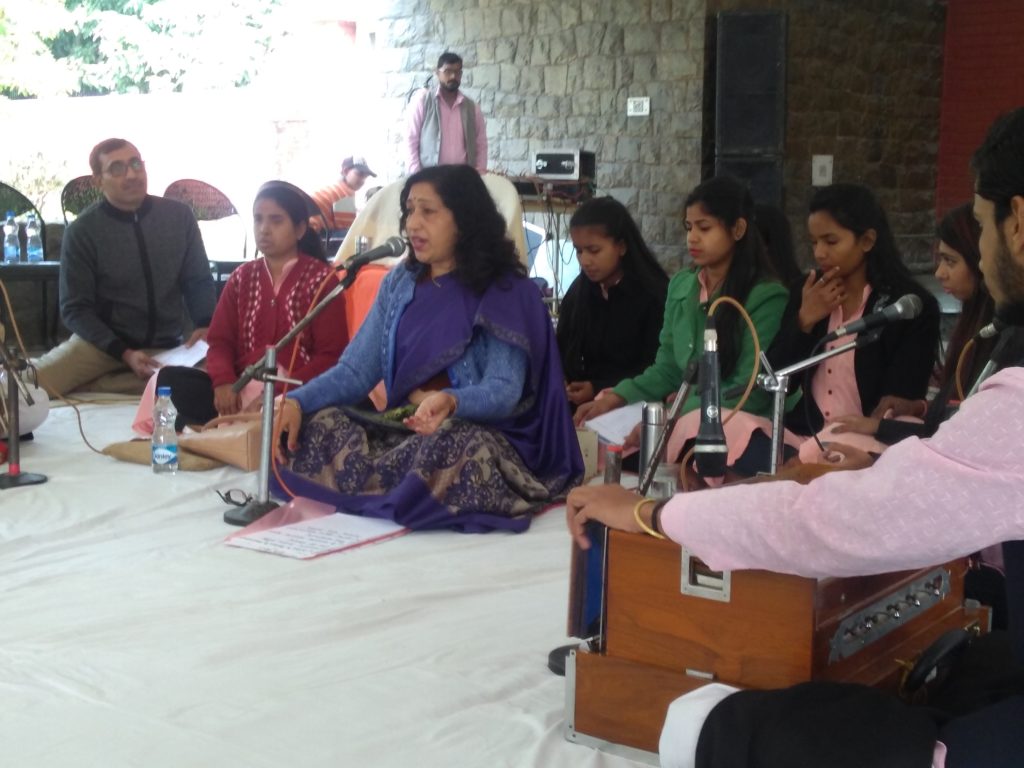 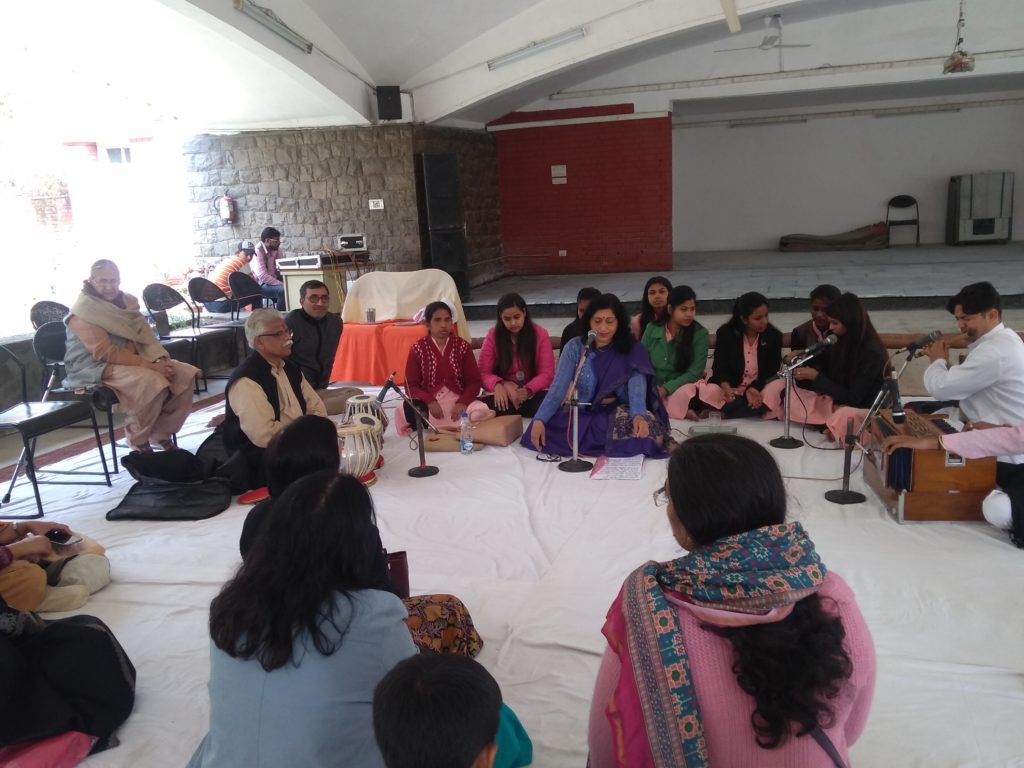 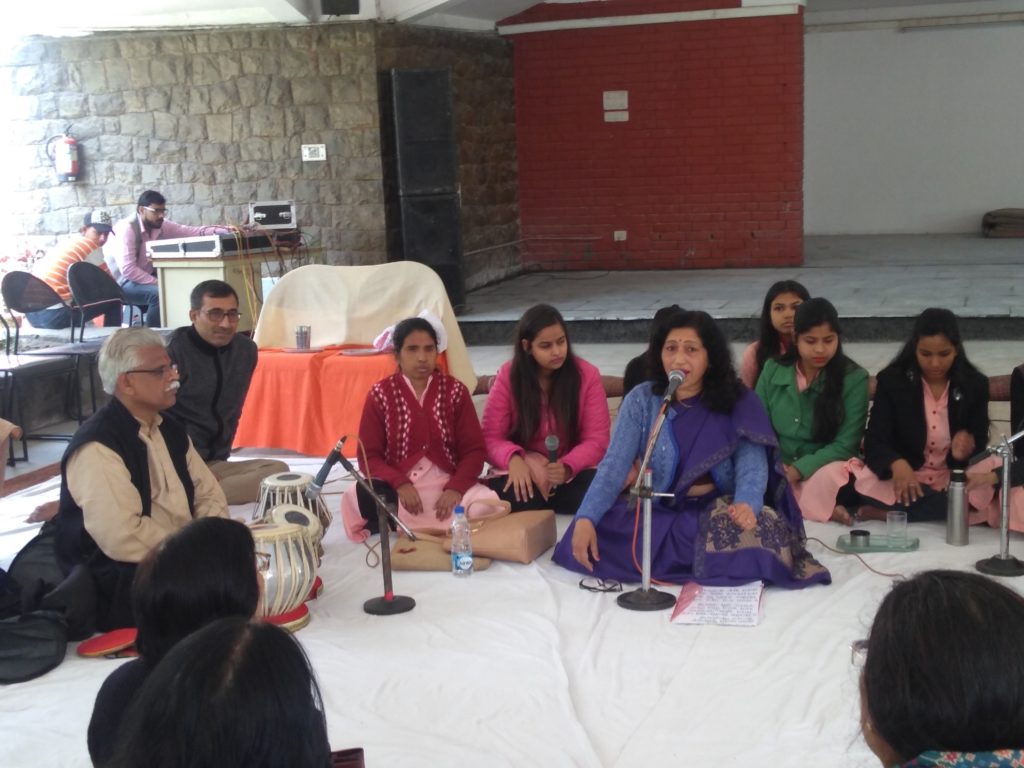 Anticopyright: Editorials and articles originated on TMS may be freely reprinted, disseminated, translated and used as background material, provided an acknowledgement and link to the source, TMS: Celebrating Gandhi Anniversary Musically, is included. Thank you.