Brunei Introduces Death by Stoning as Punishment for Gay Sex 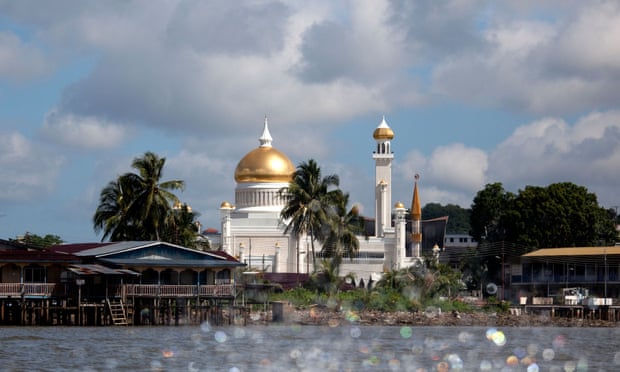 The new law is a directive from the Sultan of Brunei, Hassanal Bolkiah.
Photograph: David Cantrille/Alamy

28 Mar 2019 – Brunei is to begin imposing death by stoning as a punishment for gay sex and adultery from next week, as part of the country’s highly criticised implementation of sharia law.

From 3 April, people in the tiny south-east Asian kingdom will be subjected to a draconian new penal code, which also includes the amputation of a hand and a foot for the crime of theft. To be convicted, the crimes must be “witnessed by a group of Muslims”.

Brunei, which has adopted a more conservative form of Islam in recent years, first announced in 2013 its intention to introduce sharia law, the Islamic legal system that imposes strict corporal punishments.

It was a directive of the Sultan of Brunei, Hassanal Bolkiah, who is one of the world’s richest leaders with a personal wealth of about $20bn (£15bn) and has held the throne since 1967. He described the implementation of the new penal code as “a great achievement”.

Alcohol is already banned in Brunei, as are showy Christmas celebrations, and there are fines and jail sentences for having children out of wedlock and failing to pray on a Friday. However, a heavy international backlash against Brunei imposing some of the more brutal sharia punishments has slowed their full implementation over the past five years.

In 2014, Brunei’s promises to implement sharia law prompted protests in Los Angeles, outside the famed Beverley Hills hotel and Hotel Bel Air, both of which were owned by the oil-rich nation. The hotels were accused of the “height of hypocrisy” for offering packages to LGBT couples, while being bankrolled by a country that has condemned homosexuals to death.

Brunei was a British colony until 1984 and the two countries still enjoy strong ties. Homosexuality has been illegal in Brunei since British colonial rule but under the new laws it is now punishable by whipping or death by stoning rather than a prison sentence. Capital punishment will also apply to adultery and rape.

The announcement that sharia law is to be rolled out from next week, specifically targeting the gay community, was met with horror by human rights groups. Amnesty International urged Brunei to “immediately halt” implementing the penalties, which they said were “deeply flawed”.

Rachel Chhoa-Howard, a Brunei researcher at Amnesty International, said: “As well as imposing cruel, inhuman and degrading punishments, it blatantly restricts the rights to freedom of expression, religion and belief, and codifies discrimination against women and girls. To legalise such cruel and inhuman penalties is appalling of itself.”

She added that some of the potential offences “should not even be deemed crimes at all, including consensual sex between adults of the same gender”.

The UK’s international development secretary, Penny Mordaunt, said: “No one should face the death penalty because of who they love. Brunei’s decision is barbaric and the UK stands with the LGBT community and those who defend their rights. LGBT rights are human rights.”

Gay rights groups pointed out that 2,000 British troops are stationed in Brunei and the UK is urgently seeking a new trade deal with the oil-rich country. The British trade envoy for Brunei, Paul Scully, was in the country in October for talks, and there have been calls for him and the Foreign Office to join Mordaunt in condemning the plans.

The sharia law would apply only to Muslims, who make up about two-thirds of the population.

The sultan, despite the austere religious laws governing moral behaviour in Brunei, was embroiled in a scandal involving his brother Prince Jefri Bolkiah, who embezzled $15m from the state during his tenure as finance minister in the 1990s, leading to a long-running feud between the pair.