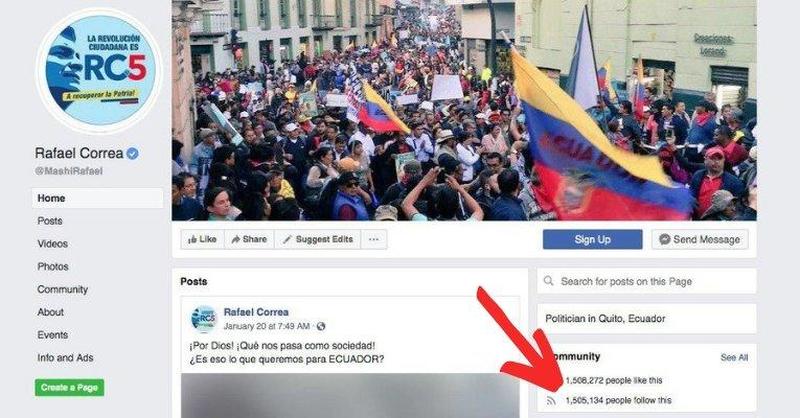 In a statement republished by Ecuadorean newspaper El Comercio, a company spokesperson said:

“Protecting the privacy and security of people is central to Facebook [and] we have clear policies that do not allow the disclosure of personal information such as phone numbers, addresses, bank account data, cards, or any record or data that could compromise the integrity physical or financial of the people in our community.”

The move comes on the same day that Ecuador’s government allowed British security personnel to enter their embassy in London to arrest journalist and WikiLeaks founder Julian Assange, who has been sought by U.S. officials for years due to his role in releasing scandalous information implicating Washington in a range of crimes, including war crimes.

Assange, 47, had been living at the Embassy of Ecuador in London since 2012, when then-President Correa granted political asylum to the Australian amid the British government’s attempts to detain him. At the time, Correa called Eduador’s actions an act of sovereign “duty.”

Ecuador’s current leader, Lenin Moreno, was openly opposed to Assange, whom he referred to on various occasions as a “miserable hacker,” an “irritant,” and a “stone in the shoe” of his government. Moreno’s distancing from the asylee came following a 2017 meeting with Trump campaign confidant and political “fixer” Paul Manafort, where the two discussed Ecuador’s handover of Assange to U.K. and U.S. authorities.

The account number for the offshore account allegedly used by the president to launder money was shared across Ecuadorean social networks by netizens of all political stripes, including by Correa – who had about 1.5 million followers and whose Facebook page enjoyed more interactions and attention than that of President Moreno himself.

The account number was also shared alongside personal photos of President Moreno enjoying lavish breakfasts and dinners of lobster—imagery considered especially damning for the people of Ecuador given Moreno’s previous boasting of an austere poverty diet consisting of eggs and white rice. 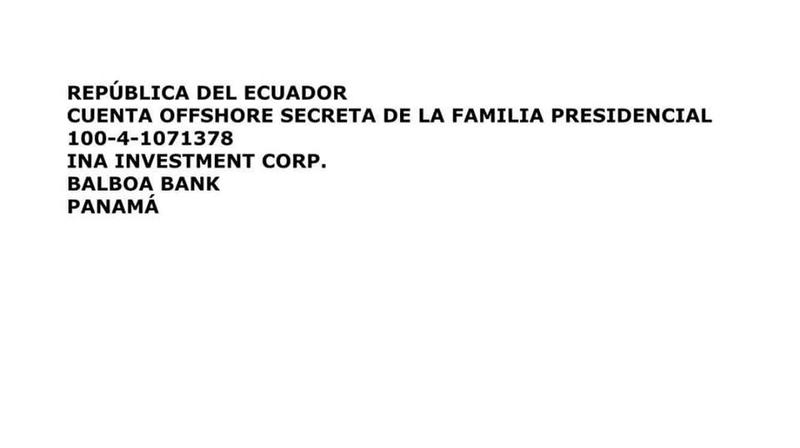 Information on the bank account allegedly used by Ecuador’s president to launder money.

It also came amid attempts by the neoliberal Ecuadorean government to curry favor with financiers in Europe and the United States amid the continuing debt crisis. In March, the IMF finally bailed out Moreno’s government to the tune of $4.2 billion.

Prior to the removal of the page, Correa lambasted his successor in a series of posts that still remain on Twitter at the time of this writing.

Christine:
I do not know what to tell you. I only ask forgiveness from me and my people. A traitor and corrupt like Moreno does not represent us. I promise not to rest until I see him in jail, where he deserves to be. https://t.co/DqH0HiaIMP

Since 2015, Correa—who lives with his family in Brussels, Belgium—had used the social platform to great effect, using strongly-worded posts, video interviews, and live-streams as a platform amid the Ecuadorean media’s de facto blackout of the former leader, who remains reviled by the center-right former opposition and sections of the country’s left.

Former President Correa minced no words in his assessment of Moreno, denouncing him in an English-language tweet as “the greatest traitor in Ecuadorian and Latin American history … Moreno is a corrupt man, but what he has done is a crime that humanity will never forget.”

The greatest traitor in Ecuadorian and Latin American history, Lenin Moreno, allowed the British police to enter our embassy in London to arrest Assange.
Moreno is a corrupt man, but what he has done is a crime that humanity will never forget. https://t.co/XhT51MA6c6

In a separate tweet responding to Moreno’s announcement of the handover, Correa further tore into what he called “one of the most atrocious acts [and the] fruit of servility, villainy and revenge.”

“From now on worldwide, the scoundrel and betrayal can be summarized in two words: Lenin Moreno,” the popular former president added.

The removal of Correa’s page for violating Facebook’s “community standards” is an unprecedented move, and the former statesman is the most high-profile public political figure to ever be removed from the social platform–placing the economist and icon of Latin American “socialism of the 21st century” in the same unlikely category as right-wing conspiracy theorist and broadcaster Alex Jones.