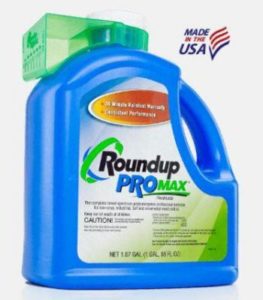 Roundup, made by Monsanto, is the best-selling weed killer in the world. Farmers and others have filed a lawsuit in federal court in San Francisco, claiming Monsanto failed to warn that exposure to Roundup could cause non-Hodgkin’s lymphoma, a type of cancer.
Photo courtesy of Monstanto

“Clearly, the testimony that informed the jury’s decision was Bayer-Monsanto hiding Roundup’s carcinogenic properties, manipulating the science and cozying-up with EPA so it would not have to warn consumers of its dangerous product,” said EWG President Ken Cook. “Bayer-Monsanto has known for decades the cancer-causing properties of Roundup and I applaud the jury for holding the company accountable for failing to warn consumers of the known danger.”

“This verdict puts Bayer’s back firmly up against the wall as the cost of litigation mounts and its stock price gets pummeled once again,” said Cook.

Glyphosate is the most heavily used herbicide in the world. People who are not farm workers or groundskeepers are being exposed to the cancer-causing chemical.

A 2015 EWG analysis mapped the year-to-year growth in glyphosate use on American farmland from 1992 to 2012. According to the Department of Agriculture, in 2014, approximately 240 million pounds of glyphosate were sprayed in the U.S. As a result of widespread spraying, glyphosate has now been found to contaminate air, water and soil across vast expanses of the U.S. It also shows up in the food Americans eat every day.

Biomonitoring studies in a number of states, especially in the Midwest, found glyphosate in the bodies of children and pregnant women. According to initial data from a study in Indiana, women who were more heavily exposed to glyphosate during pregnancy were more likely to give birth to premature babies who weighed less than average.

Although the vast majority of glyphosate is applied to genetically modified corn and soybeans, it is increasingly being sprayed on oats just before harvest as a drying agent, or desiccant. Glyphosate kills the crop, drying it out so it can be harvested earlier than if the plant were allowed to die naturally. This allows easier harvesting but also increases the likelihood that the pesticide makes it into food.

Two separate rounds of laboratory tests commissioned last year by EWG found glyphosate in nearly every sample of popular oat-based cereals and other oat-based food marketed to children. The brands in which glyphosate was detected included several cereals and breakfast bars made by General Mills and Quaker.