Apr 2019 – Less than a year ago I had scarcely given a thought to the Apollo Moon missions, except perhaps in the occasional musing about why it had been so long since a return. Then, goaded by a chance event, I decided to look into them more closely, the result of which was the surprising conviction that indeed the Apollo lunar landings were ‘the greatest deception of them all’. 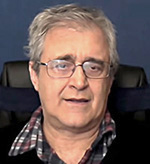 Massimo Mazzucco, the Italian-born photographer and filmmaker is no stranger to deceptions. In his documentary work he has sought to expose and confront some very big ones indeed, and his work on 9/11 is, in my opinion, the most comprehensive rebuttal of the official narrative of the events of that fateful day. In a film that is five hours long he presents virtually every detail of significance, and he does so somewhat uniquely because he allows both sides of the debate to air their views. While there is no question that his own investigation concludes that the official story is a fiction, the methodology of point-counterpoint allows for transparency and clarity.

Mazzucco brings his considerable talents and this methodology to tackling the Moon landings, and the result is American Moon, a 3 ½ hour long documentary that is clear, comprehensive and utterly damning. It is, in my opinion, impossible for a viewer of this meticulous film to continue to harbour the illusion that the manned lunar missions of the late sixties and early seventies were anything other than an immense and grandiose propaganda stunt.

Is it a ‘final word’? Hardly – because the more one investigates Apollo the more one discovers, and the more preposterous and unbelievable are its claims. Scott Henderson, for example, with his exhaustive focus on the NASA photographs, seems to find more and more hitherto undiscovered instances of fiction such as, for example, a steam pressure gauge within the lunar module cockpit, as he discusses in an interview with Jim Fetzer.

There are now so many so-called smoking guns – the phoney Apollo 11 photograph of the Earth revealed by Bart Sibrel in A Funny Thing Happened on the Way to the Moon, and by David S Percy in What Happened on the Moon? (at 12mins 30) – the wet, drying flag to which Henderson called our attention in his Apollo Photo Studies, the Van Allen radiation belts, the analyses of the NASA photography exhaustively detailed by Bennett and Percy in their 1999 book Dark Moon, the incomprehensible Apollo 11 Post Flight Press Conference, the question of lunar dust, etc – that the challenge for those of us who wish to reveal the truth about Apollo becomes one of selection. 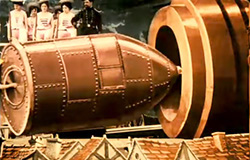 Mazzucco’s film is divided into five major sections (after a clever introduction that juxtaposes NASA footage with Georges Méliès’ early and obviously fictitious 1902 film A Trip to the Moon):

Mazzucco sets the context for the space race, the tremendous propaganda machine behind it, and then he proceeds to look at the major elements for and against the landings.
It would be counterproductive for me in this review to present a point-by-point summary – this is what the film is for – but I would like to mention some of the highlights because they have included information that may be new even to seasoned researchers, or presented in such as way as to lend exceptional power.

For example, he has uncovered in his own research an extraordinarily revealing conversation between JFK and NASA Administrator James Webb, wherein JFK quite pointedly inquires about the utility of manned versus unmanned missions. JFK is highly skeptical, but Webb persuades him that putting a man on the Moon ‘really is a start’. He also covers the highly critical Phillips and Baron reports of the Apollo program, and he presents the Apollo 1 disaster, which claimed the lives of Grissom, Chaffee and White in a particularly poignant way. Webb’s resignation, followed by NASA Deputy Director Robert Seamons’ shortly thereafter, on the very cusp of achieving their dreams, become palpably suspicious.

Mazzucco does not shy away from inspecting very fine details, and as a result of his exhaustive investigations he has revealed an exceptionally enlightening instance of fraudulence in the communications between Houston and our men on the Moon in Apollo 15: an audio delay that is NOT long enough to be genuine in the original audio recordings on Spacecraft films – which is mysteriously ‘corrected’ in the reloaded Apollo Journal clip.

He confronts and demonstrates an impossibly waving flag. He discusses the problem of dust. He gives voice to the debunkers of Clavius, Windley, the Italian NASA spokesperson Paolo Attivissimo, only to destroy their counter arguments with facts. In the matter of the MythBusters who ostensibly demonstrated that the lunar footprints were real, Mazzucco uses their own findings to undermine their conclusions: the definition and form of the footprints in the Apollo photographs are very different from the ‘vacuum chamber’ experiment conducted by the MythBusters. Such definition could only have been accounted for by the presence of moisture.

An especially hilarious segment takes a close look at the Lunar Module’s ill-fitting panels and ubiquitous and haphazardly applied reflective tape. Indeed, how we could have believed that such a shoddily constructed machine could ever have left the backyard of a high school science project is a question for another day.

In what may perhaps be a uniquely compelling aspect of his film he consults world-renowned photographers Toni Thorimbert, Aldo Fallai, Oliviero Toscani and Peter Lindbergh – and he asks these veterans to analyse without prejudice the famous Hasselblad photographs. They do so, and the results are eminently clear and unanimous: they could NOT have been taken on the lunar surface.

Mazzucco has in effect brought to light every major aspect of the missions: NASA’s capability for simulation, the missing telemetry data, the impossibility of stable video signals from the Rovers, the magic Ektachrome film that could withstand extreme temperatures and radiation, to name a very few – and he allows us to examine the evidence and incontrovertibly demonstrates that something was very rotten in the state of America.

To his great credit he is also at pains to correct false arguments espoused by some against the Moon missions, explaining why there should be no stars in the lunar photos because of camera exposure times. This lends his film even greater authority.

Mazzucco, fittingly enough, ends his encyclopedic journey with a nod to Sibrel’s Astronauts Gone Wild and the failure of Neil Armstrong, Buzz Aldrin and Michael Collins, the Apollo 11 team, to swear on the Bible that they had walked on the Moon.

Could Mazzucco have acknowledged more explicitly the massively important work of others before him? Possibly – then again, a film of this nature is not a doctoral dissertation, and this kind of homage would probably have weighed his work down.

I had hitherto compiled a small and idiosyncratic list of visual works to which I refer those in my circle who have open minds about matters of the Moon. They are:

Sibrel’s A Funny Thing Happened on the Way to the Moon
Collier’s Was It Only a Paper Moon?
Bennett and Percy’s What Happened on the Moon?
Wintzer’s Moon Hoax Now
The lectures of Marcus Allen

None of these is perfect or definitive, but they are each certainly compelling. American Moon, because of its thoroughgoing and comprehensive and relatively dispassionate nature, is now among them. Is it the final word? Of course not. But it might just be the most perfect antidote to the nauseating festivities NASA is cooking up for us this summer to commemorate the 50th anniversary of Apollo 11.

I most strongly recommend getting a copy and watching and inviting others to enjoy the work of a master documentarist unafraid to tackle the most controversial and grandest of illusions.

Disclaimer: neither Massimo Mazzucco nor Emanuel Garcia is a flat-earther.

Dr. Emanuel E. Garcia is a member of the TRANSCEND Network for Peace Development Environment, an American poet, novelist and physician who now resides in New Zealand. He may be contacted at emanuelegarcia@gmail.com.